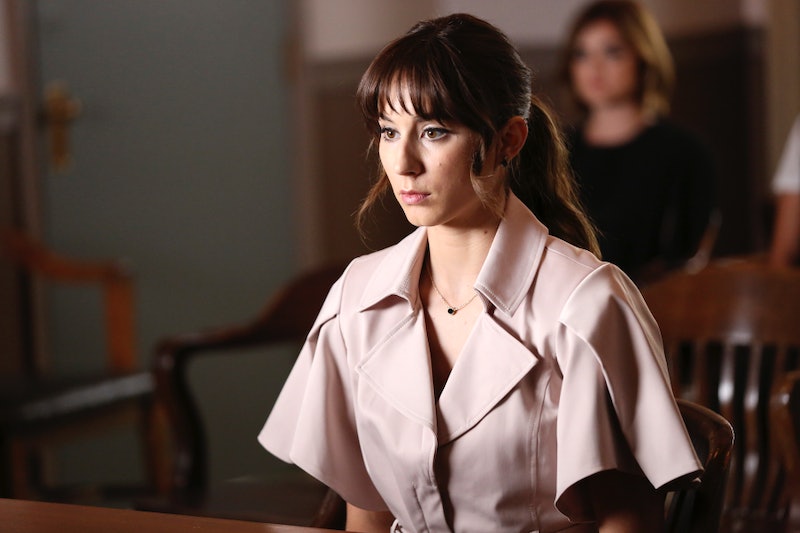 Twin talk has long pervaded the Pretty Little Liars universe — after all, in the books [spoiler alert!], Ali's evil twin Courtney is eventually revealed to be Big A. Now, after six seasons and a heckuva lot of twin hints, a bonafide identical twin is finally coming to Rosewood according to I. Marlene King's Twitter. Which PLL character has a twin, though? At this point, it could be anyone's, but for a few reasons, I'm starting to think Spencer might be the Liar with the twin.

Why, you ask? Well, first off, a Spencer Hastings double was spotted on the set of Pretty Little Liars, according to Reddit user bAnita189. Of course, doubles don't necessarily spell "EVIL TWIN" — they can be used for everything from lighting to reshoots — but there might be something to this particular sighting. If you look closely at the ultra-grainy shot, you can see what looks like Troian Bellisario on one side of the room, and another figure who looks eerily similar in the corner. Now, if it was just a standard body double, why would it appear that they're filming a scene together? And even if they're not filming, why would they be wearing different outfits? If it was a standard stand-in, they'd be dressed the same, right? At this point, it's nothing more than speculation, but it's all definitely worth taking note of.

Even beyond the possible on-set twin sighting, Spencer having a twin just makes sense, and here are a few reasons why:

Everyone in Rosewood has secrets to spare, but the Hastings family has got just about everyone in town beat (with the possible exception of their kinda-sorta relatives, the DiLaurentis), so a secret twin for Spencer would pretty much be par for the course at this point. There's also Veronica's political campaign to consider — after all, the medical records unearthed last week by the opposition could just be the tip of the iceberg. A high-pressure campaign might just be the perfect time for an as-of-yet-unknown twin to surface.

She Could Be Hiding In Plain Sight

One astute Redditor Uber-A picked up on the fact that Spencer has uttered the phrase, "I hide in plain sight" not once but twice over the past couple episodes. Could it be a clue? It's outlandish, but not out of the question. Besides, one of the best possible outcomes of an identical twin entering the Rosewood universe would be the potential for a switcheroo — after all, [book spoiler] it is how it went down in the books. So, could Spencer's twin be hiding in plain sight... by masquerading as Spencer herself? It's certainly possible, especially with the five-year time-jump (and the new bangs).

Remember Ali's Halloween story about the twins (you know, one stabbed the other to death)? Well, they've long been the source of many a speculation, mostly centered around Hanna and Ali, since the girls in question were blonde. But, what if they were actually a Spencer clue? PLLTumblr account Analyzing A points out some similar beauty marks on the murderous twin/Spencer, and if you look past the blonde hair, they actually look much more similar to Spencer than they do to Ali or Hanna.

Bellisario Has Acting Chops To Spare

Never forget that they almost made Spencer A way back in Season 3 — it didn't end up panning out, but you know Bellisario would have played A to perfection. Maybe a twin could give us the best of both worlds — the righteous Spencer we know and love and the evil Spencer, who — let's face it — we'd also be sure to love. It would give Bellisario the perfect opportunity to play the villain she was born to play, without sacrificing Spencer's integrity (or, what's left of it after six seasons, anyway).

It's An Opportunity To Retcon Spaleb

And, last but not least? An evil Spencer twin/secret switcheroo could potentially be the perfect retcon device with which to erase Spaleb from our collective consciousness! Yay!