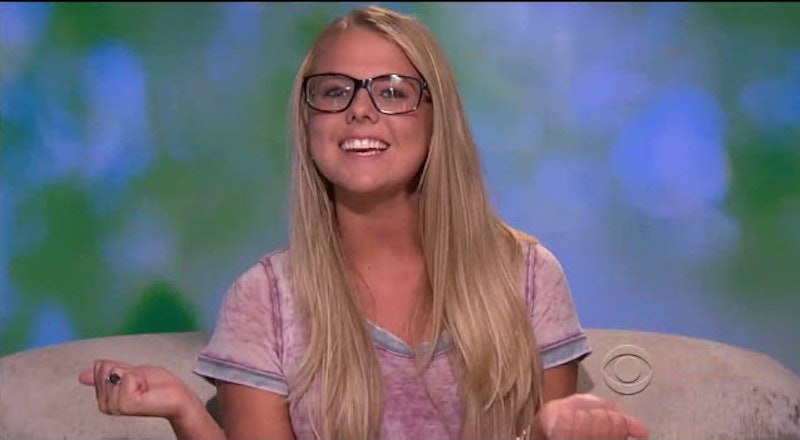 Big Brother kicked off its 18th season with four surprise Big Brother veterans returning to the house. The four returning houseguests, or as Julie Chen called them, "twist number one," surprised the 12 new houseguests after they had moved in and the first to emerge from hiding was Nicole Franzel. "I'm back and I am more excited than ever," she said. Nicole originally competed on Season 16, and she lasted 77 days in the house — when all was said and done, she came in seventh. Here's what happened when Nicole competed in Big Brother season 16.

A young nurse from Michigan, Nicole was pretty well liked in the Big Brother house, and she was also a pretty good competitor. Over the course of the season, Nicole won three Head of Household competitions (though she was dethroned twice) and re-entered the house from jury after an eviction. Nicole was also not afraid of entering a good alliance and showmance. Over her weeks in the competition, Nicole formed two alliances, The Weirdos and The Rationale, and engaged in a showmance with fellow houseguest Hayden. Hayden and Nicole reportedly took their romance out into the real world, with Nicole telling BuzzFeed after Season 16, "We are officially dating, so you can call us boyfriend and girlfriend." Alas, showmances don't fare well outside the Big Brother house, and Nicole has come back to the competition a single woman. "I'm single and ready to play for myself now," she said in the premiere.

Nicole's return to Big Brother might pose a problem for Paulie, whose brother, Cody Calafiore, also competed in Season 16 and contributed to Nicole's eventual eviction. Will Nicole go after Paulie as revenge? Maybe, but she might have her hands full with other rivals first.