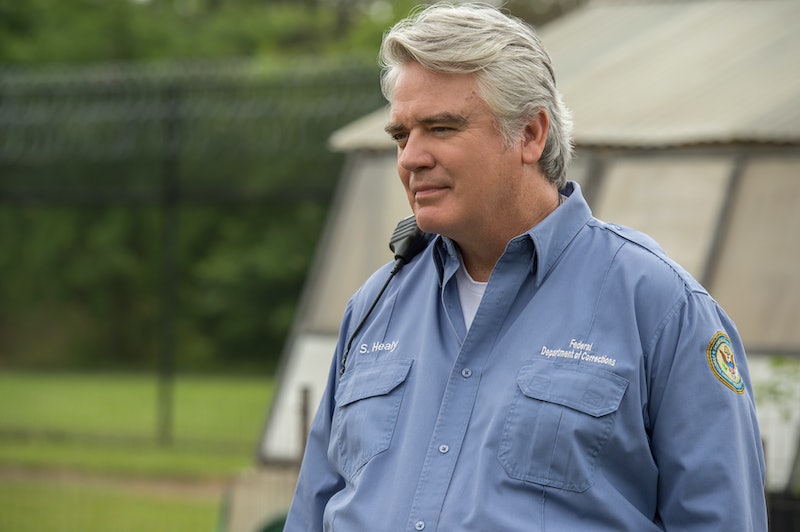 Warning: major OITNB Season 4 spoilers ahead. There's pretty much no denying that Orange Is the New Black Season 4 proved to be one of the darkest and dare I say depressing seasons this Litchfield group has yet to experience. And while it's easy to solely focus on the heartbreaking death that occurred at the end of Episode 12 (from which I still have yet to recover), it definitely wasn't the only tragic storyline to unfold throughout the season. One moment in particular that comes to mind is when Healy tried to commit suicide at the end of Episode 11 "People Persons."

After making a final phone call to his estranged wife, Katya, Healy threw the phone onto the sand and began walking calmly into the water with the clear intention to drown himself. Thankfully, his phone rang and sent him running out of the water, presumably thinking it was Katya calling him back. But even when it turned out to be work, Healy seemed to have come to his senses and realized that death wasn't the solution. But why was Healy attempting to kill himself in the first place? I'm afraid his sudden depression can all be boiled down to loneliness and a loss of purpose.

Ever since viewers were first introduced to Healy, he's tried his best to do what's right for the female inmates under his care. And yet, time after time, his attempts to help (as well intentioned as they are) continue to fail and it's left him feeling helpless and even insignificant, which he tried to explain to his ex-wife while leaving her a parting voicemail:

I know you felt that you couldn't talk to me, which is ironic because it's my job to talk to people, you know? It's... it's something I've always taken pride in, but it's beginning to feel like... like...I don't know, Katya, maybe... maybe I'm not very good at my job.

This was most recently reflected in his relationship with the inmate Lolly, whom he believed suffered from a form of schizophrenia, reminding him of the similar illness his mother used to have back when he was a child. So when Lolly confessed to killing someone at the prison, he wrote it off as part of her condition, believing it to be all in her head. But when the security guard's body was actually found in the garden, he realized that he'd completely misread the situation. Much like when his mother told him how she no longer wanted to undergo those lobotomies his father made her do, he didn't listen. He thought he knew what was right and it was proven to be wrong, forcing him to consider the fact that what he does no longer matters or makes any difference.

Healy couldn't help his mother and he ended up losing her. That's almost an exact parallel to what happens with Lolly when she gets carted off to the psyche ward. He'd grown to really like Lolly and hated that (in his eyes) he'd failed her. And it's that sense of powerlessness that caused him to walk into that water.

Thankfully, he now seems to recognize that in order to help anyone else, he needs to help himself first, which is why Healy checked himself into a mental hospital. I'm hoping this will help him to realize that killing himself isn't the answer and will allow him to do some serious soul searching so that he can return to Litchfield with a renewed sense of purpose. And given how things ended at the end of Season 4, these ladies are going to need him now more than ever.