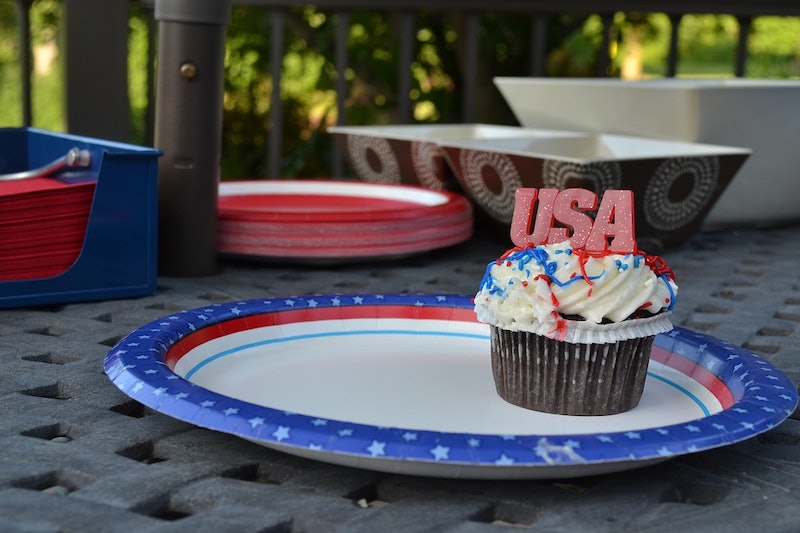 Last year, my dad had a Fourth of July revelation — from his porch, he had quite possibly the best view of the local fireworks, and before he knew it, neighbors came by to join him for the magnificent show. While many towns have a yearly fireworks display that brings the neighborhood together, a few of them don't, or just offer a less-than-stellar view on TV — and that's totally fine, since there are many ways to celebrate the Fourth of July without fireworks. And before you ask, no — the lame ones you can buy and light outside aren't a great option, unless you're really aching to accidentally blow your fingers off, or damage your neighbor's car. (Maybe that's the curmudgeon in me, but nothing grinds my gears more than half-drunk neighbors who don't really know what they're doing. There's a reason why many states have banned them.)

If you think about it, fireworks are to Fourth of July as a fireplace is to Christmas. It's nice, it sets the mood, but it's not mandatory. Think about it — the Yule Log program would have died out years ago if people didn't think it was a decent alternative. A lack of fireworks definitely doesn't mean that there should be a lack of celebration. Consider honoring America and our independence completely differently, with these fun ideas.

When was the last time you played dodgeball? Probably in middle school gym, right? The best thing about dodgeball is the fact that anyone can play, and the rules are pretty much stated in the title. Of course if dodgeball isn't your thing, there's also baseball (or tee-ball, if anyone you know has a stand), or soccer. By getting the neighbors involved, you can definitely get to know them a little better, and who knows? Maybe they'll be grateful, as they're also looking for an alternative activity to fireworks.

2. Dare your friends to show up in their most creative patriotic attire

Everyone has some red, white, and blue in their wardrobe. Invite your friends over, and hold a contest to see who can rock these patriotic colors best. Plus, having everyone blend in together means that you'll have some amazing shots for your Instagram account.

It's 2016 — put that ketchup and mustard away. There has been a surprising amount of creative hot dog combos that have been making the rounds recently, and if you live near a business that specializes in hot dogs, you might have had the opportunity to try one or two of them before. Why not try to recreate them at home? Chungah over at Damn Delicious has an amazing recipe for Sriracha guacamole dogs, and Emily from Endless Simmer posted an intriguing review of a hot dog slathered in peanut butter and bacon, which is another inspirational dog. It sounds weird, but in Emily's words, "this was the most distinctive and satisfying hot dog I've ever experienced."

4. Have a water balloon fight

Get some red, white, and blue water balloons, and go nuts. The Fourth of July is typically a hot and sticky holiday, so this activity will be both fun and hydrating. Unleash your inner child, and have a blast. This is especially good for people who don't own a pool.

Whether it's a cake that looks like a flag, or patriotic strawberries, the Fourth of July is a great time to bust open the oven, and beat some eggs. Baking is great, since you can do it with a group, or by yourself. Your desserts will likely be the hit of the barbecue.

6. Have a Fourth of July movie marathon

Surprisingly, there's not a wide selection of Fourth of July films. But, there are a few — Red Dawn, Independence Day, The Patriot, and even Jaws, to name a couple. While they're not currently streaming on Netflix, they're in pretty wide circulation, so there's a fantastic chance that your friends have a few DVDs lying around. If you want to hit the theater, Independence Day: Resurgence was just released, and will likely be a fun time.

Making a layered drink will make you feel like the ultimate bartender. The one above, created by Brown Eyed Baker, is actually non-alcoholic, so everyone can celebrate with one. In fact, it includes items that you might already have, or can easily pick up at the store — cranberry juice, blue Powerade, and 7-Up. If you'd like to add a little booze to the mix, My Baking Addiction has a great recipe for a festive-looking Fourth of July sangria.

If you have no problem with cleaning up confetti (or have a really, really good vacuum), this craft can be the perfect way to add a little entertainment to your holiday. Besides confetti and balloons, you'll also need a funnel and an air pump to make these work. You can even use glow in the dark balloons for some extra pizzazz.

More like this
20 Christmas Movie Quotes That'll Get You In The Holiday Spirit
By Alexis Morillo
The 77 Cheapest, Most Clever Gifts On Amazon
By Rebecca Martinson
These 7 TikTok Food Trends Defined 2022
By Alexis Morillo
Here’s How To Make The TikTok-Viral Sushi Bake
By Alexis Morillo
Get Even More From Bustle — Sign Up For The Newsletter