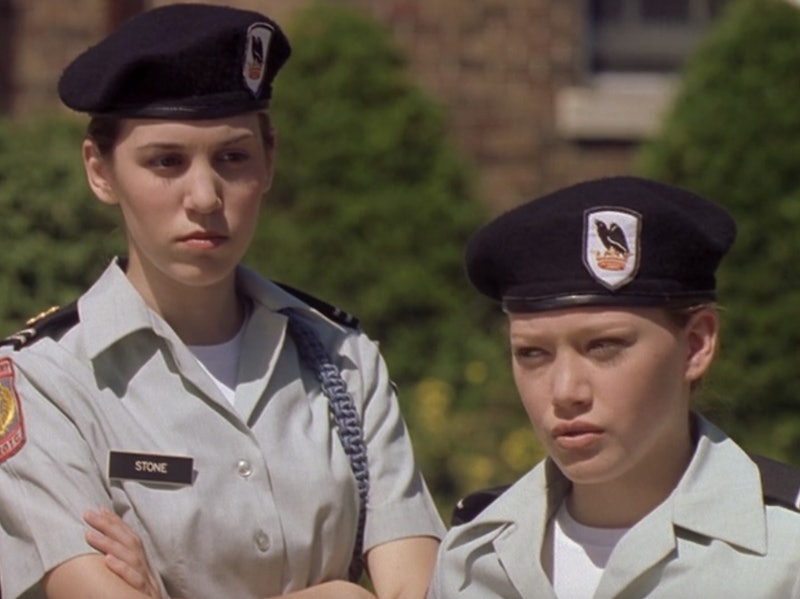 I've watched and re-watched a lot of vintage Disney Channel original movies during my tenure as a writer, and I have to say — few captivate me as much as Cadet Kelly. Maybe it’s because I have a soft spot for old Hilary Duff films, or maybe it’s because the movie is legitimately fascinating. Either way, I find it insanely rewatchable. In rewatching, I've also come to find that there’s a lot of things in Cadet Kelly you probably never noticed when you first watched the movie as a tween. Like, little things — maybe a joke here and there or something. They're things you absolutely notice when you rewatch as an adult, and things that absolutely deserve to be highlighted in a post like this.

A lot of it is logistic stuff, and a lot of it may be my own bias. Truth be told, I’m a free spirit art kid who would’ve thrown a literal tantrum if my mom told me my new stepdad was putting me into military school. I’d also throw a literal tantrum about my mom divorcing my dad kind of out of nowhere. But anyway, beyond that film’s very premise, there are a lot of other things that have me scratching my head.

What is that background even supposed to be, and is that light sepia filter?

2. Everyone Stays Far Away From The Goldfish Bowl As It Looks Like It's About To Crash

Kelly literally takes a gigantic step back and they all make wizard hands.

Why do they think that's going to help, are they magic?

3. Kelly Spins About A Half Dozen Times During This Exchange With Her Mother

It may be to highlight her background in dance, but eh, hard to say.

4. Nothing About Kelly Going To Military School Makes Any Sense

OK, Shouldn't there at least be a discussion about Kelly's enrollment in military school, especially if she went to such an unstructured arts school prior to moving? If she had been going to public school, I could maybe see the transition being a little more fluid, but she attended something that specifically zoned in on her creative ambitions. So this does seem like a callous thing to do, and not even in a "But mo-om that's not fair," kind of way.

She says that families live together, but they're not living together — at least not five days out of the week.

6. Military School Students Have A Penchant For Sock Buns

I mean, no, probably not, this movie came out in 2002, which feels decidedly pre-sock bun. Everyone's hair looks so perfect, though, so... maybe they were pro-Hairagami?

7. Kelly Says That Her Old School Only Had Students Doing Math When They Felt Like It And That Seems Like It Wouldn't Be... Allowed

New York standards seem to insist on at least three math units, so it feels unlikely that she would just be able to forgo it... but technically that's for high school (and Kelly might be in eighth grade, technically, by the time she enrolls in military school). Also, maybe performing art schools are different? Who knows.

8. It's Unclear When And Where These Girls Are Getting Formalwear

It's not necessarily impossible — as far as I can tell, they have the weekend off to do whatever. My questions are more like, where is this school? Is there a neighboring town? Is anyone allowed to have a car on campus that would take them to a mall? It's just weird that they all start finding these gowns out of thin air.

9. Kelly Doesn't Even Wear Regulation Pajamas For The First Half Of Her Stay

She doesn't get in huge trouble for it or anything, and mid-movie she changes into the PJs she should have been wearing at military school from the start, but I'm just kind of amused that she was able to get away with these bright red jammies for so long.

10. The Color Palette Of Kelly's Paint Set Doesn't Match Up With Jenny's Hair

OK, look, this one might be a little nitpicky, because I think she could've probably mixed that shade of chartreuse. Take a second look at the set, though: It looks like a ton of primary colors and secondary shades. I'm not saying she couldn't have mixed up that pink either, it just looks a little too neon to get naturally, and that's something I would've maybe brought up during the trial.

11. Also, How Does She Have A Completely Different Hair Style When She Shows It To The Court

Her hair could've naturally kinked up in some way, I guess, it just looks so drastically different than the above image. SUSPICIOUS.

Listen, though, I'm sure the list doesn't stop there. Feel free to catch Cadet Kelly on Netflix and ponder what else you missed in this classic Disney Channel original.