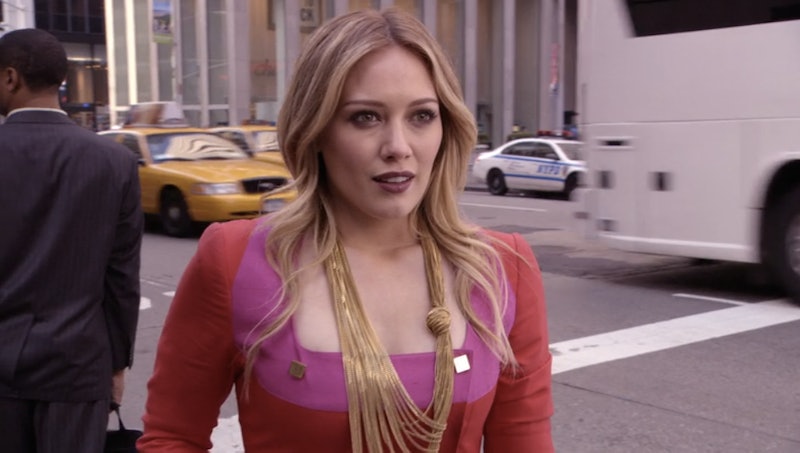 At what was undoubtedly not the high point of Hilary Duff's career, there lies Beauty & the Briefcase , a movie offensive to me both as a film lover and a journalist. Yet somehow I always watch it when I'm sick, even last night while recovering from a stomach virus. With a strong onset of nausea, you'd wonder why I'd put myself through such a thing. Well, it's for the same reason I do any bad movie rewatch: because it's a movie that's so impressively, almost endearingly bad that it's worth celebrating.

The story is pretty basic: Lane Daniels (Duff) is a freelance journalist with a penchant for tacky hoop earrings and a list of qualities she desires in a "magic man," her dream guy. Somehow she gets an assignment Cosmopolitan, which has her go undercover into the business world to find a boyfriend. That's it. That's literally it.

It's... weird, especially Cosmopolitan's role. Cosmopolitan has always been the Samantha Jones of lady mags. Cosmo Digital, which I enjoy, is like Millennial Samantha Jones with a sarcastic sense of humor, excellent meme game and strong feminist politics. Both, for what it's worth, are progressive in its own way.

My point is, I don't really know how Lane got this job since she has the outmoded romantic ideals of a Disney Princess, and the writing prowess of your deluded "fashion blogger" 12-year-old sister. She's really more of a Charlotte who desperately wants to be a Carrie, generously put.

Anyway. It's still kind of a fun (if not infuriating) film, and I've captured (in chronological order) the 30 most incredulous things about it. Enjoy!

1. Lane is able to casually stand in the middle of Times Square without 40 people bumping into her and grumbling "MOVE IT, BITCH."

Already this film is deeply unrealistic.

2. She's also been able to survive in New York on a few posts for fashion blogs and one freelance article in a magazine.

3. This flawless human being gets pigeonholed in the best friend role.

Joanne is Lane's bestie, an accomplished fashion photographer, and has adorably low standards for men (he must be breathing, and he must be cute). Of course, Lane ends up just using her as a soundboard for her problems and freeloading off her the entire movie.

4. This shrine to Cosmopolitan.

Lane doesn't have time to find a full time job or pay rent, but she DOES have time to make this proto-Pinterest creation.

It is a stunning building that I spent many magical days at while I was still interning. It deserves better than this.

6. This is... maybe not the Cosmopolitan office?

Frankly I've never been to their floor, but all the offices that I remember were filled with more laptops than models.

7. Lane's pitches for her dream magazine.

"How 'bout wearing boyfriend jeans when you don't have a boyfriend?"

Lane thinks, while stealthily wearing her idea of "business casual."

9. When hilarious Joanne says Lane's list is from "every romantic comedy Lane's ever watched."

Nothing's sexier than being given a nickname based on an outdated TV show.

It's not even good styling, literally none of those colors are going together in a cohesive way.

12. Then she manages to get eight dates in one week.

I won't shame her for this, it's not my style, but seriously? How is she able to get eight dates within her first week on the job? Do you know how difficult it is to find a date in New York? THIS IS LIZZIE MCGUIRE, YOU GUYS.

13. AND THEN SHE PRINTS OUT HER ESCAPADES AT THE OFFICE.

WHAT ARE YOU DOING, WHO EVEN PRINTS OUT THEIR ARTICLES ANYMORE?

14. Where are these two finding the money to be amateur alcoholics?

Like every other scene they're downing drinks at some fancy bar, those pomegranate martinis are probably like 14 dollars a pop.

15. JK, fabulous Joanne gets men to buy her drinks.

Even the ones who aren't hitting on her. And when Lane throws her under the bus with the introduction, "This is my friend... who has a boyfriend," Joanne gracefully handles it with, "It's been in my family for generations, but friends call me Joanne."

17. This criminally hot guy isn't good enough for her.

UM, I'll take him off your hands.

18. These are the texts blonde guy sends when she's on a date with dark-haired hottie.

19. Lane nearly quits her job, her source of income and the basis of her career-making story, with Stacey McGill penmanship.

Oh my god, this girl is unqualified for everything.

20. Their apartment doubles as a studio?

I don't mean it's a studio apartment, which would make sense because they're post-graduate freelancers working in creative fields. I mean, I think it's literally Joanne's studio, since she seems to be taking all her pictures in the apartment. Weird.

21. This distracting bodycon skirt Lane wears to the office, not once, but twice.

22. Joanne can't go to the grocery store, because she "had that thing with the cashier."

You are the only character I relate to.

If Lane took even an entry level Journalism class she would've seen that one Stephen Glass film enough times to know this is a BAD IDEA.

24. Then she LITERALLY WRITES DOWN HER INNER MONOLOGUE WORD-FOR-WORD.

Oh my god, if you're going to neglect the ethics of journalism could you at least not ADMIT IT IN YOUR ARTICLE?

25. "Okay, I probably shouldn't tell you this, but ever since college I've had this thing, it's a list for eligible guys. It's basically a checklist to find my magic man."

Seriously, you should tell NOBODY about that. That's one of those things you take to the grave.

26. "Yeah, nothing like deceiving Cosmo to work up an appetite."

Joanne's credibility is on the line here, so whatever, Lane, weave a web of lies.

27. Lane goes suit shopping with her boss, because that happens.

28. "The truth is that everyone has issues and maybe building up a fake perfect man in my mind is my biggest issue of all."

Oh sweetie, no, that doesn't even make the top 10 list of your biggest issues.

Nope. Nope to all of this.

30. And they lived happily ever after, walking out of the middle of a board meeting.

More like this
Revisit 1992’s 'A League Of Their Own Cast' Photos After The New TV Series
By Grace Wehniainen
At 28, Lesley Manville Was Acting, Picketing, & Singing Kate Bush Songs
By Olivia-Anne Cleary
A Full Debrief Of Who Follows Who From Love Island – & Who Doesn’t
By Shahed Ezaydi
Ekin-Su & Davide’s Next Move Is Confirmed & Involves *A Lot* Of Travel
By El Hunt
Get Even More From Bustle — Sign Up For The Newsletter