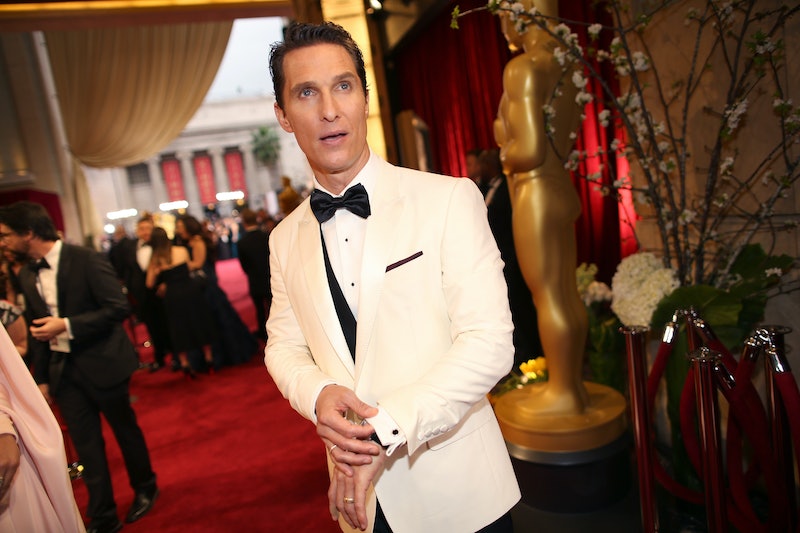 If there's one thing to be said about the 2014 Oscars, it's that competition was stiff all around, and the Best Actor in a Leading Role category was certainly one of the stiffest. But the Academy had to choose someone, and drum roll — Matthew McConaughey is this year's Best Actor in a Leading Role. Though McConaughey gave arguably the greatest performance of his career thus far in Dallas Buyers Club, his fellow nominees gave him a run for his money. Leading up to awards night, Chiwetel Ejiofor in 12 Years A Slave and Bruce Dern in Nebraska were the biggest contenders to bring the upset, with Leonardo DiCaprio in The Wolf of Wall Street and Christian Bale in American Hustle rounding out the talent-crowded category.

This year's Best Actor race pulled together an interesting bunch. Many argued that Ejiofor more than deserve to take home the statue for his incredible portrayal of a free black man who is captured and sold into slavery. There was also a strong possibility that Bruce Dern would upset the entire category by receiving the honor for his role in the indie road movie about a father who believes he's struck it rich.

DiCaprio's sex, drugs, and more drugs recreation of Wall Street heavy-weight Jordan Belfort had fans wondering whether he'd finally wear the Academy down and take home Oscar after his surprising Golden Globes win, and last but not least, Christian Bale's portrayal of con-man and epic-combover-haver Irving Rosenfeld,was the long shot for a win, even though he gave a worthy performance. Ultimately, it was McConaughey who impressed the Academy the most.

The Dallas Buyers Club Actor was in great and challenging company, but his portrayal of AIDs activist Ron Woodroof alongside fellow nominee Jared Leto was a step above the rest, And we all knew it. It looks like Liza Minnelli won't have to hand over her Oscar after all, let the Age of McConaughey begin. Alright, Alright, Alright.