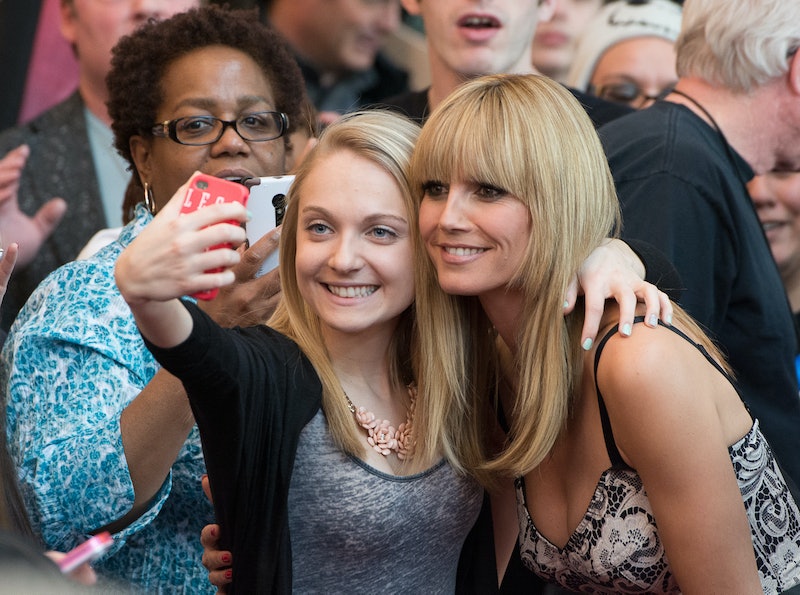 A quick scroll through your Instagram feed will probably yield at least 10 “selfies.” If you don’t know what a selfie is, crawl back under your rock and continue on — you’re better off without this knowledge. A new study shows that most of us are pretty damn aware of what selfies are, and we’re really into taking them.

The study, conducted by Selfiecity, analyzed selfies from six cities across the globe, including New York, Sao Paolo, and Moscow. After combing through all those duck-faces, Selfiecity came up with some pretty interesting conclusions. The first, of course, being that women take a lot more selfies than men, up until they turn 40.

After 40, men are much more likely to post selfies to Instagram that women, and something tells me that has a lot to do with the fact that society largely regards “women of a certain age” as somehow less beautiful than their younger counterparts.

As men age, they get the distinction of looking “distinguished,” while women head into “old crone” territory. Sure, everyone talks about how beautiful Meryl Streep is, but they don’t use the word “sexy” in the same way that they would for George Clooney or Richard Gere.

CNN’s Kelly Wallace asked her Facebook fans why they thought that women slowed down the selfies after reaching 40. "Women over 40 are probably more insecure about how they look than men are," said Jenny Dean Schmidt, host of "The Channelmom Show" in Denver, on Facebook. "I'm over 40, so I know. I'd probably be snapping away if I was 22."

Another commenter, though, offered a different perspective — maybe women over 40 don’t see a need to validate themselves by posting selfies. While I don’t necessarily agree that people only take selfies for compliments and validation, there is definitely be some truth in the idea that as women age, they begin to give fewer and fewer fucks about what people around them think about their lives, and most importantly, their bodies.

Whatever the reasoning, it looks like your mom probably isn’t going to be getting an Instagram account and posting duckface selfies. But maybe you should encourage her to. The world needs more women who are confident enough in their own beauty to take a picture of them loving what they look like, haters be damned.

More like this
How To Politely Reject Someone Who Keeps Asking You Out
By Laken Howard and Lexi Inks
8 Completely Unserious Tips To Make Your Cuffing Season A Success
By Ginny Hogan
10 Ways To Be More Empathetic To Your Partner
By Raven Ishak and Lexi Inks
Think Your Partner Is Cheating? These Tarot Cards May Confirm Your Suspicions
By Kristine Fellizar
Get Even More From Bustle — Sign Up For The Newsletter