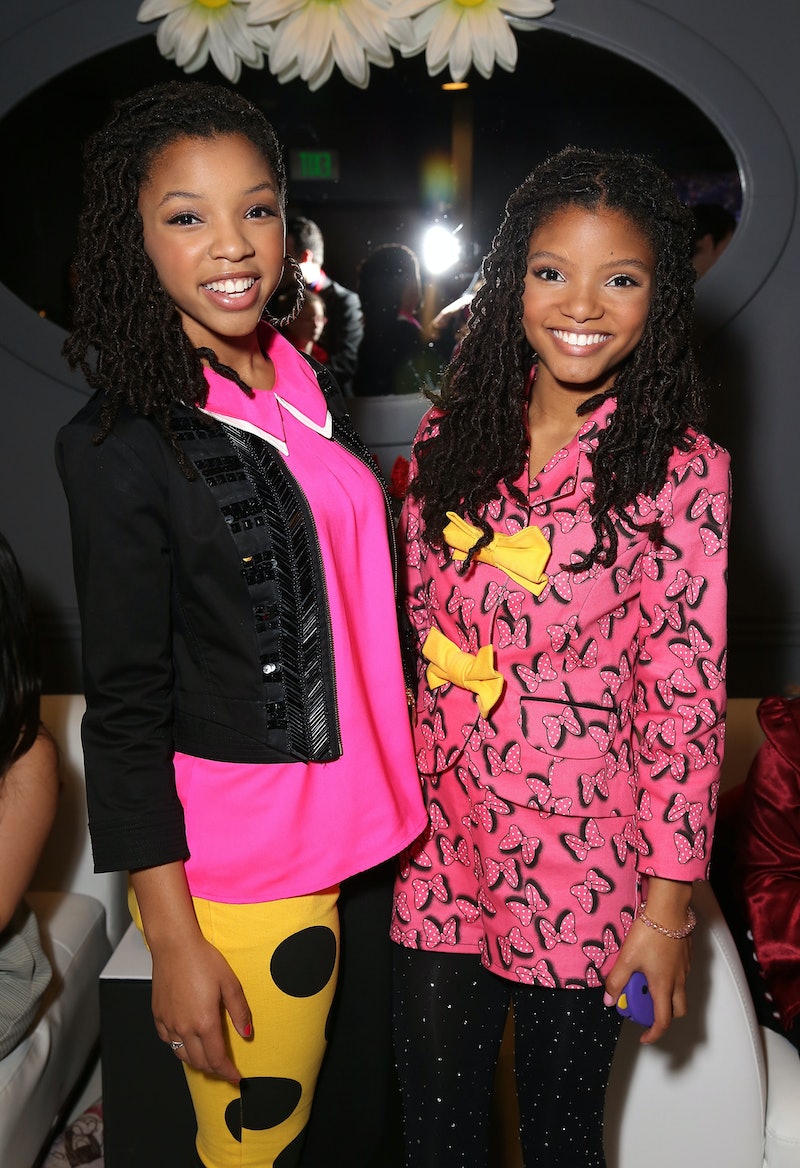 Beyoncé is helping to foster a new generation of young, talented performers, and in her Lemonade movie, two teenagers are featured who have been taken under Queen Bey's glorious wing: Chloe and Halle Bailey, sisters who perform as Chloe x Halle. But how did these girls, who are 17 and 16 years ago, respectively, find themselves being mentored by Bey and getting in formation with her and her squad of powerful black women in Lemonade? True to a 21st century Cinderella story, Chloe x Halle were found on YouTube, and now they're signed to Beyoncé's record label Parkwood Entertainment. Oh, and Michelle Obama is one of their biggest fans. OK, ladies!

The sisters just released their first EP, Sugar Symphony, as part of their reported six-album, $1 million deal with Parkwood, according to ABC News. That could buy a lot of lemonade. Two years ago, Chloe and Halle, who hail from Atlanta, posted a video of themselves singing a cover of Beyoncé's "Pretty Hurts" with just a piano accompanying them. The musical duo had been posting covers on their YouTube channel since they were just 12 and 11 years old; their first ever video was a cover of Beyoncé's own "Best Thing I Never Had."

But it was "Pretty Hurts" that caught Beyoncé's attention, after getting more than 11 million views. The singer had her record label Parkwood reach out to the girls. "We were screaming," Chloe told ABC, which is really the only appropriate response.

In a cover story with The Cut, Chloe and Halle's dad Doug Bailey said that Beyoncé is extremely hands on with them, and whenever she's in Los Angeles (where the Bailey family now lives), Bey invites them backstage to her shows. "Basically, she just said that she was going to do whatever she could to help support the girls and she thought they were great talents," their father said.

Not only did they just release their first EP of original songs in May, but in the past year alone, they have performed twice for first lady Michelle Obama, once at the White House Easter Egg Roll and at the FLOTUS' panel at South by Southwest to promote Let Girls Learn, which advocates for global equality of education. They were the openers at the keynote and sang on the first lady's single "This Is For My Girls" that was produced especially for the initiative, which also featured Missy Elliot and Zendaya.

According to their story with The Cut, the girls have more than 150 songs written that they have sent to Bey, who emails them personally with feedback. That's right, they are on Beyoncé's email list. So what advice does Bey give her proteges? Talking to Women's Wear Daily, Halle said, "Beyoncé has always told us to just continue being us, authentically us. A big staple in what we do is that we like to be natural — natural hair, natural makeup. It all comes from within. We want our light to shine."

And shine it definitely does, whether as part of the force of strong women in "Lemonade," performing at the White House, or in their music videos. They just released a video for their single "Drop" in April, and it wouldn't have been out of place on Lemonade.

They are harnessing their passion and helping spread their love: "The message that we want to put out in our music,” Chloe told The Cut, “is of course we want you to feel great, but just be yourself, don’t feel like you have to put yourself in a box because of what anyone else is doing. I just recently learned that, to be confident in your ideas and who you are." And it doesn't hurt if you've got Beyoncé to go to for support.

More like this
Beyoncé’s Special Tribute To Sister Solange Was Both Touching & Hilarious
By Stephanie Topacio Long
At 28, Melanie C Was Falling In Love & Reclaiming Her Confidence
By Olivia-Anne Cleary
Kesha Is Down To Be The Next Bachelorette
By Jake Viswanath
Everything To Know About Taylor Swift’s 10th Studio Album, 'Midnights'
By Grace Wehniainen and Jake Viswanath
Get Even More From Bustle — Sign Up For The Newsletter