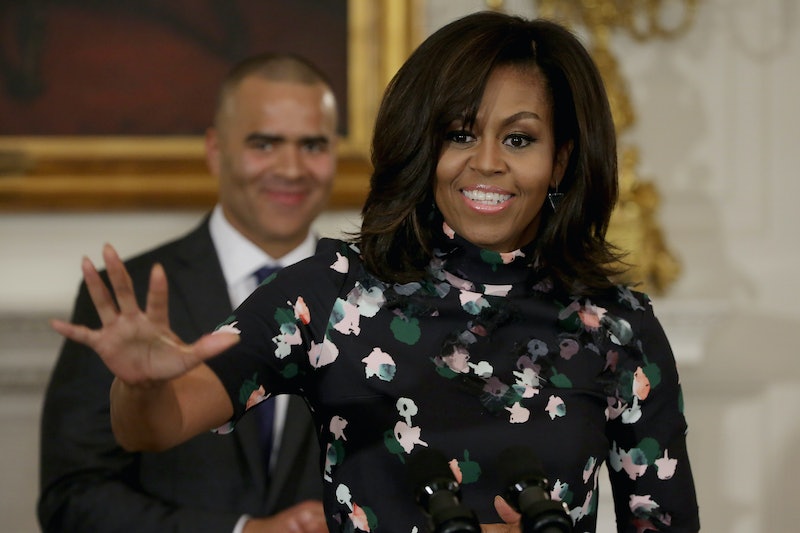 First Lady Michelle Obama has made it no secret that promoting education for girls around the globe is a subject that she is wholly passionate about and dedicated to. In September of 2015, Obama appeared at Glamour 's The Power of an Educated Girl panel at the Apollo Theater, which came only a few months after the First Lady and her husband, President Obama, first launched the Let Girls Learn Initiative in March. Now, to celebrate the inspiring message of Let Girls Learn, Obama has enlisted an impressive roster of pop stars for a song the proceeds from which will benefit the initiative.

Written by Grammy Award-winning and legendary songwriter Diane Warren, "This Is For My Girls" features vocals from a diverse group of women from a wide range of genres and fan bases, which I believe is key to expand the potential scope this song and its message can reach. Well-established singers like Kelly Clarkson, Missy Elliott, Kelly Rowland, Janelle Monae, Lea Michele, and Zendaya are sharing the duties with rising newcomers, Jadagrace and Beyoncé proteges, Chloe & Halle.

Warren spoke to Billboard about the song, saying,

It's kind of like "We Are the World" meets "Lady Marmalade" with these strong voices and strong women... When was the last time you heard a song like this or a record that had this many amazing divas on it? I'm really proud.

Sounds exciting! But the song premiere and support from these incredible artists is only the tip of the iceberg when it comes to the possibilities that Let Girls Learn and the #62MillionGirls social media campaign can accomplish. In anticipation of Obama's keynote at SXSW and the first live performance of "This Is For my Girls," Obama wrote a piece titled "Why Global Girls' Education Is So Personal for Me," in the March 16 issue of Lenny Letter. She shared,

Think about who — and what — you would be today if your formal education had ended after middle school and you knew only what you'd learned through eighth grade... It's inconceivable, right? We wouldn't dream of accepting this fate for ourselves — or for our friends, sisters, or daughters. So why would we accept it for any girl on this planet?

After reading more about this cause, I am certainly very compelled to volunteer and spread more awareness on the importance of education for the 62 million girls that do not have access to it. And I believe this song and the diverse group of artists behind it will inspire others to do the same.

The choice of singers on the song is deliberate and it features women in the industry who have been role models and vocal in their support of women's issues. Warren told Billboard,

I'm working on Zendaya's record, and she's such a great role model for young girls. These are all these people I'm working with — I'm working with Janelle Monae and Kelly Rowland. Aside from being great singers, they're all strong women. Like Kelly Clarkson, she doesn't take sh*t from anybody, you know? None of these girls do.

The message of "This Is For My Girls" is only the first step in the call to action that Obama will be launching, to make sure that people can be involved and do something about this issue. With the support of these wonderful and diverse artists, Let Girls Learn has the possibility to reach more people than ever.

Obama ends her Lenny Letter piece, "Against the most heartbreaking odds, these girls never lose hope in themselves. The least we can do is give them a chance to go to school, fulfill that hope, and become who and what they are meant to be."