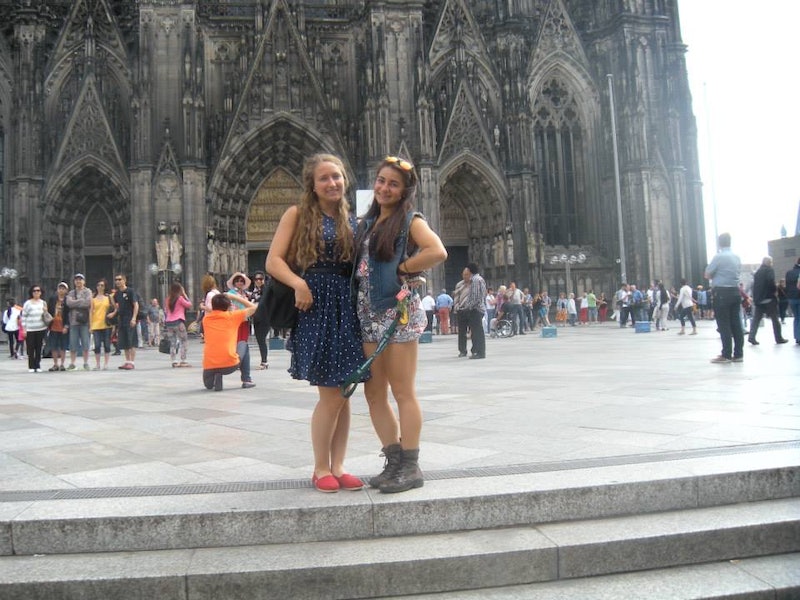 “Aren’t you scared to walk around in America? Aren’t you afraid of being shot?” My friends and I all studied abroad during college, and this was something we got asked regularly by our European friends and hosts. My host mom in Spain could never get enough of telling me how scary America was. “Where are you from, hija, New Jersey?” she would ask me in Spanish. “That’s too close to New York. I would never go there.”

The recent movie theater shooting in Germany made me question how safe Europe is when compared to the United States. Although nothing bad or dangerous happened to me while abroad (except losing my passport and almost missing my flight home), seeing unrest in countries I've previously visited makes me think: "What if that happened while I was there?"

In addition to studying abroad in Spain, I also had the opportunity to visit Germany, Belgium, and the Netherlands as a student, as part of a goodwill trip undertaken by my field hockey team. We played club teams from other countries and went on cultural sightseeing excursions.

This whirlwind European tour brought my team closer together, probably because so many things went wrong. Our bus driver got lost on the way from Amsterdam and couldn’t communicate with us in English, so we rolled into our hotel in Dusseldorf at two in the morning. Our tour guide and “concierge” forgot to feed us on the way to our sightseeing tour, so he begrudgingly popped into a market to buy us “American foods,” like white bread and bologna. Because field hockey is such a dominant sport in Europe, we got our collective asses handed to us by every club we played. I still have a scar on my left knee from getting laid out on the turf by a German girl who was twice my size.

Despite the difficult trials of our trip, we loved competing with talented players from other countries. Although they defeated us mercilessly, we exchanged small gifts with every team we played, and were also almost always invited for post-match dinners at the club house.

There is something so romantic and nostalgic about Europe that sets it apart from America. When you're surrounded by ivy-covered buildings and charming Old World architecture, it feels like you are stepping into a less-scary past. It's easy to forget about the terrorism, shootings, and gun violence when you're sitting in a biergaarten with your friends. But that doesn't mean that it doesn't exist.

By my count, I‘ve traveled to three European countries in the past that have experienced large-scale violence recently. My heart broke during the terrorist attacks in Brussels in March, because it made me think of walking the streets of nearby Bruges with my teammates. After having interacted with so many people from different countries, I wonder if anybody I’ve met has been affected. What if the girls from the German hockey club had family in Viernheim, the city that experienced the shooting this week? Did anyone I met have friends or family who were killed in the Paris attacks?

Although the United States has a particularly alarming reputation for gun violence, mass shootings do occur throughout the world. And although the Office of Global Education at my school took measures to identify at-risk regions and areas that were totally banned for international study, it is impossible to predict where a terrorist attack or mass shooting will occur, especially if it takes place in a relatively calm country that wasn’t previously in the midst of turmoil.

“Thank God you went to Europe when you did,” my dad said to me after watching breaking news coverage of the Germany shooting. “Could you imagine being over there now? Your mother would have a fit.” When I first saw the news of the movie theater attack while scrolling through my news feed, I couldn't believe it. Hearing about the armed gunman taking hostages at a small German cinema evoked memories of the 2012 shooting at a theater in Aurora, Colorado. I wondered, Has the whole world lost its mind?

When I was younger, I used to think traveling was the greatest thing ever, but lately, I’ve lost my love for it. I doubt that the fear of terrorism or violence will ever deter me from visiting Europe again, but I noticed that I’m hyper-aware whenever I’m at a transit authority, like some type of hand-wringing grandmother. When I recently picked my boyfriend up from the airport, the routine presence of Newark police even made me nervous. When I take the subway to visit my friend in Brooklyn, I eye everyone with suspicion. When we fly, which is not often, my mother grips the seats and mutters prayers under her breath before take-off. Traveling and exploring should be fun, but there is always the looming fear that I picked the wrong day to visit a particular city. Growing up in a world where gun violence is the new normal will do that to do.

More like this
Your Daily Horoscope For August 16, 2022
By Alexandria Lettman
The “Teenage Dirtbag” Trend Is TikTok's Latest Nostalgic Obsession
By Meguire Hennes
The Best Careers For Virgo Zodiac Signs
By Brittany Beringer
12 Cheeky Instagram Captions To Use When You Haven’t Posted In Weeks
By Emma Carey
Get Even More From Bustle — Sign Up For The Newsletter