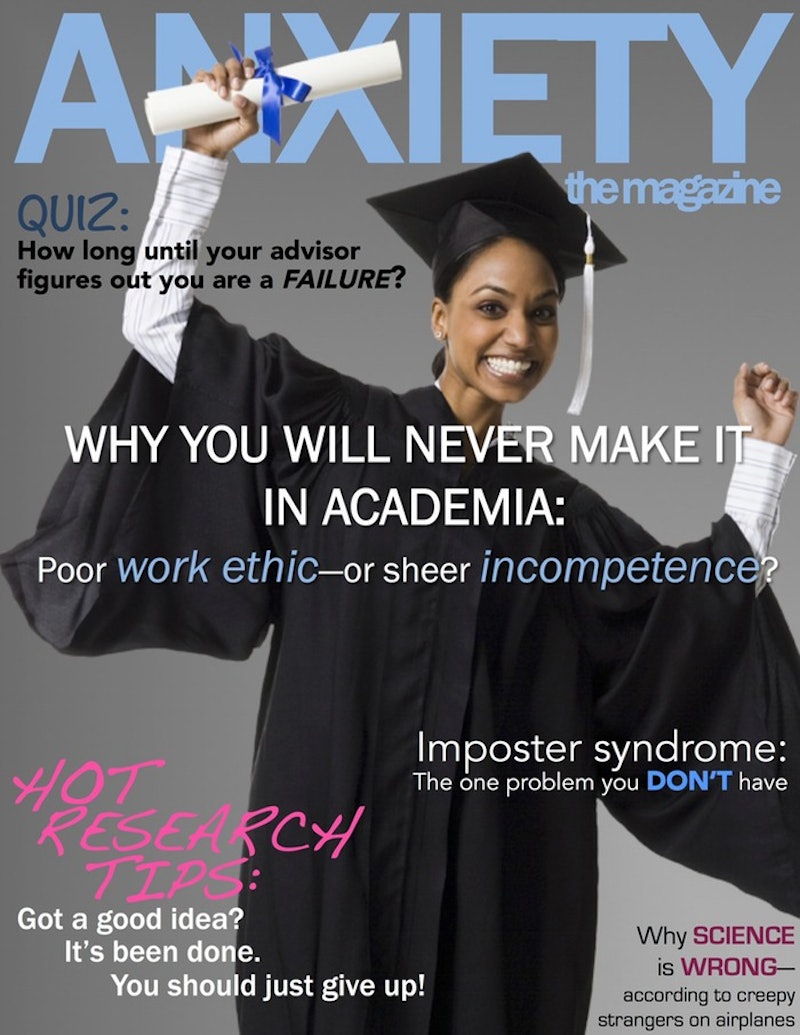 For the estimated 50 million American adults who suffer from anxiety disorders, living with this particularly prevalent mental health issue is generally no laughing matter. Sometimes, though, a little levity can be a huge help in coping with serious subjects — which is where the art project Anxiety: The Magazine comes in. In a series of faux magazine covers with comical yet perfectly on point headlines, the project, created by Twitter user @crayonelyse, explores life with anxiety in a way that's both deeply poignant and deeply hilarious. It effectively uses humor to further the narrative about living with anxiety disorders.

According to Crayon, a mid-20s grad student who prefers to go by this pen name, the project came about pretty organically. Her main source of inspiration is her life: friends, current events, her job. "I'm in a Ph.D. program, which is an amazing opportunity to worry harder than you ever thought you could. It can also push you to find new ways to procrastinate, both of which has been instrumental to my creative process," she tells Bustle via email. She adds, "To be fair, my creative process is mostly just writing down actual thoughts that have happened in my brain, and then leveraging my Powerpoint prowess to make it look official."

Crayon readily admits that she naturally defaults to satire and humor when dealing with mental health issues ("I mean, if these weren't funny, it would just be sad lists. OK, wait, actually 'Sad Lists' is a hilarious idea. Maybe I'll do that next," she says), but she also realizes that not everyone who suffers from anxiety will feel the same. It's a hard line to walk, she says, but doing so has helped her look at her thoughts from the outside.

"It reminds me that these thoughts aren't reality or, at least, they don't have to be," she explains. "Laughing helps. It keeps me breathing, thinking. It helps me be me." Humor grounds her, making it an invaluable tool against the daily deluge of worries that flood her mind daily.

And for those who don't feel the same way, Crayon in no way discounts their feelings. "I recognize that for some, this approach can seem misguided. Some readers have felt this isn't truly a representation of anxiety, that anxiety isn't funny, or shouldn't be talked about this way — which I get, and I'm really sorry to anyone who feels hurt or misrepresented by my work. I hear you," she says.

But why she opts for humor in these instances likely isn't the most pressing question Crayon has gotten about the project. That distinction goes to, "Do you suffer from anxiety?" And in her response, Crayon makes a very important point about this mental health condition: that it is more common than you think, and that it might look differently for someone else than it does for you.

"Asking whether I have anxiety is like asking someone who has been standing in the ocean her whole life whether she is drowning. Some of the time, I'm really not drowning. Some days I can feel the waves pushing at me, but I get out of the way so they don't push me down. Sometimes I can look down and see it, think about it, feel it, but it doesn't control me. I am grateful for these days," she shares. "Then there are days when the water is over my head and I'm just struggling to breathe. These are not the days that I'm making the Anxiety magazine — or really doing anything at all. I recognize that for some people, anxiety is more like this all the time. I recognize how lucky I am for the days that I spend in the shallow water, and I don't want to make light of the serious depths this experience can reach."

And it remains important to raise awareness about a group of disorders that, despite being common, is still often stigmatized. Fortunately, Crayon intends to keep making more covers for a while, seeing how well the faux magazine format has worked for her purpose. As she puts it, "Part of comedy is that disconnect between expectations and outcomes. The dissonance between the upbeat and eye-catching magazine aesthetic and the uncomfortable content definitely lends itself to the joke."

As for the part of the punchline that resonates most with her so far, she says it's all about... water consumption. "I think my favorite headline so far might be, 'Seriously, why aren't you drinking more water?' Oy, either that or the one about moisturizing. Basically, I'm very concerned about hydration — I just know I'm getting it wrong."