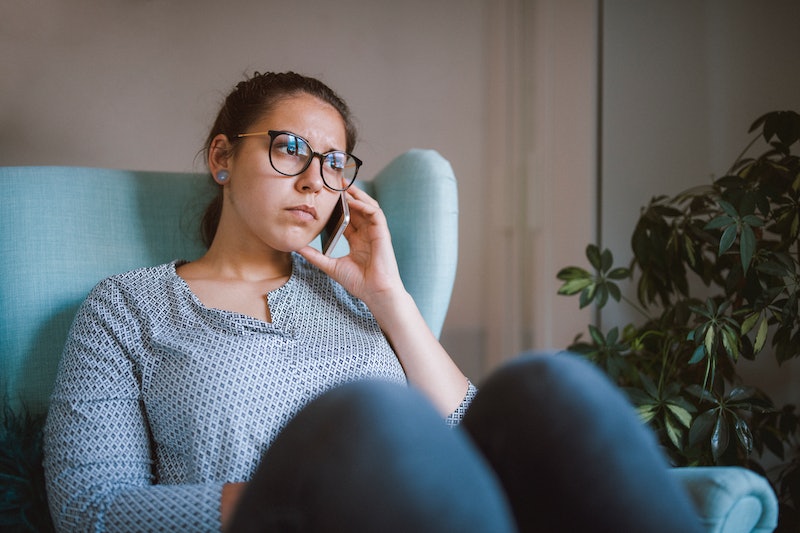 Have you ever wondered what the signs you're neurotic look like in real life? Even if you slept your way through psychology class in high school, you're probably aware of the five factor model (FFM) of personality — or rather, you probably know the traits themselves, which are often referred to as the "Big Five." The FFM works on the assumption that all personalities possess the same basic dimensions: extroversion, agreeableness, conscientiousness, openness to experience, and neuroticism. According to the theory, everyone's personality is unique because they combine these psychological "building blocks," so to speak, in different ways. So whenever you hear someone described as "neurotic"? Although it may just be a figure of speech, it may not be; in fact, that person might be displaying the kinds of behaviors consistent with people who score highly on the Big Five trait of neuroticism.

The traits themselves are fairly self-explanatory. To simplify things greatly, extroversion refers to someone's sociability; agreeableness to their compassion; conscientiousness to impulse control and work ethic; openness to an appreciation for adventure and creativity; and finally, neuroticism to moodiness. The theory isn't perfect, of course, but it does a fairly good job of quantifying something that isn't easily quantified. Much of this comes from the dimensional approach; instead of classifying people into categories, the Big Five theory describes personalities based on where someone falls on a spectrum. For instance, you might score high in extroversion but low in agreeableness, which means you're outgoing but not especially trusting or cooperative.

That being said, there's a world of difference between seeing personalities described on paper and how they manifest in real life, which brings up today's question: How are you supposed to know where you fall on each dimension? Believe it or not, being aware of your personality isn't just navel-gazing; research consistently shows that different personality traits can predict everyday behaviors, as well as the likelihood of certain psychological disorders. Perhaps more importantly, they can even predict your Hogwarts House, and if that's not necessary information, I don't know what is.

And so, without further ado, let's look at a personality trait near and dear to my heart: neuroticism, or the tendency to respond poorly to stressful events. Here are five signs you can count yourself among the ranks of the anxiety-ridden and moody. (Yay?)

1. You're A Little Volatile

Neuroticism doesn't have the best reputation, and as a result, when discussing the Big Five, psychologists sometimes refer to its reverse instead: Emotional stability. The phrasing is pretty telling, isn't it? Research has shown that people who are highly neurotic tend to respond to stress with irritability, anxiety, or other negative emotional responses. "The bases of neuroticism are levels of anxiety and volatility," wrote psychologist Nathan C. Popkins in a 1998 paper. In short, highly neurotic people are heavy on the mood swings.

According to Psychology Today, neuroticism is characterized by "high emotional reactivity." In other words, people who are more neurotic are more likely to respond emotionally to little things, while someone who's more emotionally stable is likely to remain calm.

Considering that neurotic people are easily stressed and likely to freak out over small problems, it's probably no surprise to hear that they also tend to be worriers. This doesn't necessarily mean you have anxiety, but...

4. You Have Anxiety Or Depression

A number of studies have shown that people who are more neurotic are more likely to have certain psychological disorders — namely, substance abuse, clinical anxiety, and depression. While being neurotic doesn't mean you're doomed to develop a disorder, there is a well-established connection.

Before you start freaking out about being neurotic, though (which is a pretty neurotic thing to do), know, too, that it's not necessarily a bad thing; there are benefits, too. Indeed, research has shown that it's possible to use your anxiety to get stuff done. As is the case with so many other things, neuroticism isn't best described as inherently "good" or "bad." It's just a part of your personality — part of what makes you who you are. And you're pretty awesome, so embrace your unique, badass self.