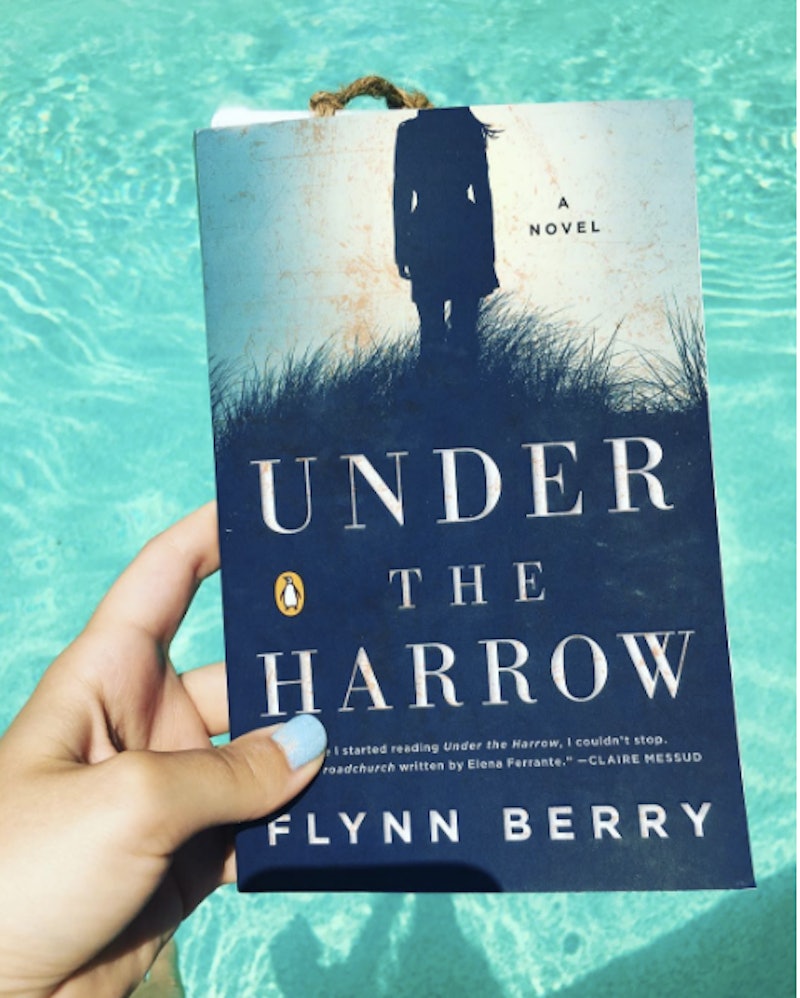 It seems every season has a book that everyone is fast to call "The Next Gone Girl." Which means, in a nutshell, the book is a thriller, with a woman at the helm. These comparisons are still coming in fast and furiously, and more and more books are also being compared to The Girl on the Train. It's not that these books aren't as good as Gillian Flynn or Paula Hawkins' books; they are.

But, immediately comparing a brand new book to something else is unfair to the book and author, and to readers. It gives the readers false expectations, and it assumes that the author's novel can't stand on its own, without a huge comparison. When I saw Flynn Berry's Under the Harrow getting praise as being an unputdownable thriller, I knew it was the perfect summer read for me. But of course, the back proclaimed it "A nail-biter...Fans of Gone Girl and The Girl on the Train will no doubt love this dark, chilling book." Cue the eye roll.

Under the Harrow is absolutely engrossing, and yes, dark and chilling. It's the story of two sisters, and what happens when you're the one left behind after a grisly murder. But it's also one of the most uniquely told thrillers I've read in forever — and I read a lot of them. Here are 10 quotes from Flynn Berry's debut that will draw you in, and show you that it's the thriller of the summer. Without all the comparisons.

1. "I wait for Rachel to appear in the doorway. Her face confused and exhausted, her eyes fixing on mine. I am listening for the soft pad of her footsteps when I hear the sirens. She has to come down before the ambulance arrives. It will be finished when someone else sees her. I beg her to come down."

2. "Someone drank Tennent's Light ale and smoked Dunhills and watched her. I search the ridge behind me. I pick up a sharp rock and turn in a circle, so the litter and the dry leaves crackle under my boots. I wait for a man to appear. I'm not frightened, I want to see who did this to her."

3. "Through the gap in the branches, I watch the snow fall on her house. The ridge is so quiet I think I can hear the snow as it lands on the froze ground. An absolute bleakness takes hold of me. The men searching the grounds move deeper in the woods."

4. "She had so much left to do. It isn't that she had something grand in mind, at least not that I know of. It is worse than that, she has been taken away from everything, she lost everything. She likes red lipstick, and will never again stand in the aisle at the chemist's, testing the shades on the back of her hand. She likes films, and will miss all the ones coming out at the holidays that she planned to see."

5. "When I open the door, I think someone else is inside. I have a sense of the pressure changing, a floorboard lowering. I wait on the step, listening, but i don't hear another crack, or a door close. I can't do this."

6. “I can’t sleep. The dread grows worse with every hour and warps the next day into something I won’t survive without rest. I don’t have sleeping pills or tranquilizers, but I do have the bottle of red wine I brought from London for Rachel. There isn’t a corkscrew in the room. . . . There is a screwdriver on top of the bathroom cabinet. . . . I dig the screwdriver into the cork, pushing it down the neck of the bottle. There is a crash as the cork breaks the seal and wine erupts. Red liquid gushes onto my stomach and drips down my chest. . . . The wine tracks down my arms along my veins. The wet plasters my shirt to my stomach. There are red spatters on the walls, and already the room smells rancid.”

8. "I remember thinking that this isn't the newest moment in history but the oldest, that time isn't thinning but thickening."

9. "I sit on my heels in bed holding the carving knife. My body is stiff with fear. The manager sleeps in a set of rooms on the floor below mine, and I don't know if sounds can reach her from here. It's only the pipes, the building settling. It's nothing, I imagine Rachel saying to herself on Friday, there's no one there."

10. "My voice stays composed as I say good-bye. At the end of the alley, I turn into the crowds on the high street, The loneliness has me by the throat, and i hear Rachel tell me, You're fine, all your have to do now is get home, all you have to do is get home."