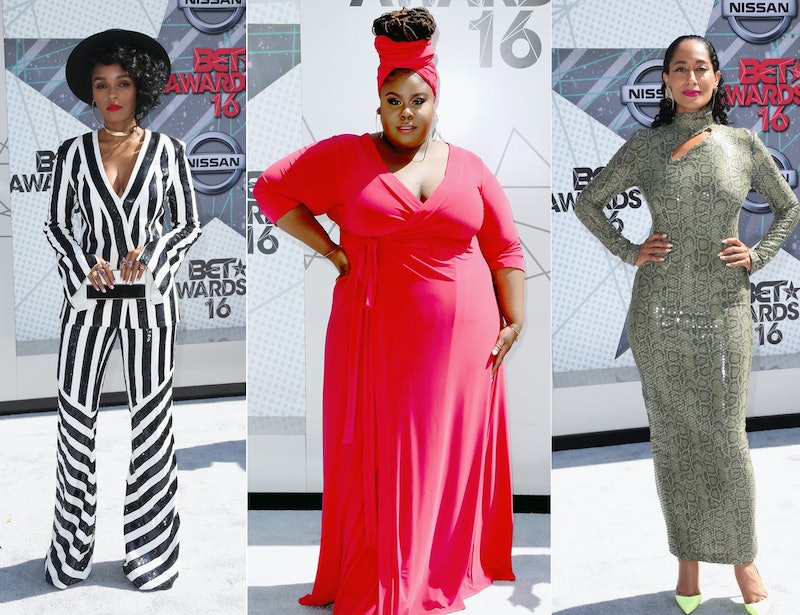 If there was ever an awards show red carpet to perfectly embody the idea of self-expression and "Hollywood glam" at its most hybridized, it would undoubtedly be that of the BET Awards; and all the looks at the 2016 BET Awards exemplified as much. Founded in 2001 by the Black Entertainment Television network, the BETs are all about commemorating people of color and other minorities within all facets of entertainment: From music to acting to sports. Perhaps because it focuses on entertainment as a whole — unlike the majority of award shows, which target film, television, or music independently — the BETs have evolved into an opportunity for personal style to reign supreme on the red carpet.

From Beyoncé's sheer, embellished, royal blue gown at the 2001 awards, to actor and singer Brooke Valentine's midriff-baring, 2006 high-glam look, the BETs have seen no shortage of uniqueness. The awards on June 26 will feature performances by Alicia Keys, Jennifer Hudson, and Young Thug among others, so there's no doubt celebrities will be bringing their sartorial A-Game. Plus, with Black-ish stars Tracee Ellis Ross and Anthony Anderson hosting, there's no better time to dress to impress. Without further adieu, here are all the looks from the 2016 BET Awards. Get ready to cry tears of fashion wonderment.

The BET carpet officially began with Beyoncé's "Formation" dancers sporting some of the most breathtaking ensembles to hit a red carpet, possibly ever.

Alicia Keys stunned in a bare face and simple jumpsuit.

Co-host of tonight's show Tracee Ellis Ross ruled the carpet in a high neckline and bodycon silhouette perfect for queens.

This babe is everything and will always be everything.

Queen Bey opened the show with a surprise rendition of "Freedom," only to disappear immidiately thereafter. But her bodysuit and braids combo will be remembered.

Designer Stephon Mendoza's ensemble was too much for words, in the grandest of ways.

Actor Naturi Naughton's topknot in combination with that classic dress are too much to handle.

Actor LisaRaye made the totally-white jumpsuit seem like a doable feat. PRAISE.

Never will there exist a better jumpsuit. Never.

Recording artist Fantasia Barrino was the definition of high glam.

Actor Marsai Martin proved that you can never go wrong with a classic white frock.

EJ Johnson wore a look that Prince himself would have been proud of.

Actor Eva Marcille is going to be the reason the extra-mini comes back into vogue.

Why are child actors so damn precious? Why?

Actor Lela Loren's cut-out gown was so bold and so chic.

Never has there been a prettier purple than Danielle Mone Truitt's keyhole and cut-out gown.

Mesh and cutouts are a girl's best friends.

Rapper French Montana killed it in some angelic-esque threads and kicks.

The LBD will never go out of style, people.

Actor Regina Hall made mesh appear elegant. For that, she is an official style pro.

Actor Meagan Good's emerald gown was too spectacular for words.

One half of our beloved Sister, Sister team, Tia Mowry's printed and long-sleeve mini was bold and badass.

Comedian and actor Loni Love proved that plus size babes can rock any bold print under the sun.

German singer/songwriter Bibi Bourelly is a reminder that the punk prep aesthetic must never die.

Never have Harry Potter-esque spectacles looked as astonishing as they do on Lil Deedee.

Actor and model Jasmine Sanders' dress was a dose of the punk and the secretarial in equal measure.

The belt, the bling, the glasses: perfection.

Tanzanian recording artist and singer Diamond Platnumz had the best tie of the evening. No question.

Model Millen Magese won the award for Brightest Outfit Of The BETs.

Miss Vee's ensemble is basically the '70s in a dress.

Actor Katlynn Simone rocked what looked like a ballgown to the BETs and it was a phenomenal moment.

Black-ish actor Yara Shahidi slayed in a strappy dress reminiscent of the '90s.

Comedian and actor Orlando Jones is making a case for color-mixing.

Musician Tasha Cobbs definitely made a case for sticking to classic black and white.

Nigerian rapper Falz eschewed the classic suit in exchange for this white-on-white number.

On the opposite side of the coin, rapper and record producer Akon rocked a simple black-on-black ensemble perfect for New York City.

This studded number is everything.

The sleeves on this dress are '70s boho at its glammiest.

South-African actor and model Nomzamo Mbatha is giving us a behind-the-scenes peak into her BETs prep; and if that glorious head scarf is any indication, her look tonight is going to kill it.

The psychedelic-esque pattern-mixing in this look is out of this world in the best of ways.

Comedian August O'Neal is keeping things simple in a cardigan of dreams.

Author and founder of Mama Glow, Latham Thomas is rocking the high bun and head scarf look in her BTS shot.

What a magical night of sartorial prowess.