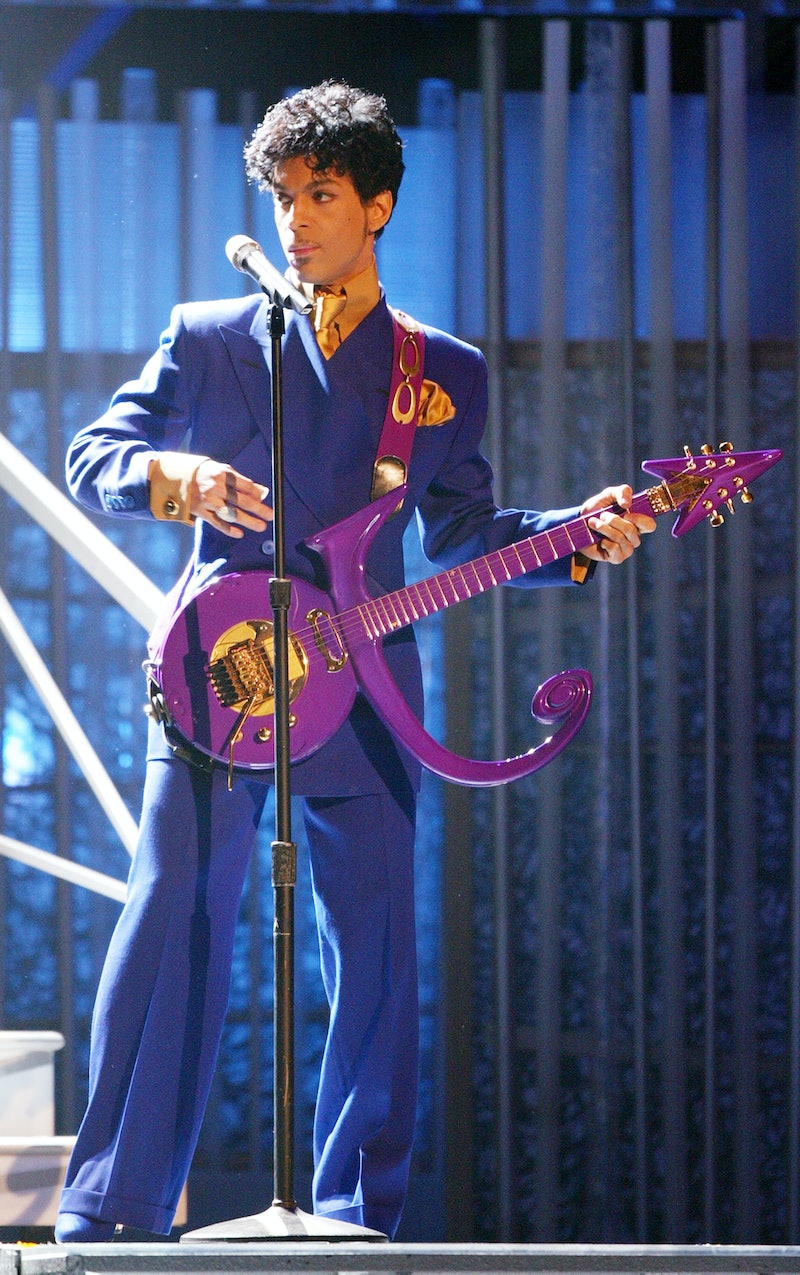 Prince was a major presence at the 2016 BET Awards and I'm not just talking about the touching tributes that took place during the ceremony. All of the Prince-inspired fashion at the 2016 BET Awards was an absolutely perfect way to celebrate and pay homage to the late singer and guitarist, who passed away at the tender age of 57 in April of 2016. Prince was an amazingly talented guitarist, but he was also a style icon. His look was often '70s-inspired, skintight, and androgynous. Purple ensembles were the norm for him, because of course they were! It was his fave hue.

Several celebs admitted to taking inspo from Prince with their 2016 BET Awards outfits. Some were apparent. Others were more implied and weren't accompanied by verbal confirmation. But they didn't need to be, either.

Prince's style was gender-bending, flashy, and adorned. It was a true treat to see celebs take that template and make it their own, all the while celebrating his life, his look, and his unmatched talent.

Observe all the celebs at the 2016 BET Awards that paid their respects to Prince via fashion. It wasn't always literal — outfits weren't always comprised of Prince's beloved purple — but the inspo was obvious.

Janelle Monáe has always presented a unique take on menswear, adding feminine touches and twisting the boundaries of gender with her clothes. Prince often did the same. The pint-sized singer wore a black and white striped Sass & Bide pantsuit with statement bell-bottoms, which was a favorite silhouette of Prince, as well.

"I want to do something that felt Prince-inspired as well as Janelle Monáe classic," the singer said on the red carpet. "I am a no drama type of girl and I am here to celebrate his legacy in a way [that I think] he would like." Monáe also wore plats and opted for a purple mani — both elements are Prince-tastic.

'90s fave Tia Mowry wore a high-collared, long-sleeved, Roberto Cavalli mini and revealed that it was indeed Prince-inspired. The print was abstract and the dress had an unfinished, slashed quality. Mowry's sexy frock was flashy and adorned, two qualities that certainly defined Prince's image. It was also anything but demure, which is another way to describe Prince's signature style.

EJ Johnson, son of former NBA superstar Magic Johnson, also summoned Prince's flamboyant style, which so often blurred gender lines. Johnson wore a sheer black dress with chest-baring V, which he paired with a silver, fringed belt. He added pointy boots, which was another nod to Prince — known for an adoration of platforms.

The designer wore a loose, black cloak. It was an adventurous choice that certainly culled inspo from The Purple One, who was not afraid to take chance when it comes to fashion.

The artist known as Jidenna rocked bright green trousers and a vintage-look print shirt that looked yanked from the Prince playbook.

Ingrid, also a recording artist, had a boho look with flashes of purple. I couldn't help but think that Prince was a bit of inspo.

Rapper (and Khloé Kardashian's ex) French Montana rocked a monochromatic, champagne-hued ensemble that was very Prince in its presentation.

Prince will live on in the memories of all those whom he inspired.