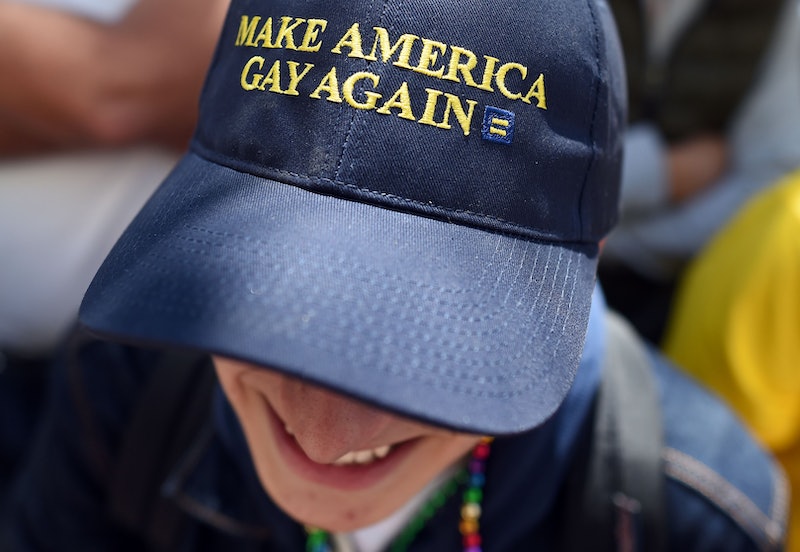 Millions of pro-LGBT Americans across the country took to the streets this weekend to celebrate Pride Month, and as usual, New York City hosted one of the biggest celebrations of them all. By all counts, it was a smashing success, and was capped off by a surprise appearance by Hillary Clinton. But if you're wondering how many people marched in NYC Pride in 2016, the answer is a bit complicated.

For one, it's always going to be impossible to get an exact count of how many people marched down a street during a day-long event. There's also the tricky business of distinguishing between people who marched in the parade and those who simply came out to cheer from the sidelines.

That said, we have some rough estimates. According to organizers, around 30,000 people marched in the parade itself. Law enforcement officials expected that there would be around 2.5 million attendees in total, and that more or less comports with CBS News' reporting, which found that almost 2 million spectators joined the marchers. Either way, that's a big jump from last year's march, which had around 1.6 million attendees in total, according to The Wall Street Journal.

That could be because this year's Pride March was a special one, for a number of reasons. First, it fell on the one-year anniversary of the Obergefell v. Hodges decision, the landmark Supreme Court case that legalized same-sex marriage nationwide. This year's march also happened to come just days after Stonewall Inn, the famous gay bar located in Greenwich Village, was designated as the first national LGBT monument in the U.S.

And of course, it's impossible to talk about this year's pride without noting that just weeks earlier, 49 LGBT Americans and allies were murdered at a nightclub in Orlando. And on that same day, a plot to attack a gay rights march in Los Angeles was narrowly foiled by police. Both incidents were dark reminders of the daily threats that LGBT Americans still face, but they also may have moved even more people to come out and to show their support at this year's Pride march.

Thankfully, there were no reports of serious violence at NYC Pride this year, and unsurprisingly, the march was full of tributes to victims of the Orlando shooting. The event also saw the public debut of Gays Against Guns, a newly-launched advocacy group devoted to passing stronger gun laws. Although the tragedy of Orlando won't be soon forgotten, NYC Pride was a reminder that, despite the homophobia and bigotry that still exists across the U.S., the gay rights movement isn't going anywhere.