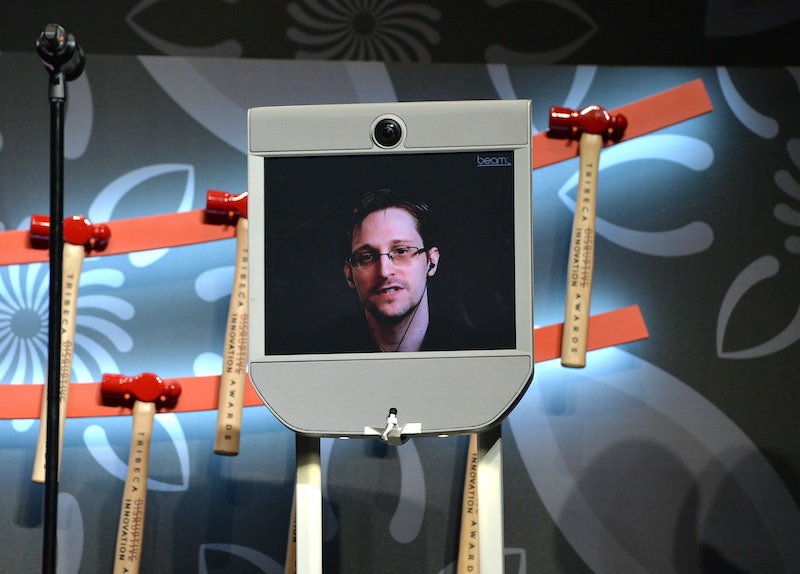 Despite being stuck in Moscow without a valid U.S. passport, NSA whistleblower and transparency activist Edward Snowden has developed a workaround that allows him to have eyes and ears on the ground across the United States. Well, sort of. Is Snowden a robot now? It was recently revealed that he has a robot clone that lives in Manhattan, New York, and it is helping spread the word about the importance of staying vigilant in the fight to protect our digital civil liberties.

"Regardless of the fact that the FBI has a field office in New York, I can be hanging out in New York museums," the activist-in-exile told New York's Andrew Rice. But enjoying a virtual reality tour of New York's cultural scene isn't the primary purpose of Snowden's robot clone, although it is a nice additional feature. (Snowden told New York that he considers himself "an indoor cat.")

The robot, which is basically a glorified tablet attached to a Wi-fi controllable Roomba, allows for Snowden to appear at speaking events and engagements. The project is a collaboration with Snowden supporters at the American Civil Liberties Union (ACLU). At the conclusion of the meeting or talk, the unit is then powered down and brought back to the ACLU's Manhattan offices.

The learning curve isn't that high when it comes to interacting with the "Snowbot," as it apparently becomes more comfortable interacting with Snowden's robot clone: "After a while, you stop noticing that he is a robot, just as you have learned to forget that the disembodied voice at your ear is a phone," Rice said.

No matter if you call it a telepresence, or prefer calling it the "Snowbot," there is no question that Snowden's electronic avatar represents a new twist on an old concept: that of being in exile. Traditionally, going into exile (whether voluntary or not) was a way for an activist or dissident to escape harsh treatment in exchange for removing their voice from the conversation.

This puts the fate of the "Snowbot" in a tricky position. While the Obama Administration's official position on Snowden's whistleblowing has remained officially quite icy, allowing Snowden to freely move about the country via telepresence challenges that official line. Because, really, what could the feds do? Arrest a robot? Arrest the lawyers at the ACLU who are facilitating the project? That's not going to happen.

Allowing Snowden to have a voice in U.S. affairs — albeit, one delivered by a robot — presents an interesting case study into what politics looks like in the 21st century. From the looks of things, Snowden is going to be on the forefront of this field for some time.