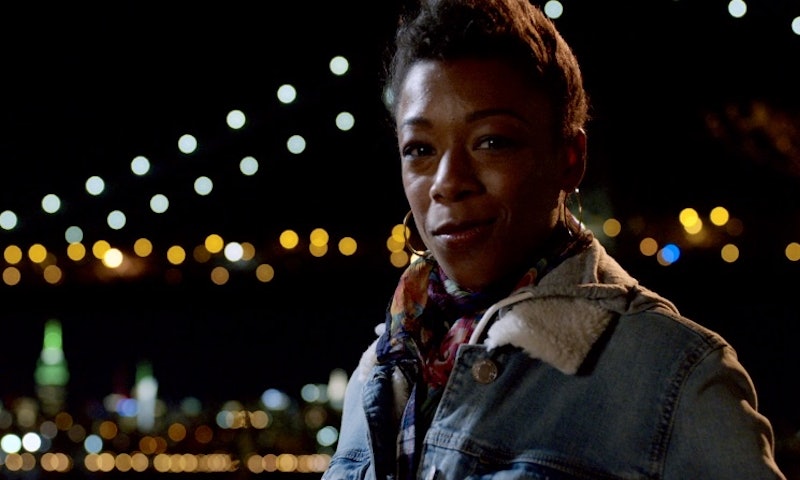 If you haven't finished Season 4 of Netflix's Orange is the New Black, you might want to turn back now, since I'll be writing about some major heartbreaking spoilers. Those who have made it through know that sadly, Orange is the New Black character Poussey Washington dies in a tragic turn of events in Episode 12. In an interview with Bustle Samira Wiley opened up about leaving Orange is the New Black, and she says it wasn't easy saying goodbye to the cast, crew, and set that has been apart of her life for so long and launched her career. "I want [the fans] to know at the end of the day, even though it's a television show that makes us feel so many real things, it is a television show and Poussey may be gone, but Samira is OK," she says. "Samira is here and she has no bitter feelings."

In fact, Wiley recalls that she was told about Poussey's Season 4 death before the season was in the planning stages. "I knew vaguely, because there were no scripts written yet, only ideas," she says. "All I heard was that my character wasn't going to be there at the end of the season, and it was going to have something vaguely to do with Black Lives Matter. I was shocked, a little confused, and so many things." She also says had to keep this all a secret from the cast and crew, which was quite a challenge.

"Keeping it a secret was one of the hardest things I ever had to do — especially going to work every day with the girls doing scenes," Wiley says. "With every episode, we were getting closer and closer to it happening ... Not only was it a secret from the people in the show — I didn't tell my parents, I didn't tell anyone."

And, that's not all Wiley has to say about the major moment for her character.

Her Girlfriend Wrote The Script

The script for Episode 12, titled "The Animals," was written by Wiley's real-life girlfriend Lauren Morrelli. They met on Orange is the New Black and still kept it professional as Morrelli penned Poussey's untimely passing. "I started as a fan of her writing and I still am a fan of her writing, so I feel honored that she was the one who was able to write it," Wiley says. "I think she wrote a beautiful episode. I knew she was writing it and could've easily have said things to her, but I would've messed it up if I tried to influence her." Wiley adds with a laugh: "I'm not a writer."

The Final Day Of Shooting

Once the script was written, Wiley says shooting the episode was the toughest, since it was her last day on set with the entire cast. Poussey does appear in Episode 13, but it's in a flashback and not at Litchfield. "Shooting the last scene of Episode 12 was one of the hardest days on set I've ever had," she recalls. "I had to say goodbye to the set. I had to say goodbye to wearing those clothes for the last time. They let me take my clothes home, which was really nice." Wiley teared up when describing a sweet moment in which one of the producers took her around the set one last time and take a few mementos of Poussey.

"I'm so thankful to her for doing that because it was something that I didn't know I really needed," Wiley says. "To be able to go back on set and pick up the coffee cup I would drink from every morning, pick up my sweatshirt and my prison boots. That was hard, but it was really nice to be able to have those things and have them forever."

But, she also takes away so many great memories from her years on Orange is the New Black. Wiley says she had a blast acting opposite Blair Blown, who played Judy King. "I met her before she even joined the cast at a play reading and we got to know each other that way first," she says. "I just had a great, fun time playing with her." And, Wiley says the first season is still a period of time she cherishes greatly. "Season 1 was probably one of the most exciting times in my entire life," she says. "Every single thing I did with Danielle [Brooks, who plays Taystee], every single I did as Poussey — from being in the cafeteria talking to fighting over the TV. It's made me who I am and this show has given me my career."

Her New Gig On You're The Worst

Wiley has moved on to a new role on FXX's You're The Worst as Gretchen's therapist — who she says it's completely different than Poussey — and has already enjoyed a few days on set. The series was created by former OITNB writer Stephen Falk, who actually came up with Poussey's back story in the Season 2 episode "You Also Have A Pizza."

"She's totally different from Poussey and I'm so happy to be able to let the world know that I'm not Poussey," Wiley says of her new role. "I am an actor. And, like all of the people I admire, I want career longevity and I want to be able to play a range of different kinds of characters, so I'm really really happy to be cast."

So, Poussey may be gone, but Wiley's career is far from over.