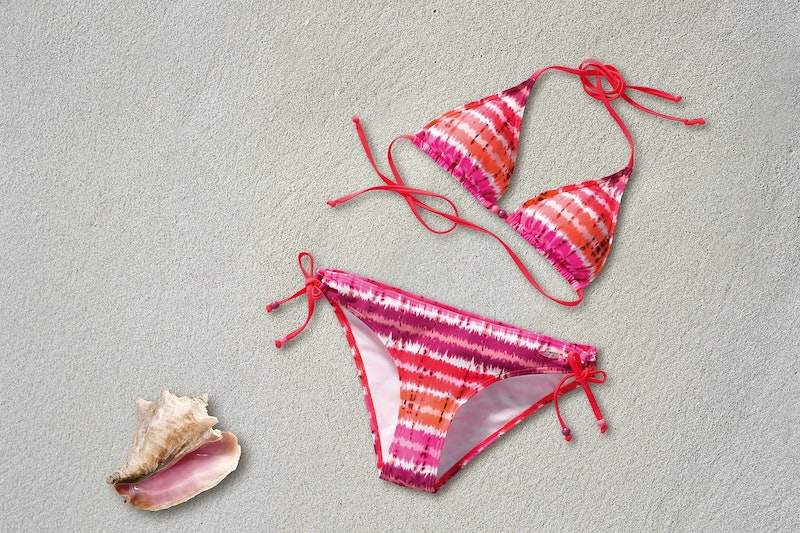 Summer is here, and along with it come all the insecurities that many of us have been hiding underneath our jeggings and leather jackets for months on end. Some new statistics are in, and it seems self-consciousness is still around, regardless of "body positivity's" popularity. Americans hate wearing swimsuits, according to a new independent survey conducted by Planet Fitness. In fact, approximately 33 percent of the Americans surveyed by Planet Fitness said they would "rather go to the dentist" than wear a bathing suit in summer, as disclosed in the survey's press release.

But that's not all: The independent survey also revealed that 46 percent of folks interviewed did not feel confident in their swimwear at all. This implies to me that although these people will wear their bikinis, tankinis, cut-out swimming costumes, or any variety of swimwear, they will not feel as comfortable as they should.

Somewhat thankfully, however, Planet Fitness' survey also disclosed that 76 percent of respondents "are more critical of their own appearance in a bathing suit than that of others." This is a fact that might instill confidence in anyone heading to the beach this summer: As much as we may be fretting over how we look or feel in our swimwear of choice, the truth is that everyone else is too busy worrying about themselves to care about your back rolls.

Planet Fitness’ Director of Health and Fitness Brian Zehetner commented on the results with a sense of understanding and empathy. “People are often too hard on themselves when it comes to their body image," he said in the press release. "And it’s especially difficult for many during the summer and bathing suit season."

Although one might expect the subsequent advice from Planet Fitness to be full of strict diet and workout routines, the focus is instead on learning to love yourself and the body you're in. Tips found in the press release for the survey, like "good vibes only" and "it’s OK to treat yourself," aren't designed to shame, but inspire.

The fitness company has also coined the phrase "beachtimidation" — similar to the "gymtimidation" that they actively discourage in Planet Fitness gyms — to describe these feelings of self-consciousness that the majority of Americans seemingly feel in their swimwear. The fact that we are so often afraid of wearing our swimming costumes simply because of how our bodies look is an upsetting truth. But knowing that even some gyms are out to encourage people to find the self-love needed to wear whatever the hell they want is inspiring. Perhaps the world is (very slowly) changing its body shaming tendencies.

There's a lot of talk of dieting and weight loss when it comes to the summer months. But by having everyone — even gyms — hop on board the self-love train to promote acceptance over self-hatred, the culture of weight loss in our society will hopefully step further away from negativity and fat-phobia.

More like this
Instagram & Facebook May Finally Lift Their Notorious Nudity Ban
By Allie Fasanella
Selena Gomez Dismissed Trolls' Comments About Her Body After The Golden Globes
By Stephanie Topacio Long
Phoebe Dynevor Serves ‘Bridgerton’ Underboob In Stunning Floral Gown
By El Hunt
Attention, Millennials, Italian Charm Bracelets Are Officially Back
By Hannah Orenstein
Get Even More From Bustle — Sign Up For The Newsletter
From hair trends to relationship advice, our daily newsletter has everything you need to sound like a person who’s on TikTok, even if you aren’t.