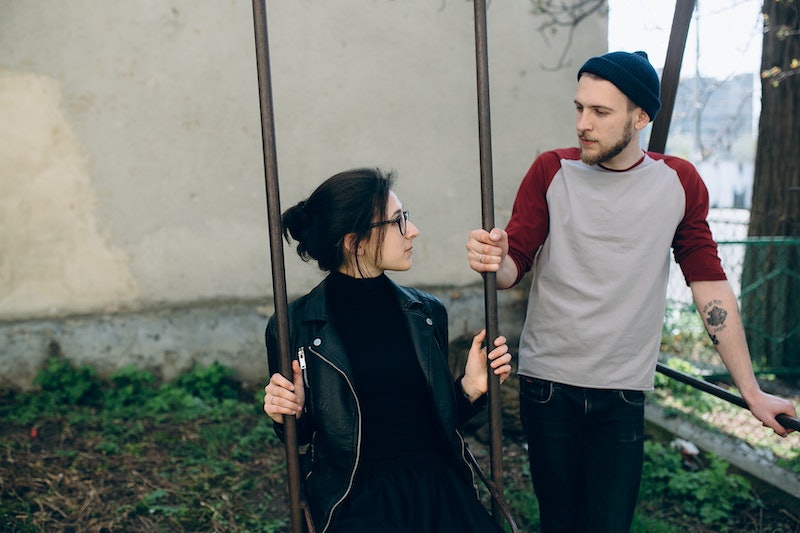 No matter how it happens, one or both of you are left feeling pretty crappy when you call it quits. But one of the hardest ways a relationship or dating situation can end is not with a huge blowout or a lot of tears, it's when your partner doesn't really have an explanation, when they just sort of... lose interest in the relationship.

Sometimes it's not your fault — sometimes it's just how time passes or how people change. Sometimes it may be down to something you do, distancing yourself, or hurting the other person, which leads them to zone out of the relationship. But unless they give you a reason why, the important thing is to not be too rash if your partner looses interest. "Regardless of the reason, what's important is that the person 'left behind' because their partner lost interest does not try and change themselves as a result," relationship coach and founder of Maze of Love, Chris Armstrong, tells Bustle. "I once told a client 'if parts of you drew your partner away, maybe it's time to look within but don't make sudden changes over one person losing interest'."

So if you feel like there's a pattern of people you're dating losing interest, maybe it's time to look inward, but remember that there are so many reasons things can happen.

Oops. You know how sometimes people warn you not to rush into anything because you can feel so intensely about someone but it wears off? Yup. That happens. Sometimes if they loose interest because, unfortunately, it was never really there in the first place. The lust fades and there's no foundation to back it up. It sucks, but it's true. "The initial excitement and energy that their partner brought no longer exists. It can be common for people to put their best foot forward upfront, only to fall back to their natural self as the relationship progresses," Armstrong says.

2. They Can't Get Over Something

Sometimes if you've hurt someone, they can't get over it no matter how much they try. Although it might seem like water under the bridge, they internalize it and can grow distant until they completely shut down to you or the relationship. Some things are hard to get over.

It's not always that complicated. We all change, but sometimes those shifts are seismic enough that they're just not interested in— or looking for— the same things any more. "The person that loses interest has changed or has discovered some things about themselves," Armstrong says. "It can be very common for two people to start dating and break up for seemingly no reason. They didn't fight a lot and communication was good, but perhaps someone found themselves evolving and realizing that the person they have evolved into wants different things in a partner."

4. Something Else Is Taking Priority

Not everyone makes their relationship a priority. If their job, or even their hobbies, take over then their relationship will hold less and less interest for them. Maybe it's one big passion, maybe it's just being a bit scattered and their attention jumping around, but it's hard to go through.

5. They Meet Someone Else

Sometimes, especially during the early stages of a relationship, they just meet someone else. It's definitely a gut-wrenching, sh*tty feeling, but at least you have a definite "why".

Not everyone is great at settling down. They get pulled into the rush of an early relationship, but then they just get restless. Do they really want to be with just one person — this person? Commitment-phobes are constantly looking for greener grass, so it's easy to lose interest in what's right in front of them.

Maybe you've grown and evolved into a new person, one that you're happier with — it just doesn't necessarily mean that your partner will be too. That's OK. When their interest wanes, don't be afraid to go and find someone who's interested in the new you. They're out there.