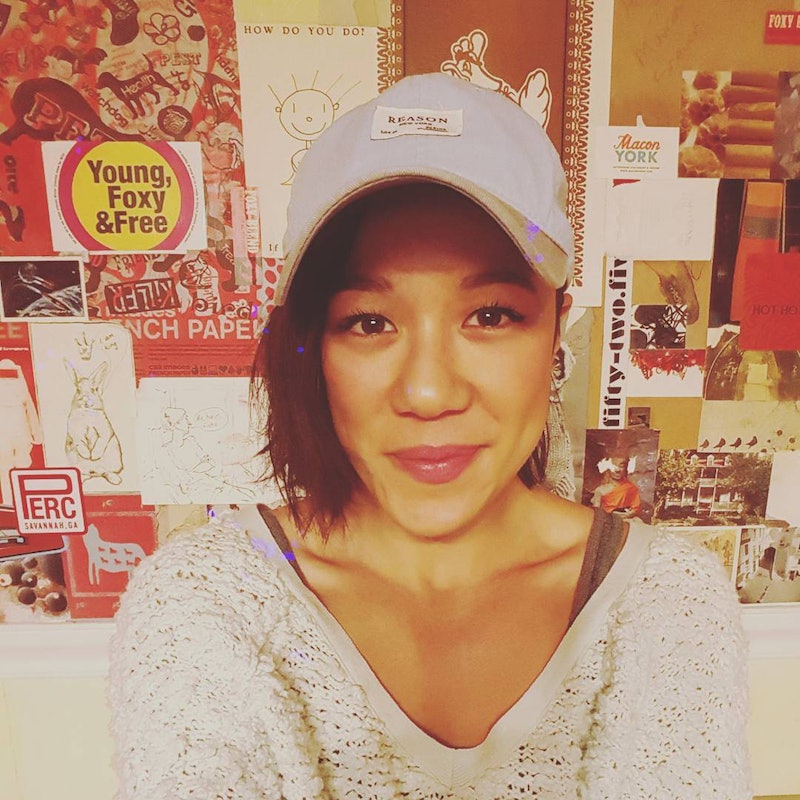 I was kind of boring for the first 26 years of my life. I mean, I may have been doing things academically and professionally that were considered interesting to some, but when it came to my style, I never took risks. (Well, there was that one time I straightened my hair with a flat iron in college, only to walk out of the bathroom and have my very stylish friend Jae demand I never do it again. I don't blame him. It was pretty bad.)

My early adult years consisted of the same haircut, the same clothes. I was too scared to branch out and see what would happen. Every time I mentioned to a boyfriend that I was thinking about cutting my hair short, their wide-eyed, "please-don't!" look planted a huge seed of doubt in my delicate head. I was convinced for a while that nobody would love me without my long locks. So I stuck with the same long-haired, conservative appearance I've had since I got my first period.

Last year, though, I finally reached a point where I didn't give a sh*t. I was sick of people telling me what I was supposed to do with my life, what I was supposed to wear in order to be seen as a presentable, successful woman in the world. I decided to go rogue. I wanted a style overhaul, and I wanted the difference to be noticeable.

I had been with my current partner for about a year, and we had recently been traveling through South America. At that specific time, though, he was in Costa Rica for a surf trip, while I was in Peru with my friends. They all helped me gather up the gumption to pull off this crazy stunt.

I went from this:

During the month that my boyfriend and I were apart, I got several tattoos, shaved the side of my head, and chopped off the rest of my hair. I traded in all the beige, wholesome articles of clothing I owned (the things in-laws like you to wear at family reunions) and instead donned sneakers, mixed patterns, and played around with clothing and accessories most would call tomboyish.

I did it all without calling or messaging my SO with a fair warning. A rash decision? Nah! It was a whole series of rash decisions. Here's what happened as a result.

I broke the news to him with a picture of a freshly-done tattoo on my forearm from the tattoo parlor. He genuinely thought it was a joke. He kept asking me if I was serious, and if I was feeling OK — because anyone who knows me knows that I'm deathly afraid of needles, and had always wept at the mere thought of getting a tattoo.

As I made more changes, I didn't warn him advance, but found I kept asking for his approval after the fact. What do you think? Are you OK with this? I sent variations of these questions to him after my friend shaved the side of my head. He kept saying he was fine, and that I could do whatever I wanted — but I could sense that something was off. Things were starting to sour. He wouldn't respond to my messages for a while; he was quieter than usual on the phone. All lines of communication were feeling awkward.

We got into a screaming match over the phone one night, which we both knew was coming, as I kept pressing him into telling me what he was really thinking. He finally blew up and insisted that getting something as permanent and lasting as a tattoo was something that deserved, at the very least, a check-in with your SO. He claimed I wasn't considering his feelings in the slightest bit, and that I was being really selfish. And apparently, having a shaved head was just as much of a shock, and it indicated that I was going through a quarter-life crisis.

Of course, this set me off, since I completely disagreed. I yelled back, explaining that whatever I do with my body has nothing to do with him. I don't need approval from you! My voice shook as I tossed several colorful curse words in his direction. We hung up in a huff and didn't speak to each other for almost three weeks.

3. He Admitted That He Was Being Controlling

It was a reflective three weeks for him, but I spent most of this time breaking in my new Doc Martens and experimenting with high-waisted jeans. My SO called one afternoon and said he wanted to talk. I listened to him sincerely apologize, saying that nothing I do to my body or hair could possibly make him love me any less. It was sweet, but what he said next was much more important.

"I realized that it was me trying to control you in some small way," he said. He told me he had spent time looking back on his past relationships, and realized for the first time that this was a pattern he needed to break.

In every other aspect of our relationship — what I do, where I go, who I hang out with — my boyfriend has never had an issue with control. But he admitted that when it came to reacting to my changing appearance, this was the one avenue he needed to address. His honesty was refreshing, and I knew then we were going to be OK.

4. We Were Forced To Confront Some Gender Role Issues

We discussed the matter several times over the next few weeks, which helped my SO understand the kind of pressure women are under from mainstream patriarchal society to look a certain way. We're supposed to be feminine, but strong. Approachable, yet mysterious. Sexy, but modest. And the expectations change from setting to setting, so we get jerked around in ways that men will never understand, because they've never encountered anything like it.

My partner and I talked about how common it is for everyday guys to feel like they deserve a say over what their girlfriend wears. He said it's something that, for him, doesn't arise consciously. He and so many other men have just grown up in a culture that indirectly teaches them to be controlling, and it manifests when they least expect it. I explained how some compliments about our looks are nothing more than gendered remarks, and he started to become more aware of the true nature of his comments about my appearance.

5. He Changed His Look

I don't know if he was feeling inspired, or if his competitive side took over and he felt compelled to keep up with my transformation. Either way, when we reunited after our time apart, some dude who resembled my SO walked toward me — with a beard. He's always been a clean-shaven kinda guy since the day I met him, so it was a shocker. He also cut his hair way shorter than normal, giving him a brand new look. I liked it.

The romantic in me saw this as a fresh beginning. In a sense, we both acknowledged that the way we look is only a small part of why we fell in love with each other. He might have a beard, and I may cut my hair even shorter and wear a baseball cap. But whatever happens on the outside, we know there isn't anyone else we have to answer to — not even each other.