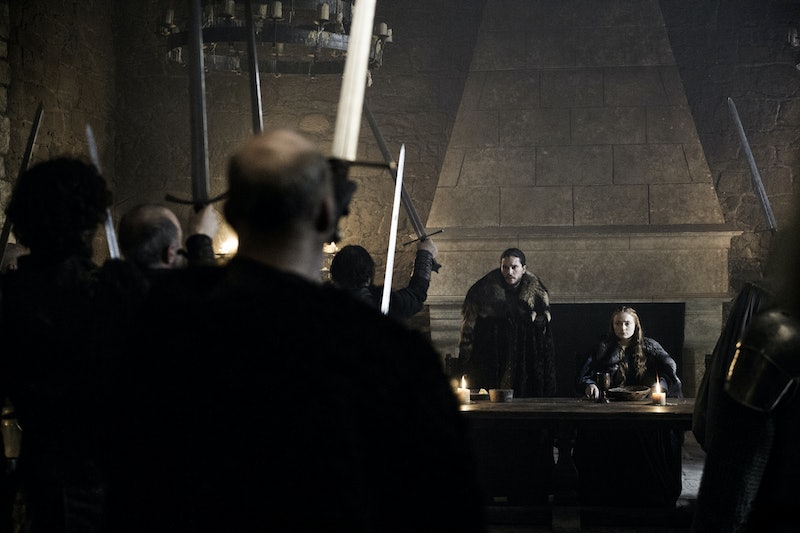 Game of Thrones Season 6 had some unbelievable reveals and mind-blowing visual sequences, but my favorite moment was easily Jon Snow and Sansa Stark's reunion and hug. This family has been separate for far too long. Will all the Starks reunite in Game of Thrones Season 6? The days when they were scattered all over Westeros and Essos and almost farcically unable to meet may be coming to a close.

If you were to ask me last year which Stark children I wanted to get back together, I never would have gone with Jon and Sansa. I would have wanted Sansa and Arya back together first, then Bran and Rickon, and then maybe Jon and Bran (because of his Raven powers), Jon and Benjen (because of their connection) or Jon and Arya (because he gave her Needle). However, it turns out that Jon and Sansa are maybe the best team ever. They have similar sardonic senses of humor. They believe in each other and can learn from one another's experiences. The fact that they each thought the other should move into the master bedroom is too cute. There's also plenty of room for conflict, between Sansa's potential disappointment over the North choosing Jon over her, Jon's true parentage, and whatever Littlefinger is planning next.

However, while House Stark is pretty strong these days, publicly they only have two members. Now is the time for the others to make themselves known. Plus, I don't know if you heard, but Winter has officially come. We need all the Starks we can get. Here's how likely I think each upcoming reunion will be.

He's physically the closest to a reunion right now. However, hasn't he always been? It would have been nice if Uncle Benjen had left him a horse, but whatever. Clearly, he needs to return ASAP so that he can casually pull Jon aside and tell him everything he learned about his birth. Just as the North decided that Jon Snow is their "King" and heir to House Stark, Bran discovered that he's not the Stark they think he is.

I have a feeling that this reunion is coming very, very soon. Now that Bran knows such pertinent information, he needs to get it to Winterfell. Plus, if Arya can get from Braavos to Riverrun in two episodes, it should take Bran no time to cross the wall and get home. Whether or not both Jon and Sansa will be there, on the other hand, is the thing.

A girl, on the other hand, is more of a wild card. She's back in Westeros, but it didn't look to me like Arya Stark has plans to go back to Winterfell just yet. The fact that her first act was to kill Walder Frey is incredibly telling. I wouldn't be surprised if she headed to King's Landing to take out Cersei and the Mountain next. She didn't want to go home just because she misses her family. She wanted to go home because she's on a mission. I think it's more likely that she runs into Brienne, the Hound, or even Gendry Waters before she knocks on Winterfell's door.

Unfortunately, as we learned in the finale, Benjen Stark can't cross the magical wall because he's a little too undead. So that long-awaited reunion will likely be the last to happen. However, that wall is definitely coming down soon — right? We haven't seen the last of Benjen, and hopefully the other Starks will be there when he returns.