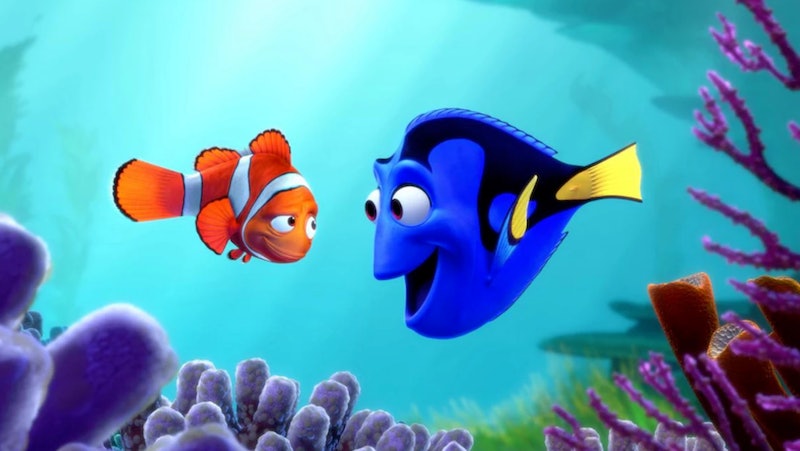 If you’re a fan of the Pixar Universe Theory and have been waiting to hear how Finding Dory fits into the mix, Super Carlin Brothers’ Jonathan Carlin has your back. A few days after the sequel to Finding Nemo commandeered a semi truck and careened into theaters, the YouTuber posted a video in which he postulates that the record-smashing Finding Dory is part of the shared Pixar universe, a thesis based on Jon Negroni’s The Pixar Theory. The essay-turned-book explores the hypothesis that every Pixar flick exists in the same universe and on one enormous timeline. Hey, whether you buy into it or not, it does make for an interesting thought experiment. (Not familiar with The Pixar Theory? You can check out Negroni's 2013 essay and his original Pixar timeline here.)

So, how and why does Finding Dory fit into the Pixar Theory? Here's an incredibly oversimplified one-sentence summary: Look at the intelligence of the animals and look at the state of the planet.

According to Carlin, the resourcefulness of the sea critters in Finding Dory indicate that the animals in this Universe are working their way toward achieving Ratatouille-level human-like characteristics (and are way smarter than, say, that doofy dog from Toy Story). Carlin posits that the better the environment (i.e., an environment that is less impacted by humans), the more the Pixar animals can evolve.

And as for the garbage-filled coast in Finding Dory? Carlin says that indicates that the planet is becoming less inhabitable (and on its way to becoming the barren wasteland in WALL-E). Therefore, Finding Dory falls onto the timeline shortly after Finding Nemo, and some years before Ratatouille (and hundreds of years before WALL-E). Oh, and there's some more stuff about humans and environment and evolution and machines? Enough outta me, just watch the vid!

(Wait, what about that WALL-E calendar Easter egg that's tacked to one of the walls of the Marine Life Institute? How'd that get there if the WALL-E era hadn't happened already? You know what, I'm going to go ahead and assume Hank the septopus traveled to the future and scooped up the calendar from, like, a gift shop on Axiom. After watching that septopus drive a bajillion-ton vehicle, I believe he can do anything. Including travel through time.)