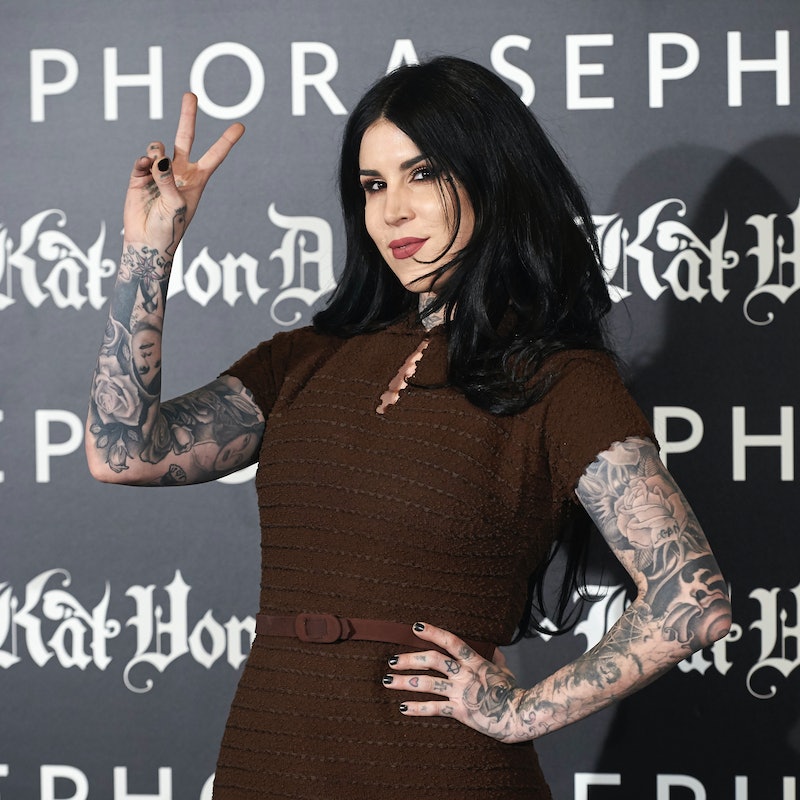 It's time to get excited, because the Too Faced and Kat Von D collaboration is officially on the horizon. There might not be an exact date yet, but the behind-the-scenes shoot photos that the two brands have shared are something too get excited about. Oh, and the fact that Kat Von D just teased a new lip shade on Snapchat that could either be a part of the collab or a permanent edition to her own range. This color would without a doubt be a best-seller either way, and you have to see it for yourself.

When rumors first began to swirl that Too Faced and Kat Von D were collaborating, the beauty world got super excited. Two top brands working together is always a good idea, after all. Then the social media sneak peeks began and things got even better. They the two brands have been promoting their upcoming partnership like crazy without revealing many details, proving just how pumped they are to be teaming up.

Snapchat is a beautiful thing, especially when it's used to show future beauty launches. While getting ready for her Too Faced campaign shoot with co-founder and Creative Director of the brand Jerrod Blandino, Kat Von D posted pictures featuring her applying a small red lipstick in a KVD tube. The caption suggests that it's a new shade of her signature Everlasting Liquid Lipstick, but there's no telling yet whether it has to do with the Too Faced collab.

Cue the freakout! She pretty much just said, "look at my new lipstick." The packaging looks to have the same Kat Von D Beauty lid fans are used to, but with a different design on the tube.

The color looks the same as the one she's seen wearing in the behind-the-scenes pictures as well.

Whether the lippie is part of the Too Faced collection or just a regular addition to the KVD Beauty range, consider me pumped. Hopefully there will be more sneak peeks of future launches to come!