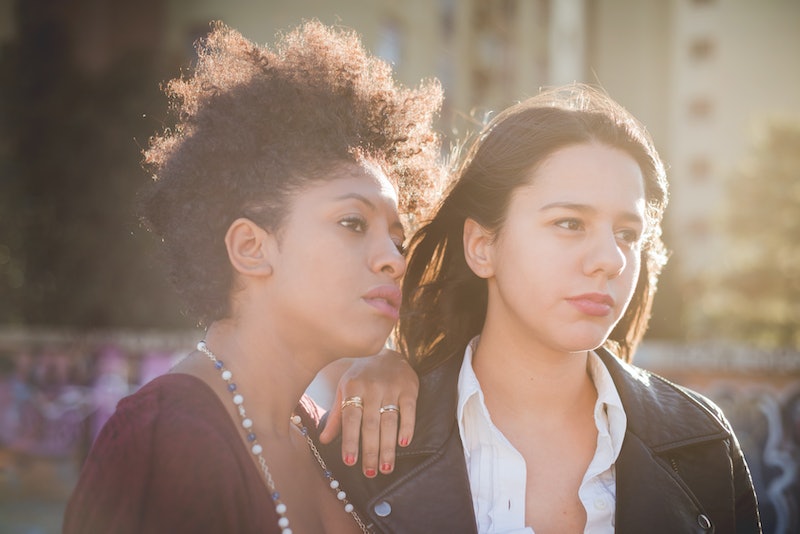 If your best friend is in a relationship that you think is not working well for them, it can be hard to know what to do. If you’re trying to find ways to help a friend in an unhealthy relationship, though, there are definitely things you can do — and things you should avoid doing at all cost. It all boils down to how you approach things, according to the relationship and love experts with whom I discussed this topic.

First of all, it’s really vital to avoid making your friend feel judged or criticized for their relationship. Though you may be super anti — and you might even be right in your feelings about the dynamic between your friend and your friend’s partner — if you outright divulge your problems with the partnership, you’ll only risk alienating your friend and putting your friendship at risk. Though you might not be able to solve anything straightaway, you’ll avoid hurting your pal and making them feel as though they can’t come to you with problems in the future. So — don’t put anyone on blast, and don’t let your feelings fly too obviously. Instead, try one of these things to do when your friend is in an unhealthy relationship.

"Let your friend talk, be supportive, and don’t pressure him or her to drop the relationship," Tina B. Tessina, aka Dr. Romance, psychotherapist and author of How to be Happy Partners: Working it out Together, tells Bustle. If you're aggressive, you'll just wind up pushing your pal away. "Instead, offer things you learned from your past relationships that might help strengthen your friend in taking care of him or herself." Let things unfold naturally with your friend, and be a listening ear whenever she needs one.

It's not only helpful to share things you've learned from past relationships, as Tessina suggests; it's also useful to tell your friend about your own experiences in the past. "By sharing your own toxic love stories, you won't come across seeming like you're judging your friend for being or staying in an unhealthy relationship," relationship coach and psychic medium Cindi Sansone-Braff, author of Why Good People Can't Leave Bad Relationships, tells Bustle.

You can do this in such a way that it is subtle, and not obvious. "For example: Talk about how you made excuses for abuse, and ignored red flags along the way, and that you eventually learned that it's not your job to fix someone or to enable your partner," she says. "You can tell your friend just how much crap you took in the name of love before you finally mustered up the courage to walk away, but remind your friend that a relationship isn't supposed to bring you pain, it's supposed to bring you peace, love, and joy." Whatever you do, stick to sharing your own past and don't delve into what you think your friend should do.

"Bring it up gently," zen psychotherapist and neuromarketing strategist Michele Paiva tells Bustle. "Many people define themselves by their relationship and most will talk to their partner about you bringing it up, and the partner will say, 'She is just jealous,' planting a seed to isolate from you, which gives the partner more control." Rather than opening things up to go down that ugly road, bring it up without naming it outright.

"Gently bring it up, and gently offer to be there," she says. "Unless there is downright, measurable abuse [where] a police officer or therapist could intervene, there isn't much you can do but accept that this is your friend's choice." But you can talk about things related to the choices your friend is making.

"Instead of talking about their relationship, get them alone and gently encourage communication about their self-worth," she suggests. "A way to do this is even an old Audrey Hepburn movie, or any movie you like with similar triggers," she says. Bring up her character, she advises, and ask your friend questions such as, "Do you think she really is a party girl? Do you think she is searching for something? What do you think she really wants? Why is she hiding behind the party girl persona?" Though she might see right through you, this is one way you could approach things. Whatever you do, be gentle.

"You have to walk a fine line, as many people are in various stages of admitting to themselves the type of relationship that they are in," psychologist Nikki Martinez tells Bustle. "You can start by letting the person know you are there for them, and meaning it, and consistently telling them things that build up their self-esteem instead of tearing it down." Rather than framing things negatively and asking why they're doing this to themselves over and over, just tell your friend how awesome they are. "This may give them some of the insight and strength they need," she says.

"Don’t jump to judgment," New York–based relationship expert and author April Masini tells Bustle. "Chances are your friend already knows the problem, but needs to process it and find a receptive person to listen and guide him or her, so don’t jump in and direct your friend to follow your instructions." Rather than being controlling and bossing your pal around, go in with an open mind and see what your friend has to say about things.

With that in mind, ask the difficult questions, she says, suggesting queries such as, "How does that make you feel? How often does that happen? Have you ever hit each other? Did you call the police? Why not?" Whatever they say, just be present. "Don’t pass judgement on the answers, but do ask the questions so your friend can respond and hear his or her response out loud," she says. "This is how secrets come out and it’s possible to get back on a healthy track."

"Don't accuse her or criticize her, but instead ask her how things are going and give her time to respond," Dr. Ramani Durvasula, author of Should I Stay or Should I Go: Surviving a Relationship With A Narcissist , tells Bustle. "You may dislike [her partner] and [s/]he may be awful, but you can't shove that interpretation down her throat." You have to let your friend figure things out for herself. "Let your friend come to the conclusion on her own and then support her in the transition," she says. "If you do it the other way, she will end up defending the bad relationship." By going in slowly and leaving behind criticism, you'll get a lot further with your pal.

7. Tell Your Friend You're Always There

"Be very vocal about offering support and not judging," life coach Kali Rogers tells Bustle. "You want to try to stay away from pointing fingers or criticizing their relationship because that could potentially cut off your communication." Instead, tell your friend that you'll always be available.

"Make sure the door is always open for your friend to come to you, and the second she asks for help, be there in full force," she says. "It may be hard to stand by in the meantime, but you never want to leave someone in an abusive relationship alone to fight for herself." Though it can be difficult to watch your friend struggle, it's better to be patient and consistently there for them than anything else you might be tempted to do.

‎"Check in with them about how they are really doing," Carlyle Jansen, author of Sex Yourself , tells Bustle. "Listen without judgment of them and their reactions, [and] don't ask questions if they become defensive." Defensiveness is natural in this situation, and should be expected — not pushed against. If they are defensive, they are not ready yet, Jansen says.

"Let them know that it is always safe to talk to you. It may take several chats and not happen as quickly as you like, but you may have to wait until they are ready to see it themselves." In the meantime, keep checking in and being understanding.

"Tell them you are concerned and then offer to listen," marriage and family therapist Esther Boykin tells Bustle. "One of the ways that unhealthy and even abusive relationships thrive is because friends and family often lean to one extreme or another, either being silent about their concerns or by coming on strong and telling a friend that they should end the relationship." Avoid both, and try to remain as neutral as possible. "It's best to be honest but open," she says. "Offer your friend a safe, non-judgmental space to talk about what's happening in their relationship."

Often, that's all someone really wants, at least at first. "There is often a great deal of self-doubt involved in an unhealthy relationship, making it hard for them to see clearly; your empathy and willingness to talk about such a difficult topic without constantly telling them how to fix it can be incredibly effective in getting them to see the toxic pattern for themselves." Boykin says. Let go and let things unfold.

Relationship coach Jessica Brighton, agrees, telling Bustle, "Tell them that you are concerned for them in a non-confrontational and loving way." If you can be there like that, they'll be able to hear you better. "If you diplomatically point out changes in their personality, behavior and/or habits, they may begin to see that they are being adversely affected and agree that they need to end the relationship," Brighton says. "Offer your support, unconditional love and be sure they know that you are there to listen if they need to talk or need help." Beyond that, as Boykin suggested, it's best to not overstep your bounds.

"One way to help a friend who is in an unhealthy relationship is to be very direct and honest with him or her," Samantha Daniels, professional matchmaker and founder of The Dating Lounge dating app, tells Bustle. "Many people have friends who just tell them what they want to hear instead of what they need to hear. Your friend will value your opinion more if you are honest and tell them the truth about their relationship and give them some really helpful advice." Though it's still wise to avoid overstepping your bounds, if you have something you need to say, say it — gently, carefully and mindfully.

Editor's Note: If you or someone you know is in an abusive relationship and needs help, you can call The National Domestic Violence Hotline. It is open 24 hours a day.