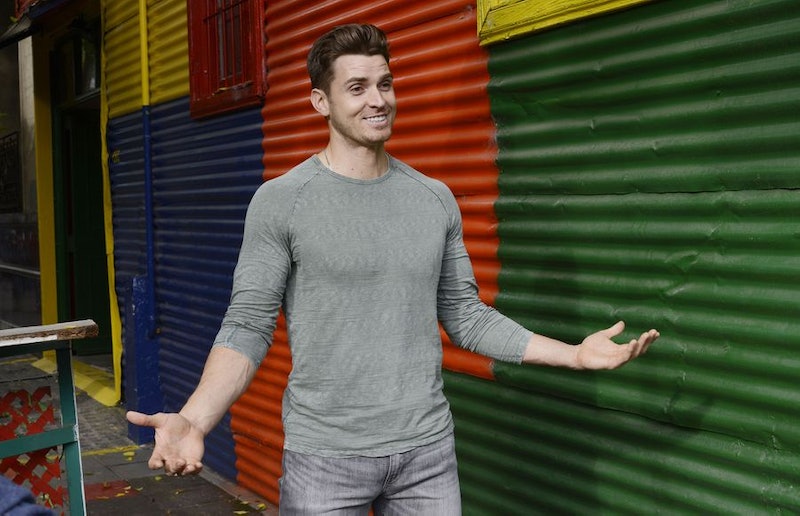 We're getting down to crunch time on The Bachelorette. That means that the time for making funny nicknames for some of the less-than-promising candidates is over, and the time for making serious predictions about the ultimate outcome of the season is here. It's increasingly been feeling like JoJo only has eyes for three of the guys left in the house: Robby, Jordan and Luke. Some might see them as equal, but I am convinced that Luke is the only proper match for JoJo. Don't believe me? I've got 13 reasons why Luke should win The Bachelorette.

You might not feel like you know Luke that well — he hasn't gotten a real spotlight in a little while since the dating drama with Robby and the wildly silly poker game debacle between Jordan and James Taylor, but that's the very reason why this guy, who's elegant, well spoken, and talented should be the clear standout for JoJo. Right now, this season feels like Jordan's to lose, which is pretty disheartening when I think about how clearly superior Luke is in so many ways. In the end, it's JoJo's decision (I just want her to be happy!), so I'll be OK with however it turns out, but I can't help but yearn for this pretty perfect coupling. Here's why.

No Bachelorette season is without its fair share of drama, but Luke has somehow managed to sidestep both the Chad debacle and this newly ignited Jordan fight while remaining at the forefront of JoJo's mind. That's no small feat, and shows an incredible about of maturity.

Sorry, but it has to be said — Luke and Jordan are the best-looking Bachelors left on the show. And while looks should never be a deciding factor, they certainly don't hurt.

Unlike Robby and Jordan, nothing in Luke's past has been uncovered that paints him as anything less than a super stand-up guy. Some of his past is tragic — including the loss of his best friend at war — but it seems unlikely Luke has any skeletons in his closet.

4. They Have Amazing Chemistry

Look, if you're going to build a lifetime with someone, it's pretty important you be attracted to them. And when it comes to Luke and JoJo, that attraction is off the charts. (JoJo has called their sexual chemistry "crazy.")

I feel shallow about this one, but tell me you weren't also a little short of breath watching Luke chop wood to power their hot tub during his and JoJo's first one-on-one. A little macho can go a long way.

6. He's Not Worried About Participating in Drama

Because Luke is so mature, the guy has made it clear he's on the show to meet and marry JoJo, not to become a reality star. It's hard to say as much about any of the other contestants.

7. He Can Serenade Her

8. They're Uber Cute Together

Be honest. If you saw Luke and JoJo walking down the street, you would definitely think to yourself, "wow, that is a hot looking couple." And you'd be right. (Not creepy, I promise.) Just look at them! Sizzling.

Since day one, Luke has been solely focused on JoJo. For Jordan, there have been distractions with Chad and James Taylor, and for Robby, his recently ended long-term relationship still seems to hang in the air (at least in my mind), but Luke hasn't succumbed to any of the pressures of the house or the other guys, and decided to focus solely on her instead. And, that's a very good sign indeed.

What is it about dudes that are good with kids that is so darn charming?

In fact, Luke is only a three hours' drive from JoJo's hometown, which means they were kind of meant to be. Plus, no one has to be so far from home once the wedding happens. (Which I'm sure it will, should she pick him.)

JoJo loves dogs so much, and it seems like more than a sign that Luke's charity of choice is canine related. A perfect match!

13. He Arrived On a Unicorn

That's cute on its own, but it's even more adorable when you think about the fact that JoJo arrived in a rubber unicorn mask (remember that?) last year. That means the guy did his research. It's trite at this point for the contestants to swear they wouldn't have done the show had a specific Bachelorette not been chosen, but in the case of Luke, it might actually be the case.

In short, Luke is the best of the bunch by far — I can only hope JoJo sees it before it's too late!