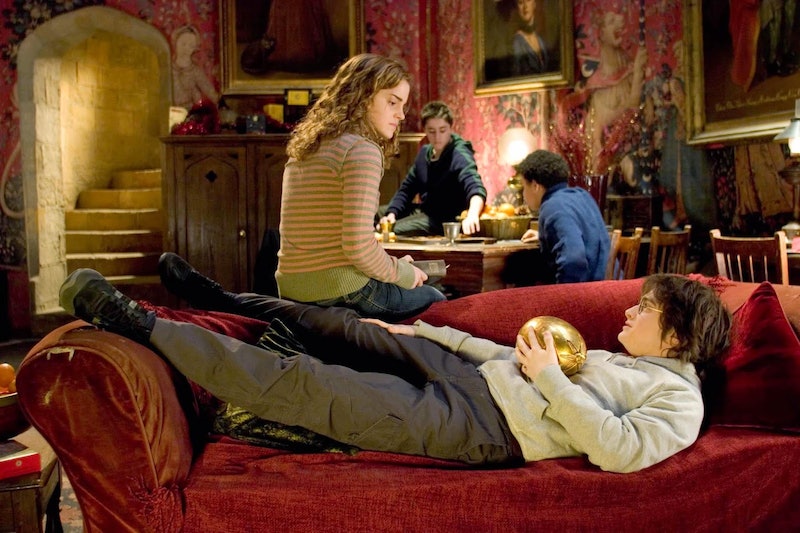 This morning, J.K. Rowling released all sorts of information on the North American Harry Potter-verse, including the story of the American Hogwarts, called Ilvermorny, and an Ilvermorny Sorting Quiz, which sorts people into brand new Houses. No doubt people are wondering as they take this quiz which Ilvermorny Houses match with Hogwarts Houses, but before we get into that, you should make sure you're up to speed with how Ilvermorny came to be in the first place. According to Rowling, Ilvermorny was established by Isolt Sayre, a young Irish girl and descendant of Slytherin who fled to America on the Mayflower. Throughout her journey she encounters many magical creatures, Muggles, and other witches and wizards, embarking on romance and adventure and fleeing the spite of her abusive, powerful aunt, a pureblood with elitist views.

It is through these adventures that Isolt forms the four Houses of Ilvermorny, which are each based off of an icon from Native American mythology. Unlike the Hogwarts Houses, the Ilvermorny Houses do not have nearly as distinct divisions in terms of personality or skills; in fact, many students in Ilvermorny are chosen for more than one House, and ultimately are tasked with making the decision themselves. That being said, you don't have to squint very hard to find clear parallels between the Ilvermorny Houses and the Hogwarts Houses, even based on the very little information on Ilvermony Sorting that we have.

The Horned Serpent Is Ravenclaw

Rowling describes the Horned Serpent as representative of the mind, and physically as a "great horned river serpent with a jewel set into its forehead". This might initially conjure images of Slytherin, but when you consider the origins of the Horned Serpent in mythology and the way Rowling ultimately writes the icon into the narrative, it is actually very far from its fellow snake.

In Native American mythology, the horned serpent is mystical figure often associated with rain, thunder and lightning, and water, and in some folklore their scales were used for divination and their horns for healing. It is most closely aligned with the element of water, which is representative of compassion, love, healing, and psychism. Within the Ilvermorny tale, the Horned Serpent serves as a guide to Isolt, helping her establish the first school by providing her cores for the first wands for teaching, providing the care and knowledge she needed to proceed. Isolt often dreamed of being a Ravenclaw at Hogwarts, and Rowling notes that Horned Serpent attracts scholars, so this seems to be confirmation that it is the Ravenclaw house equivalent — albeit a little gentler than its counterpart.

According to Rowling, Pukwudgie representative of the heart, and physically a "short, grey-faced, large-eared creature". Merely the use of the word "heart" conjures feelings of the most loyal and kind Hogwarts House, which is by far Slytherin; other bits from mythology and Rowling's text seem to support this parallel.

Pukwudgies originate from Wampanoag folklore, and are said to be two to three feet tall and have features that resemble humans, except larger and more exaggerated. Among its many powers is the ability to create fire at will. Seeing as fire is associated with passion, desire, energy, and protection, it seems fitting that, according to Rowling, this House attracts healers, and that she features an extremely loyal Pukwudgie character in her narrative — William, a seemingly reluctant friend of Isolt's who supposedly still remains at the school to this day looking after students and honoring her memory. In this sense, Rowling seems to have intended this to be a more passionate, blunt version of Hufflepuff, but certainly no less loyal than its predecessor.

In Rowling's interpretation, Thunderbirds are representative of the soul, and are creatures that "can create storms as they fly". The presence of a bird is somewhat reminiscent of Ravenclaw's eagle, and the description of its attributes may at first glance seem in line with Gryffindor, but a closer examination more likely puts this into an alteration of Slytherin.

The Thunderbird appears in a lot of Native American mythology, as a large bird with supernatural abilities of power and strength. While it has many different names in mythology, it is thought that its name originates from the beat of its wings causing thunder in the air. The element of air is most aligned with communication, travel, intelligence and freedom, all of which are associated with Slytherin House (even if most of the time they are only known for their ambition and cunning). The character responsible for choosing the Thunderbird as a house is described as "intelligent and temperamental," and Rowling also mentions that this house favors adventurers. It seems to me that this is a version of Slytherin with more emphasis on the power of knowledge rather than just power for power's sake.

According to Rowling, a Wampus is representative of the body, and is "a magical, panther-like creature that is fast, strong and almost impossible to kill". While its attributes are very similar in some ways to the Thunderbird, this seems in line with the idea that Slytherin and Gryffindor have always been, in some sense, two sides of the same coin. But further examination seems to support that this is the Gryffindor equivalent.

The Wampus cat, in Cherokee mythology, is a "fearsome variation of a cougar". In East Tennessee, legend associates the Wampus cat as a spirit of death and earth, and J.K. Rowling mentioned in an earlier Pottermore post that its hair is used in wand cores. As the element of earth is associated with prosperity, wealth, strength, and death, and the character who chose the Wampus House is described as "argumentative but fiercely loyal," it seems to indicate that this might be a Gryffindor.

That being said, I am willing to admit that there is a very real possibility that Thunderbirds are meant to be Gryffindor and Wampus is meant to be Slytherin, which is a testament to the uncomfortable parallels that have existed between Slytherin and Gryffindor House as presented to us the first time Harry ever donned the Sorting Hat. The truth is, at this point in the game, it's all up to interpretation — maybe Rowling didn't mean for the Houses to line up in the first place! But the similarities are enough that they are certainly noteworthy, regardless of her intentions.