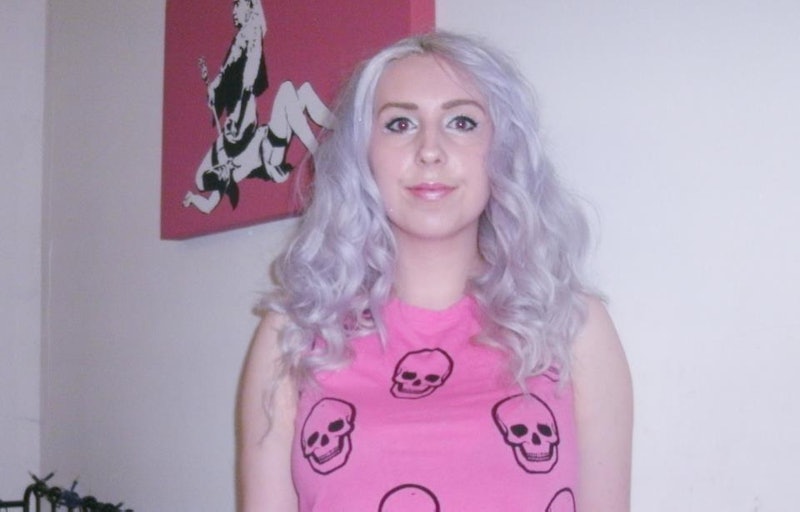 Although many of us may deem our mothers the "best mom ever," I mean it. As a weird teenager, she encouraged my experimentation on every level, style included. My mom knew the importance of self-expression for teenagers and I honestly believe that her liberal attitude towards my aesthetic choices led me to be the empowered, peculiar, and wonderful woman I am today. Sure, there were other factors to my development, like discovering feminism and getting a Tumblr account. But style-wise, I still hold my mom responsible — in the best way possible — for how well I now understand and adore the self-expression to be found in fashion.

It's possible that I appreciated my mom's attitude towards self-expression when growing up so much because of my peers, who, especially in a small home town, weren't afforded the same ability to wear whatever the hell they wanted. I was surrounded by teens who weren't allowed to dye their hair until they were 16; teens who weren't allowed any facial piercings until they were 18; teens whose creativity and self-expression were stifled at home and then stifled again in high school, where — in traditional British style — we were forced to wear uniforms. These weren't even quirky, St. Trinian's kinds of uniforms. They were just boring, ugly, bottle green Polo shirts.

Subcultures will often persist no matter what our parents' opinions are; and my era was that of the emo kid. Emo fashion and culture were a whole lot more than just studded belts and swept bangs: Emo was a sense of community, a sense of belonging, and again, a sense of self-expression. While perhaps not as political as other movements, like punk, there was still meaning there far beyond "style."

As much as we claimed, "This isn't a phase," it seems that it was. Rarely do you see emo adults, and there are far too few goth parents around for my liking. Such intense forms of self-expression through fashion aren't always as long-lasting as we might assume they will be at the time: A phenomenon that arguably symbolizes just how necessary they are during the period of youth. It's during this age that many of us, myself included, as so desperate for self-expression that it comes forth in exaggeratory, OTT bursts that just don't happen in adulthood.

Oftentimes, the lack of expression we were afforded at home or at school as not-adults-but not-children brought forth through kitschy and loud displays of studs and chains, and rightfully so. Without doing so, teenagers might be stifled further.

In my opinion, the damage of not allowing teenagers to express themselves freely is not only a risk for the teens themselves, but for the impact it can have on society. School uniforms and school dress codes don't often help teenagers learn, but rather stifle creativity — something arguably proven by Finnish schools being some of the highest-ranking in global education and having no uniform restrictions. Much has been written about how uniforms perpetuate sexism, the sexualization of youth, and rape culture. This isn't even a matter of self-expression, but sexism in its purest form: Sexism that isn't aimed at women, but at underage girls.

A hot summer day during which a teen girl isn't allowed to wear a tank top to school, or rock shorts to class, because her comfort is placed at less value than those around her ogling a body that may be "distracting" doesn't sit right with me. When a teenage girl is taught that her body is inherently sexual simply for exposing even the smallest amount of it, that's sexism. Even before we reach the age of Converse and crop tops, women's fashion and bodies are policed and attacked. Time and time again, we are conditioned to eschew self-expression in favor of "appropriate," school-sanctioned outfits.

The importance of self-expression through fashion as teenagers lies in reclamation, though. In a period when our bodies are changing, when the ways we are represented and treated by society are changing, and when our hormones are messing with our minds like they never have before, regaining some sense of control is crucial.

Sometimes (as I can attest to), the easiest way to do this is by punching piercings through our lips and wearing band T-shirts of music our moms don't like.

Today, I cannot help but wonder whether I be the same person if my mom hadn't taken me to get my lip pierced at age 14. Would I be the same person if she never let me dye my hair black at 12? What if she had never allowed me to wear solid black eyeshadow, or bright green skinny jeans, or the tiniest of tank tops? I'll never know, but I'm pretty certain I would not.

Through her liberal attitude regarding self-expression and the importance of personal style, I blossomed. I was deemed an outcast by those uninterested in goth or emo, and it empowered me to push my looks further. I expressed my dark mood through dark clothing, dark makeup, and dark hair, and I felt liberated. I could express those feelings in a way that others were not allowed to do so, or could not understand, and in a way that was totally my own yet simultaneously in the face of everyone who saw me.

And in the years since, not only do I continue to dress in ways that exasperate and excite my mom, but I preach the positive impacts of fashion far and wide.

In an ideal world, dress codes and school uniforms would be dropped immediately. In an ideal world, women wouldn't be sexualized or belittled as soon as they grow breasts. As for now, I can only promise any future youths who may enter my life that I will continually encourage and support their style choices. Even if I think they look dumb as hell.