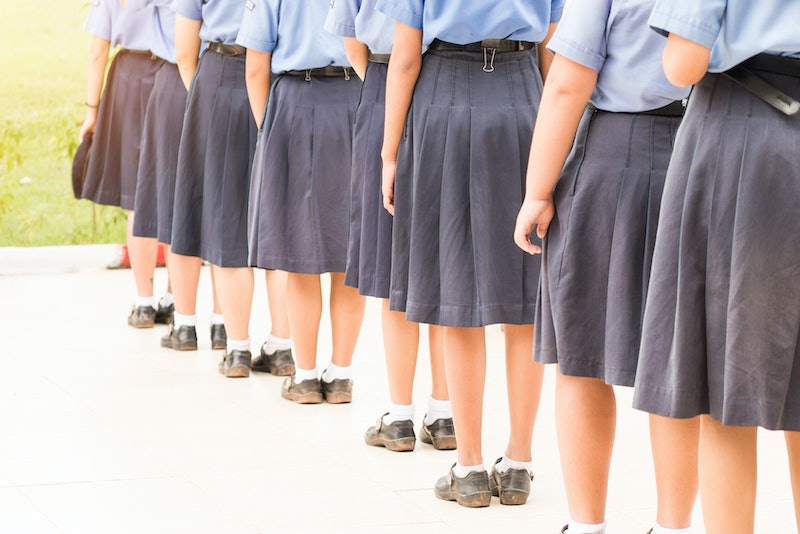 Recently, students have been calling out their schools for imposing unnecessarily strict dress codes. These rules are problematic not just because they can get kids (usually girls) sent home from school for no good reason, but also because dress codes perpetuate rape culture. By sexualizing their female students' bodies, schools teach students that a woman who doesn't dress conservatively enough is asking for attention, that it's not boys' fault if they give unwanted attention, and that a woman is defined by what she wears.

As a number of recent news stories make evident, the standards that high schools, middle schools, and even elementary schools impose on girls — and rarely on boys — have gotten pretty out of hand. In January, 17-year-old Amanda Durbin was allegedly made to walk and kneel to determine if her skirt's length was acceptable; Principal Tommy Hodges did not reply to Bustle's request for comment on the allegations at the time, but he said in an interview with Kentucky station WKBO, "As of a teacher's meeting Wednesday afternoon, we've told the teachers we need to be more consistent and we need to look at the dress code to make sure we're enforcing it." And in May of 2015, students at Biglerville High School in Pennsylvania were allegedly given a memo stating that "we don't want to be looking at 'sausage rolls'" at an upcoming graduation ceremony. In a statement following the memo going viral, the school district said that they "regret that the document contained some unfortunate word choices," while also stating that they "hope this does not distract from the dignity of the graduation ceremony and the accomplishments of our graduating class."

Kids aren't asking to go to school naked — they're just asking to be able to get up in the morning and get dressed without worrying about how many inches above the knee their skirt ends or whether or not their shirt exposes their collarbones. In short, they're trying to view themselves as students rather than objects. I don't think that's terribly demanding. But for administrations to ignore this request is incredibly damaging. When schools impose stricter standards on girls than boys, they really also do these five things that ultimately perpetuate rape culture.

As the above episode of "Flip the Script" demonstrates, the claim that imposing dress codes on girls is necessary hinges on the belief that boys will be distracted by violations of them — and they often aren't. In fact, parents, teachers, and administrators who enforce dress codes are often objectifying girls more than the boys they're supposedly protecting. By claiming that boys' minds will be filled with sexual thoughts if they see someone's shoulder blades, dress code advocates are contributing to the same stereotypes often used to excuse rape: that men are more visual and have sexual impulses they can't control. This is insulting to everyone, no matter which gender they identify as.

2. They Take Responsibility Off Boys

By policing how girls dress in attempt to divert boys' attention from them, schools are holding girls responsible for how boys view them and even how they do in school. When schools talk about how "distracting" girls' outfits are, they're absolving boys of responsibility for doing their duties as a student regardless of their surroundings. The image above, taken from a seminary, takes this victim-blaming a step further by holding women responsible for unwanted touching they might experience at school. The presentation advises women from a man's perspective that "whatever you show me, I'll think I can touch — so if you don't want that, then don't show me much." (Yup, it's a poem encouraging rape culture.) The implication is that if a man looks at, speaks to, or touches a woman in an inappropriate way, it's not his fault — he's just acting according to his nature.

3. They Blame Victims Of Harassment

Since they're not putting the blame on boys, guess who schools with strict dress codes are blaming for sexual harassment? As usual, the girls. According to a believe system in which it's in men's nature to objectify women, wearing a low-cut shirt is the equivalent of dangling a piece of meat in front of a dog (because, under this system, women are pieces of meat). Claiming that a woman's body is by nature "distracting" implies that it's her fault if she "allows" someone else to be distracted by it.

While portraying boys as voracious sexual beasts, dress code supporters advocate a view of girls as objects who couldn't possibly have their own sexual desires, but rather have to field men's. Under this logic, a woman who violates a dress code chose her outfit for male attention, not for the sake of wearing what she likes or is most comfortable in. She's supposedly not protecting her "purity," which means she doesn't respect herself, which means it's OK to objectify her. None of that is actually OK, though — something which should go without saying, but which unfortunately does not.

5. They Teach Girls To Obsess Over Their Looks

Any form of policing women's clothing perpetuates the idea that a woman's appearance reflects upon her personality or character, which it doesn't. Women in our culture are already taught that their looks are the most important thing about them, so it's difficult for a woman to get up in the morning and not obsess over what she's wearing. Let's not make that task any harder by forcing girls to think about something that actually has no bearing on their education or their classmates' and furthers their objectification.

More like this
How To Fight For Reproductive Rights, Based On How Much Time You Have
By Courtney Young
Sandra Bullock, Girlboss Extraordinaire
By Matt Harkins & Viviana Olen
Yomi Adegoke On The Offline Diaries & The Power Of Representation
By Jessica Morgan
The 'Hocus Pocus' Sequel Finally Has A Release Date & It Makes Total Sense
By Shannon Barbour and Radhika Menon
Get Even More From Bustle — Sign Up For The Newsletter