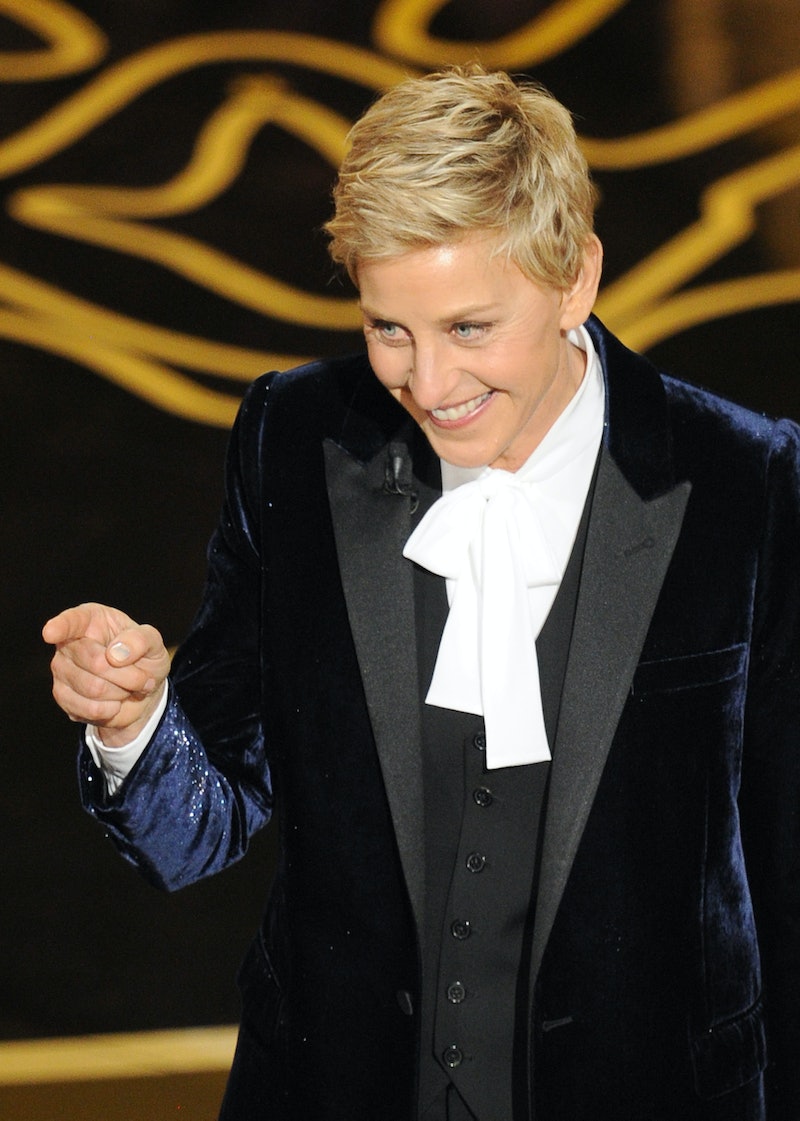 Sometimes, the world really does make sense and Ellen DeGeneres' (almost) perfect, succinct 2014 Oscars opening monologue proved that completely, because of course it did. Unlike Seth MacFarlane before her, who opted for a ridiculously embarrassing song and dance about boobs (because apparently there was nothing else he could possibly have touched upon with 10 Best Picture nominees), DeGeneres knocked it out of the park— er, auditorium.

Of course, that doesn't mean anyone was safe from her loving jibes. Dressed in a sparkly velvet blazer and an old timey neck tie, DeGeneres made her way around the room, making time for some of the lesser known actors in the room instead of just focusing on the Meryls and the Leos. She teased Nebraska's June Squibb for being one of the oldest nominees. "I'm telling them how old you are!" she playfully shouted at the good-natured actress. She moved onto first-time nominee Barkhad Abdi (Captain Phillips), adorably (and falsely) confusing his Somalia origins for being a wine somalier — "Who's the wine captain now?" she asked while Abdi gleefully cheered her on.

But what would an awards show opener be without at a few high-profile burns? DeGeneres did hit Liza Minielli pretty hard — who was stunning with her daring blue streak in hair — saying, "good job, sir" and calling her a Liza impersonator. That went a bit far, but she recovered and went on to call out Amy Adams for not going to college, while Adams bashfully smiled in her direction. She grilled Queen Jennifer Lawrence adorably for falling last year at the Oscars and again on the red carpet this year — of course, being the slice of perfection she is, she took it all in infectious stride. It was clear that like Tina Fey and Amy Poehler at the Globes, DeGeneres was the perfect person to host such a classic — and let's be honest, often totally boring event.

There's no real standout moment — though her speech's kicker about 12 Years a Slave winning the Oscar, or the Oscars revealing themselves to be racist was certainly a cheeky little shocker — but that's exactly what the Oscars needed. For years, we've been chasing spectacle from MacFarlane's shameful song and dance to Anne Hathaway and James Franco's accidental performance art, but all along, the best option was to put an incomparably delightful, lovable human on stage and let her do what she does best: be absolutely amazing.