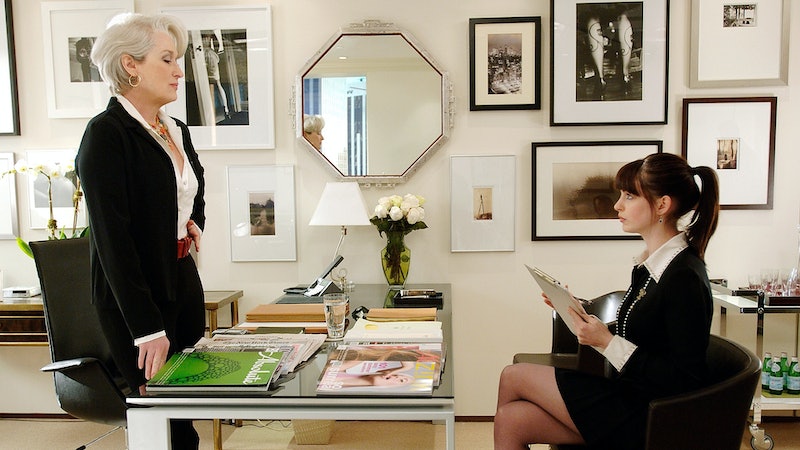 A decade later, author Lauren Weisberger is still grateful for the welcome and the access granted to her during the film adaptation of her first novel, The Devil Wears Prada , the movie version of which turns 10 this year. Still, the author tells Bustle that she is retroactively relieved she didn't have a say in casting. "I remember when they said, 'Meryl [Streep] is interested,' and I remember thinking, 'she is so amazing, but I can't envision it," Weisberger recalls. Yet Streep would go on to earn glowing reviews as the silver-haired, acid-tongued antagonist Miranda Priestly, not to mention her 14th Oscar nomination. "How's that for great vision?" Weisberger says now, with a laugh. "All you had to do was see her on set one day and it became crystal clear."

Strangely, Weisberger's memories of her face-time with the two leading ladies of the film reveal a few parallels to the characters they play. (Minus the yelling and the ruthless sarcasm, of course.) The author says that Streep was "all-business" on set, as befitting an actor of her resume. "Very friendly, but it was professional," Weisberger recalls. Meanwhile, Anne Hathaway was just 21 when the film was released, fresh off of her breakout in Disney's The Princess Diaries. Weisberger says the star took a more active, inquisitive tack for her preparations. "She asked a million questions and was so interested to know what it was really like," the author says, alluding to her own assistantship to notoriously exacting Vogue editor Anna Wintour, from which she drew inspiration for her book. "[Hathaway] did an internship. She sort of went in there and acted as an assistant for a few weeks. They put her through the wringer."

Thanks largely to its actors' commitment to their roles, The Devil Wears Prada became a massive success, and interest in the book, published three years earlier, peaked. The loosely autobiographical and witty tale of a put-upon assistant running herself ragged for a powerful fashion magazine editor spent half a year on The New York Times Bestseller List and spoke to anyone who's ever been employed in a thankless, entry-level job. Today, Weisberger paraphrases the near-universal appeal of this coming-of-age story. "You may be doing whatever everyone else around you is doing, and you're not happy," Weisberger says. "Why is that, and how do you fix it?"

Though much of the caustic comedy of the film and the book comes from aspiring journalist Andy Sachs (Hathaway) butting heads with her demanding and cold boss, Runway editor Miranda Priestly, Weisberger finds that the real conflict for the heroine is an internal one. "Is this right for me? Is this what I want my life to look like? I'm interested in this struggle that I think all women have, especially younger women," the author explains.

Weisberger, whose sixth novel The Singles Game hits shelves on July 12, was just 25 when Prada took off. What happened next was a whirlwind for a first-time novelist, not unlike a Cinderella story that one of her starry-eyed but conflicted protagonists might experience. Fortunately, this big anniversary of The Devil Wears Prada film is a joyful memory for Weisberger. She is quick to note that she knows many authors probably aren't afforded the same magical adaptation experience that she was. "I just feel like I got so lucky," Weisberger says. "The team on this was incredible. I had great relationships with the director, the producer, the screenwriter, the actors. They didn't have to include me at all, but they were so open and inclusive and I was on set all the time." She even flew with the production to France for those couture-dominated Paris scenes and to international festivals and premieres.

Fortunately for her, Weisberger's homework for her new book was not quite as tedious as Hathaway's for Prada. The lead character of The Singles Game is Charlie Silver, a ranked tennis player who could be the best... if she's willing to make some sacrifices. As a "lifelong fan" and recreational player, Weisberger says she relished the chance to tag along on the women's tour for a while. "I spoke to tournament directors, Women's Tennis Association officials, players, former players, hitting partners who'd worked with Serena Williams..." Weisberger recalls. "It was really, really fun to research. I'm sitting at Wimbledon, eating strawberries and cream, and I'm working."

Pre-Singles Game, Weisberger returned to the high-pressure world of magazine publishing for a Prada sequel. It's been an entire decade since Miranda last dismissed Andy with a flick of her wrist on screen; is it possible that a film version of Revenge Wears Prada could bring Hathaway, Streep, Emily Blunt, and the rest of the Runway gang back together? "I can't think of anything that would be better," Weisberger says. "But it's more like a 'wait and see...'"

Waiting and seeing isn't a problem for the author, who always finds the humor and emotion in the journey.

More like this
At 28, Minnie Driver’s Personal Life Was “Falling Apart”
By Kate Dwyer
10 Must-Read New Books Out This Week
By K.W. Colyard
'Bridgerton' Star Nicola Coughlan Confirms Season 3 Will Focus On Colin & Penelope
By Grace Wehniainen and Alyssa Lapid
The Time Traveler’s Wife Book Has A Heartbreaking Ending
By K.W. Colyard
Get Even More From Bustle — Sign Up For The Newsletter