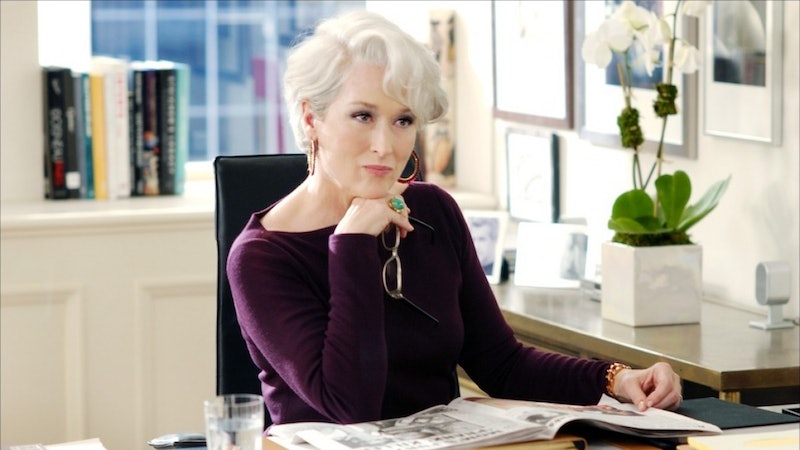 In 2006, Anne Hathaway and Meryl Streep faced off against a high-fashion backdrop in a comedy adapted from a best-selling novel. The Devil Wears Prada earned Streep another Lead Actress Oscar nomination and grossed almost $125 million domestically. Both the novel (which came out in 2003) and the movie hit on real frustrations that early '00s college graduates were experiencing as they endeavored (sometimes fruitlessly) to take the world by storm. Welcome to the workforce, where internships and entry-level jobs can involve long hours, menial tasks instead of constructive experience, and low-pay, if any at all. Hathaway's character Andy Sachs is the audience stand-in in The Devil Wears Prada. Streep is the cruel, fire-breathing boss. I love Streep's aloof performance in this movie, but there's one thing that's always bothered me about The Devil Wears Prada: Miranda Priestly isn't a villain. She's just a high-powered woman doing her job.

The Devil Wears Prada celebrates its 10th anniversary this year, so here's a quick plot breakdown to refresh your memory. Andy is a Northwestern University alum who doesn't know the difference between Pucci and Prada but takes a job at renowned fashion publication Runway anyway. As a junior assistant to the editor-in-chief, Andy is at Miranda's constant beck-and-call. It affects her relationship with her friends and boyfriend Nate (Adrian Grenier), especially when she begins to get more comfortable with the culture of the magazine and with Miranda, who has shown some sliver of vulnerability. When Andy finds out about a plot to oust Miranda and warns her, Miranda sacrifices her loyal art director to stay in power. Then Andy quits Runway and leaves the fashion world behind, apparently feeling pretty self-righteous about it.

I'm a Millennial like Andy, and I think it's remarkably unfair that our generation is considered by some to be lazy and entitled. I've x-ed out of countless job postings offering to pay "in experience" or ambiguous perks instead of with cash. (Free bagels once a week is nice; health insurance is better.) But Andy seems to be paid quite well in The Devil Wears Prada. She has access to people, institutions, and couture that would make an aspiring fashion journalist weep with envy. It's not the fault of her employer or her coworkers that Andy isn't interested in this industry. Jobs like these, which require entry-level arrivals to "pay their dues," are best tackled with passion and drive. Andy has no passion for her work. She waltzes into Runway loaded down by bias towards the kind of people who work there and the kind of people who read the final product. When she begins to empathize with the high-maintenance airheads she's written off, her friends accuse her of selling out. You see, Andy is a good, authentic person because she doesn't care about what's in season. At least that's the movie's message.

So opposite Andy, you have Miranda. It's an open secret that Miranda is partially based on Vogue editor-in-chief Anna Wintour. The novel's author Lauren Weisberger once worked as her assistant. Wintour is massively influential and at the top of her profession. Those are goals that Miranda Priestly shares. It's frustrating to Andy and to the audience that Miranda puts no effort into being "likable." It's simply not a quality she aspires to.

And why should she? Miranda Priestly is remembered as a villain precisely because she is a demanding woman who refuses to change her demeanor to make other people comfortable. How many male boss characters in film have exhibited similar personality traits? How many times have I typed "sorry" in a work email and then deleted it when I remembered that I don't automatically have to apologize to colleagues when I ask them for some information related to our jobs? Also, Miranda cares about things that Andy finds frivolous, and I live for the moments in the movie where she reminds her assistant that Runway has the ability to make or break designers and that her own endorsement of trends trickles all the way down to mass-market production.

Granted, Miranda's betrayal of Nigel is pretty uncool. But I fully believe that she is judged more harshly for her me-first actions than any dude character would ever be. Miranda Priestly isn't so much a bad guy. She's more of a girl boss role model.