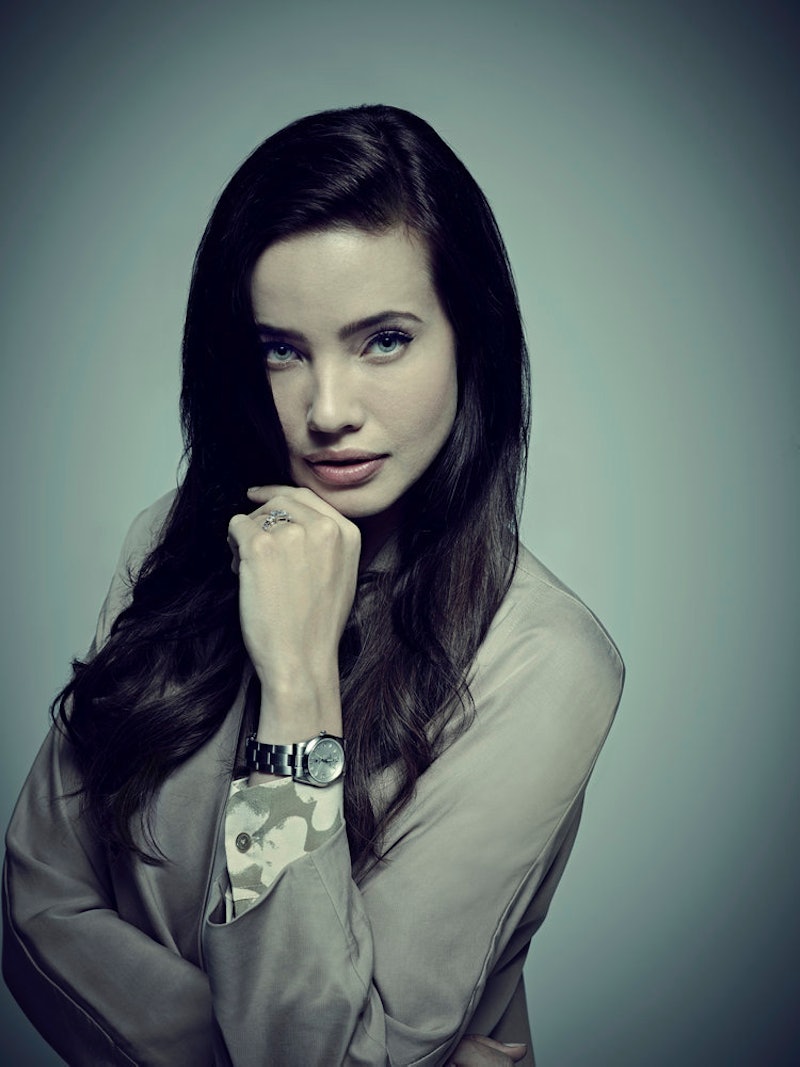 For someone who's so antisocial, Elliot Alderson is actually very good at reading people. The protagonist of USA's Mr. Robot is an expert at figuring out what people want and using that to manipulate them; except when it comes to icy villainess Joanna Wellick. Their one scene together in the Season 1 finale was perhaps the most frightened we've ever seen our hero — and he should be very scared heading into the drama's sophomore year, since portrayer Stephanie Corneliussen has been promoted from recurring player to full-fledged series regular for Mr. Robot Season 2, which premieres on Wednesday, July 13.

In her husband Tyrell's mysterious absence, Joanna will emerge as one of the show's biggest villains. But what is it about her that so unnerves the typically unflappable Elliot? "It's so funny, Rami and I were talking about that not very long ago," Corneliussen tells Bustle. "It just flew out of my mouth, I went, ‘You're a great player. But I'm the coach.' … She's mentally unstable too, in some senses," the actress says, referring to Joanna as "borderline sociopathic." But unlike Elliot, "she also has self-awareness and such self-control. I think that when you reach a state of that kind of self-awareness, you can really project into other people's heads."

According to Corneliussen, Elliot made a fatal mistake in his encounter with Joanna when he lied to her about Tyrell. "He kind of hands her a trump card," she says. "She knows immediately that he's lying and she takes that as weakness. She goes, 'You're scared of me. I'm going to make you really scared of me now.'" (Spoiler alert: it worked, and not just on Elliot.)

The 29-year-old Danish actress teases that, in Season 2, Joanna will "do just about anything to get an answer" to the mystery of what happened to her missing husband. Even though her last interaction with Tyrell involved threatening to cut him out of her life, Corneliussen believes that the threat was merely "motivation." "Joanna is very tactical," she explains. "If she sees that one certain agenda isn't moving her closer to the target, to whatever objective she has, she'll switch, she'll use a new one. And there's a switch in Joanna when she has the baby. Her entire objective becomes family."

But despite her threats, Corneliussen insists that Joanna and Tyrell are "soulmates. They are just so perfect for each other," she says. "I certainly don't think that they're manipulating each other. I think that they understand each other and they push each other and they know, as a union, as a team, what weaknesses and what strengths the other provides. In his absence, Joanna feels like she lost part of herself. He's the love of her life, so not knowing where he is, not knowing what's going on, is devastating to her."

(So where is Tyrell? Unfortunately, Corneliussen can't say. "And with good reason, because I don't know!" she claims.)

Joanna's increased presence on Mr. Robot means viewers will learn more about the ice queen's backstory — including her first child she gave up for adoption. "We get a little better idea of where Joanna comes from in Season 2," Corneliussen promises. "There are little subtle hints of what kind of lifestyle she comes from, what kind of life she lived before Tyrell. She comes from a certain family where teen pregnancy certainly isn't accepted. It wasn't her decision to give up the baby, and obviously this is something that has been tormenting her; but at the same time, she's a master of shutting down emotions."

For those afraid that maternity will soften Joanna's razor-sharp edges, Corneliussen teases that it will only make her stronger: "Her maternal instinct kicks in, and she becomes a roaring lion mom. Nothing is going to touch this baby."

The most common literary comparison made when discussing Tyrell and Joanna Wellick is undoubtedly Macbeth and Lady Macbeth — but does that mean Mr. Robot's villainous couple is doomed? Or will they somehow be able to avoid the Macbeths' tragic fates? "If anyone was to jump out of a window…" Corneliussen begins, referencing Lady Macbeth's suicide. "I don't see Joanna breaking down, and I don't see Tyrell breaking down. No. I think that, if they make it through, then I think everyone else should worry more than [Tyrell and Joanna] should… because they can be incredibly dangerous."