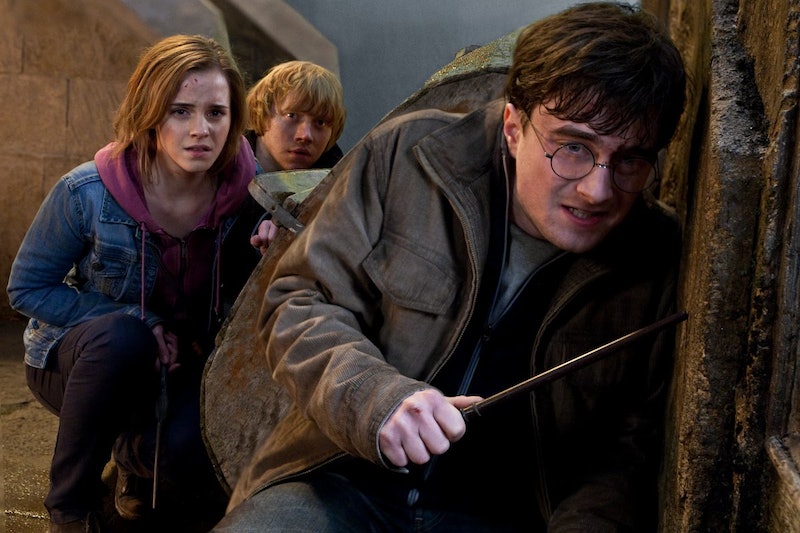 With over one million words in the Harry Potter series, I wanted the film versions to be as long as possible to keep every magical detail of J.K. Rowling's world intact. Yet, the only Harry Potter book to be split into two movies was Harry Potter and the Deathly Hallows . After years of disappointing running times for the lengthy (but quick reading!) Harry Potter books, Warner Bros. finally had accepted that Rowling's words were deserving of more screen time to accurately tell the end of her story. However, the joy of Harry Potter and the Deathly Hallows getting two movies quickly turned to disappointment since it marked the beginning of the horrifying trend that exists today: Adapting the final book of a series into multiple movies — even when the book is not deserving of such an honor.

I wanted epic-length films for every Harry Potter book since The Lord of the Rings trilogy was proving at the same time as the first three Harry Potter movies that people were willing to sit in a movie theater for three hours or more for great storytelling. The argument that longer films would challenge children's attention spans too much never sat right with me — and Harry Potter himself, Daniel Radcliffe, agreed. As he told USA Today, "The tendency is to think kids have a very short attention span. But if you find something that can engage them, they are the most ferocious followers."

Yet, no Harry Potter film ever strayed far from the standard two-and-a-half hour run time. Considering most of the children watching Harry Potter had already read Harry Potter, the filmmakers keeping each movie under three hours was underestimating film goers. If a person of any age can sit and read a 257,045-paged book like the brooding and fantastic Harry Potter and the Order of the Phoenix, I'm pretty sure that person could also sit and watch 200 minutes of the story onscreen, rather than the measly and simplified 138 minutes we received.

While Harry Potter and the Deathly Hallows isn't the longest Harry Potter book in the franchise, there was a lot of ground to cover. As Harry Potter producer David Barron told the Guardian:

When we came to adapt Deathly Hallows, we thought: "Well, the DNA is one book to one film," so we sent Steve [Kloves] away to adapt it. He rang after a few weeks and said: "I can't get this into one movie unless you want it to be four or five hours long." I don't suppose Warner Bros was unhappy about getting two films. Steve even said: "You know what? If you really wanted to push this, you could get three films out of it."

The idea of Warner Bros. not being "unhappy" about getting more films out of the lucrative franchise is what most likely has fueled this new phenomenon that the last movie adaptation of a successful book series needs to be milked for all its worth — even when the content does not warrant two feature-length films. And the first franchise to follow in Harry Potter's footsteps proves my point that not every book has enough substance to sustain two films since Twilight was the series that immediately jumped on this two films bandwagon.

The Twilight Saga: Breaking Dawn had no right being broken into two movies considering that the second movie had to fabricate an entire battle scene that wasn't in the books to fill the time. To be fair, the fake battle was far more exciting than what had happened in the book, so it did make for a more amusing movie experience. However, the movie that really suffered from the book being split into two was The Twilight Saga: Breaking Dawn – Part 1 since there was not enough content to justify the first movie standing on its own. Despite the hefty weight and word count of Breaking Dawn , Stephanie Myers' world was never as robust as Rowling's, so the final book could have been — and should have been — only one film.

On the opposite side of the spectrum from Twilight, you have the very intricate world of J. R. R. Tolkien. While Peter Jackson somehow managed to make each book of The Lord of the Rings into just one excellent movie each, the single book The Hobbit was shamelessly adapted into three films. Considering The Hobbit book is shorter than any of The Lord of the Rings books, how could I not view The Hobbit film franchise as a money grab inspired by the success of Harry Potter and the previous Tolkien film adaptations? Yes, Jackson added Tolkien's appendices to the newer films, but The Hobbit should have been only one film considering how much had to be changed from Tolkien's original stories and how much was completely made up — like Evangeline Lily's character Tauriel — to create three movies. Not to mention, they all seemed to drag on far too long.

For the young adult book franchise The Hunger Games, the third book Mockingjay is actually shorter than the second book Catching Fire by over 1,000 words. But yet again, the last book was divided into two films. As a person who excitedly went to the theater at midnight with a miniature bow and arrow to see the first Hunger Games movie (as a grown woman, I might add), the extra movie completely broke my Peeta-loving heart. I was so finished with the movie adaptation of Suzanne Collins' books that after seeing the first three movies in theaters, I still haven't even bothered to see The Hunger Games: Mockingjay – Part Two. It's called fatigue, Hollywood, and I'm as tired as Katniss Everdeen at the end of Collins' books.

The last, and most recent, book adaptation to be guilty of the two-movie treatment is The Divergent book series. The filmmakers behind Veronica Roth's book series went so far as to not only divide the third book into two movies, but to create a new name for the fourth movie instead of going with the traditional "Part 2" slapped onto the end of the title. The fourth movie is called The Divergent Series: Ascendant, which is not a title from Roth's original book series. The author was cautiously optimistic about the name change on Tumblr when it was announced in September 2015, but I see this as another example of prolonging a film series beyond its time. At least I can say that Allegiant is the longest book in the series, but considering how poorly the first movie version of the third book did with critics (only an abysmal 13 percent rating on Rotten Tomatoes!), there was no reason to extend this series beyond three movies.

I have the Harry Potter film franchise to thank for a lot of things (not as many things as I have to thank the book franchise for, but still). However, it's with a heavy heart that while I thought Harry Potter and the Deathly Hallows – Part Two wrapped up the movie franchise excellently, the filmmakers created a monster by splitting the last book into two films — and it's not a monster that can be defeated with a wand and a spell. Yet, there is hope on the horizon since the director behind The Maze Runner franchise, Wes Ball, told Digital Spy that he has no plans to adapt James Dashner's final book into two movies, saying, "I think three is the number; beginning, middle, end, that's it. Four? I think there's something off about four."

While I wish all filmmakers would use the same logic as Ball, I know that Hollywood is a long way from accepting the fact that yes, there can be too much of a good thing. And unfortunately, Harry Potter is next in line to inundate fans with too many films. With Warner Bros. latest Harry Potter-inspired series Fantastic Beasts and Where To Find Them , I have a sinking feeling that with three movies, the Harry Potter spin-off just may overload fans with too much magic. But since those movies are penned by the creator of Harry's world herself, maybe — just maybe, I can find the strength within myself to watch as many movies as the genius behind Hogwarts is willing to bestow upon me and the rest of the millions of Harry Potter fans out there in the Muggle world.

So bring on all the Harry Potter movies, Hollywood! Just knock it off with all the extra films based on books first.

More like this
I've Read The Harry Potter Books 30+ Times & This Plot Hole Haunts Me
By Kelsey Stiegman
'The Simpsons' Will *Finally* Address How They “Predict The Future”
By Sam Ramsden
The 'PLL: Original Sin' Creators Say A’s Identity Will Be “Very Clear” By The Season Finale
By Alyssa Lapid
'The Sandman’s Ending Is A Departure From Neil Gaiman’s Comic Book Series
By Kadin Burnett
Get Even More From Bustle — Sign Up For The Newsletter