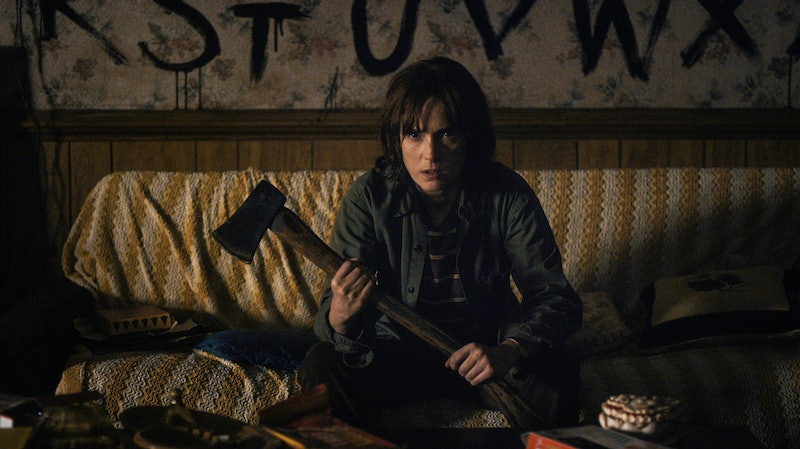 It's been seven years since Winona Ryder played Spock's ill-fated mom in the Star Trek reboot, but I somehow still can't get over the idea of the Beetlejuice star playing somebody's parent. But, I guess I'll have to, since Ryder will be playing the mother of a missing child in the new Netflix drama Stranger Things … and based on the new trailer released this Thursday, Ryder's presence won't be the only thing giving us major '80s nostalgia when we inevitably binge-watch all eight episodes when they premiere on Friday, July 15.

Those watching the Stranger Things trailer for the first time might find themselves a bit confused: what exactly is this show supposed to be? Is it horror? Fantasy? Sci-fi? There seem to be elements of all three genres — and more — in the span of this two-minute promo. According to Ryder in an interview with Time, co-creators Matt and Ross Duffer "really wanted to make this this love letter to the movies they watched when they were growing up. They’re in their mid-30s, so they grew up with these films like Stand by Me, E.T. and Close Encounters." Taking place in 1983, Stranger Things will capitalize on people's fondness for that bygone era. "Nostalgia is a thing now," as Ryder succinctly put it.

From the trailer's initial focus on a group of young kids enjoying a nerdy board game, the promo purposefully evokes the tone and images of that era — especially the aforementioned E.T. and other films from Steven Spielberg's production company, Amblin Entertainment. The 19 films that Amblin released during that decade trafficked in all of the genres on display here, from horror (Gremlins) to sci-fi (Back To The Future), from adventure (Young Sherlock Holmes) to fantasy (Who Framed Roger Rabbit), and especially coming-of-age (The Goonies).

You may find yourself flashing back to your youth while catching glimpses of children riding their bikes through the night-darkened streets, government officials in white hazmat suits, figures running through a green pine forest, plenty of flickering lights, unexplained phenomena… not to mention the distinctive fashion of the period and the half-playful, half-haunting soundtrack.

So what is Stranger Things actually about? That's a great question — the true answer to which won't be revealed until we can stream the series next month. For now, the project remains shrouded in a level of secrecy highly reminiscent of Amblin Entertainment's more recent collaboration with J.J. Abrams, the 2011 monster movie Super 8. All that we know so far comes from Netflix's vague official synopsis, which tells us that the show takes place in Indiana, "where a young boy vanishes into thin air. As friends, family and local police search for answers, they are drawn into an extraordinary mystery involving top-secret government experiments, terrifying supernatural forces and one very strange little girl."

Will Winona Ryder find her missing son? Will the "strange little girl" escape the clutches of the evil government organization? Will somebody's bike fly picturesquely across the glowing full moon? (Hey… stranger things have happened, amiright?) We'll find out when Netflix unveils their most recent marathon-worthy show on July 15.