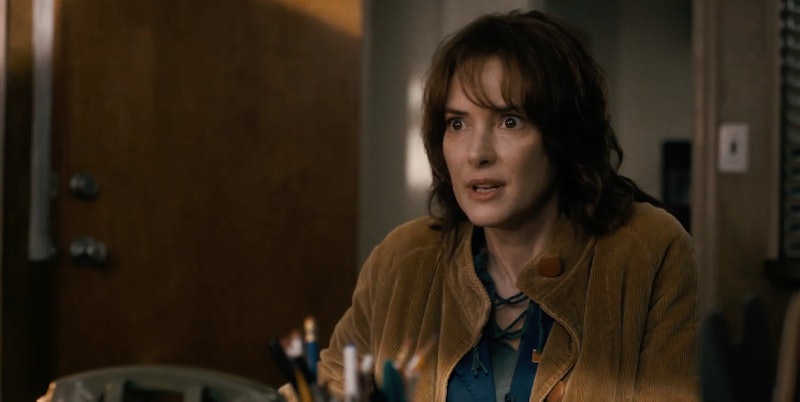 We've come to expect a history of creepiness (or at least eccentricity) from '90s "It" girl Winona Ryder, and it looks like she's keeping it creepy all the way into 2016. The trailer for Ryder's new Netflix series Stranger Things was released Friday, and the title certainly delivers: you're not going to get a good night sleep from all those nosebleeds and shadowy figures. That said, the series is shrouded in, above all, mystery, and this glimpse only has me wondering what's going on in the trailer for Stranger Things ?

What we know so far is that Stranger Things takes place in the sleepy, fictional town of Hawkins, Indiana in the '80s, a place where nothing goes wrong aside from the occasional owl attack (seriously). Then a young boy, Will, disappears and his mother (played by Ryder) is left trying to pick up the pieces. Although Ryder's character is assured that "99 out of 100 times a kid goes missing, the kid is with a parent or relative," the trailer definitely insinuates that this not the resolution. And sure enough, unraveling this case leads to the discovery that not everything is all sunshine, daisies, and owl attacks.

It all sounds like a A+ David Lynch drama, doesn't it?

So who... or what... actually took Ryder's son? Clearly we're supposed to watch the show and find out, but we have a few clues to what may be going on.

Allow me to pull a History Channel and suggest the obvious first: aliens. If the show wants to be lazy (I doubt it), then this could be a clear cut case of extraterrestrial abduction. The whirring sound at the halfway mark sort of gives off that vibe, the boys on bikes have this weird E.T. throwback, and who's to say that the boy who returned in Will's place isn't from another planet? Or, as that boy seems to have a serial number imprinted on his wrist ("011"), perhaps he's a former abductee who escaped their clutches, providing a vague whisper of information on what might be happening to this lost child. He alleges that Will is "hiding." From who? Or, again, from what?

This theory is lightly supported by the passing scenes of civilians in hazmat suits. What have they found? Is it some kind of Roswell experimentation chamber?

Another guess, less likely in my opinion, is that the town is possessed by a bevy of evil spirits who have taken Will hostage as some kind of weird revenge. Basically a poltergeist situation. This could explain why all the doors are unlocking on their own, and there's all sorts of technological manipulation. And maybe, just maybe, the unnamed boy is from sort of spirit world... but this all seems a bit too simplistic.

A final, much more convoluted thought is that Will is somehow "special," maybe gifted with telekinetic powers, maybe an alien himself (although you'd think his mother would be aware of that). Perhaps he's being abducted by supernatural forces who think they can protect him from the Hawkins underbelly, which may do experimentation on beings like him. As these supernatural forces are riled up, it starts to mess with the stability of the town (again, the tampered lights, the nose bleeds). Or, perhaps this kid is unremarkable and just discovered said forces. The voiceover lends one more possible clue to his abduction: "Maybe Will saw something that he shouldn't have."

So again, very Lynchian all around, and I'm sure this is something we're going to be pondering hard throughout the course of the series instead of, you know, solving it within the two-minute long trailer. But if you want to have a go at the show's mystery, watch the sneak peak below, and keep your eye out for Stranger Things' Netflix debut July 15.