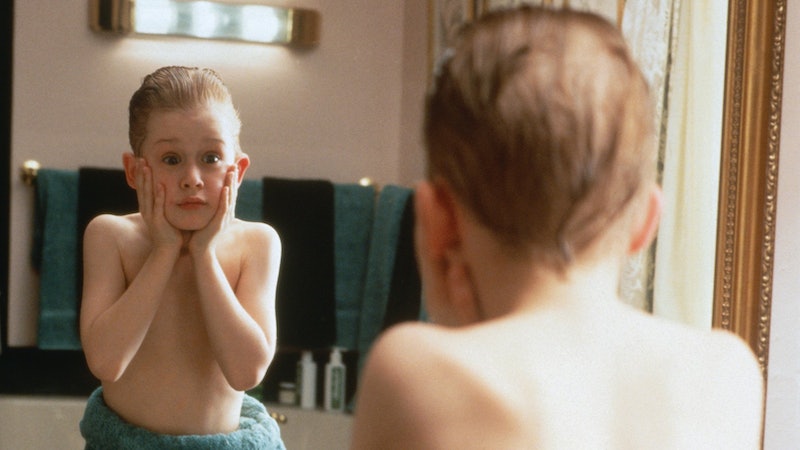 Home Alone is one of the most treasured Christmas movies of all time. The family flick is remembered primarily for the antics of its protagonist, Kevin McCallister, played by Macaulay Culkin. Any '90s kid can tell you about the elaborate booby traps that Kevin used to outsmart two sleazy home invaders, or about his iconic scream after putting on aftershave. But what no one seems to remember is that Kevin from Home Alone was actually really freakin' annoying.

I realize that I sound like a total Grinch, but seriously, this kid was such a handful. Kevin was self-involved, ungrateful, rude, irresponsible, and possibly even sociopathic. We're talking about a kid who wished his family would disappear, then was thrilled when he thought that his wish had come true — until it was inconvenient for him. And then, when presented with a dangerous situation, instead of calling the police, he concocted some eerily creative booby traps to physically harm the people who were threatening him. Yes, I understand that the character was a small child, and small children can't be expected to conduct themselves well in every given situation. And, yes, Kevin's extreme behavior was also provoked by the circumstances. But the point remains, this kid was the worst. If you don't believe me, let's take a look at some of the facts.

1. He Was Totally Unappreciative

Kevin had a beautiful house, a big family, and was about to go on an amazing trip to Paris. But all he could focus on was himself.

It always broke my heart to see Catherine O'Hara's reaction to her son saying he never wanted to see her again.

3. He Was A Little Too Happy When His Family Disappeared

Don't you think that if you woke up and discovered that a dozen of your family members were suddenly missing, you would be a bit concerned? Not this kid.

4. He Destroyed His House

After realizing his family was gone, Kevin's next move was to jump on all the beds, go through his brother's belongings, raid the fridge for junk food, and sled down the stairs.

And the screaming that went with it.

6. He Was Super Judgmental

He accused hit little cousin of bedwetting, assumed that his neighbor was a murderer, and had this reaction to a picture of his brother's girlfriend. Rude.

7. He Was Pretty Violent

Kevin lied to every person he met in order to keep them from discovering that he wasn't under adult supervision.

9. He Didn't Learn From His Mistakes

The next year, Kevin once again wished away his family and found himself alone, this time in New York. And he once again handled the situation poorly.

10. He Spent Other People's Money

In New York, Kevin sneakily used his father's credit card to rent a suite at the Plaza Hotel, where he racked up an insane room service bill.

11. He Later Turned Into An Actual Sociopath

As this video shows, Kevin's experiences transformed him into a very troubled adult.

The bottom line is, Kevin's track record is fraught with poor decisions and bad behavior. Home Alone is a great movie, but I definitely wouldn't want to have to deal with this kid in real life.

More like this
The 'Hocus Pocus' Sequel Finally Has A Release Date & It Makes Total Sense
By Shannon Barbour and Radhika Menon
Shocked Fans & Former Co-Stars React To Ray Liotta’s Death At 67
By Grace Wehniainen
'Stranger Things' Star Joe Keery Is Dating An "Indie Scream Queen"
By S. Atkinson and Grace Wehniainen
Laura Dern Said “Cultural Awareness” Made Her Rethink This 'Jurassic Park' Fact
By Grace Wehniainen
Get Even More From Bustle — Sign Up For The Newsletter