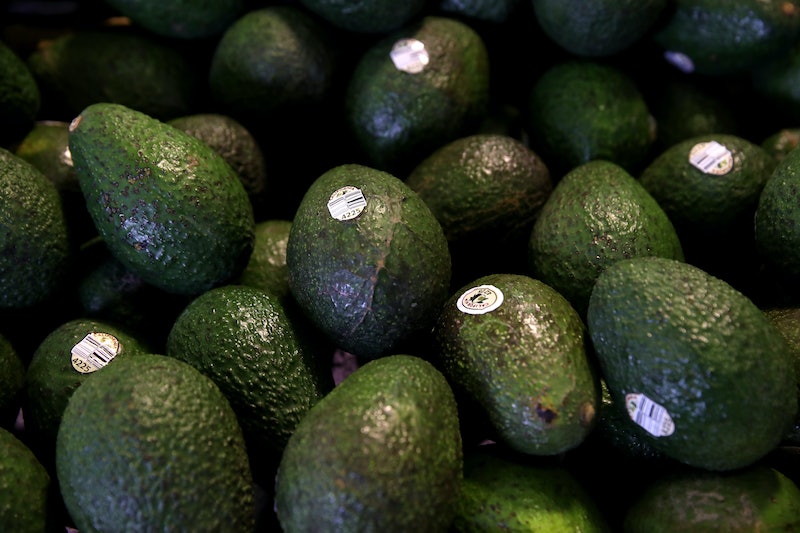 I have some terrible news for everyone who loves guacamole: There is an avocado shortage due to a heat wave in California. And since avocados are just about all that is good and wonderful in this world, it is a sad, sad day indeed. So, if you've been wondering why it's been so dang hard to get a hold of your favorite toast topper lately? Well, this is why. I'm sorry. I'm so very, very sorry. And I'm even more sorry for the environment.

Last week, Southern California was hit with temperatures above 100 degrees Fahrenheit — in some cases as high as 122 degrees. And since the region is the source of 90 percent of American avocados, that spells bad news for the avocado crop, reports the LA Times, especially when combined with winds up to 30 miles per hour. In those conditions, the sandy soil in which avocado trees are planted can't maintain moisture long enough for the trees to absorb it before it evaporates away.

So what's the upshot? Basically, expect massive avocado shortages for the foreseeable future. Some farmers say that as many as a sixth of their trees are lost, according to the LA Times' report. Many say that the fruit they will be sending to market is "dropped fruit," however — which is usually passed over in favor of picked fruit — so at least all is not lost. You'll hopefully still be able to make guacamole for 4th of July.

Long term, though, things still don't look good. Because avocados are grown on trees, the damage from this past week might have effects on avocado crops for years.

“We’ve been here for 25 years, and this has never happened before,” Jeanne Davis of Coyote Growers told the LA Times. “There will probably be a minimal amount of avocados for next year because we think that some of the flowers didn’t make it.”

Somewhat fortunately for avocado-lovers (aka everyone), though, American-grown avocados don't represent a majority of the avocados sold in the United States — most actually come from Mexico, so it's not as though there are suddenly going to be one sixth fewer avocados available. However, this much damage done to the avocado crop is likely to have an impact — and the rules of supply and demand would suggest much of that impact might be in the form of increased prices.

So enjoy your guacamole while you can.