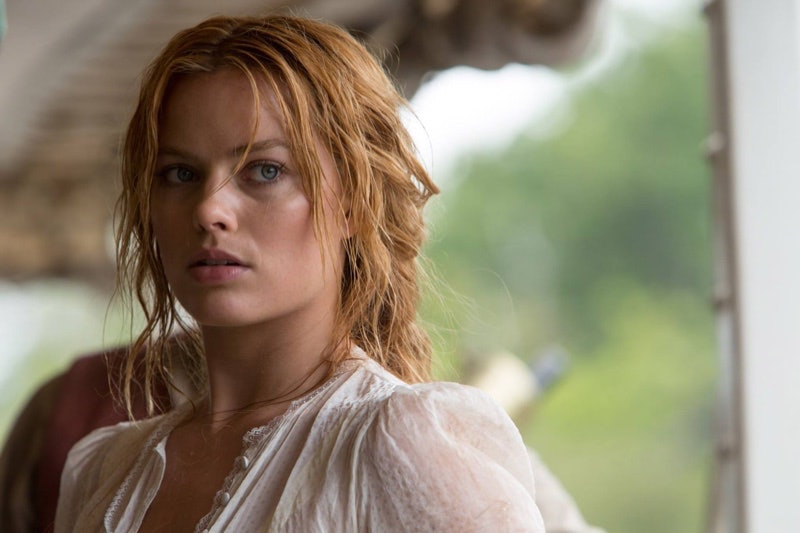 Edgar Rice Burroughs' 1912 story Tarzan of the Apes came at a time when racism and sexism were accepted, and between utilizing a "white savior" narrative, a cinematic trope in which a white person rescues people of color, and presenting its lead woman as a constant hostage, the Tarzan book and its sequels feel now more than a little old-fashioned. So it makes sense, then, that Legend of Tarzan attempted to insert some 21st-century values into the story. For the character of Jane, Tarzan's wife (Margot Robbie), that meant making her more vocal, more spunky, and more of a modern woman who expresses herself strongly, a lot different than the victimized Jane of Burroughs' original story. Even though she has all of these empowering character traits, Jane is still put in scenarios that negate some her feminist qualities. She may be a strong female character and an improvement from the original, but in Legend of Tarzan, she's still seen as a damsel in distress.

The new movie, in theaters now, picks up years after Tarzan (Alexander Skarsgard), now going by his birth name, John Clayton, and Jane have left Africa and are living in his family estate in London. Jane works as a teacher, and her happy interactions with her students, both male and female, help the film pass the Bechdel test. But Jane seems out of place in this corset-wearing, aristocratic lifestyle. In the 1972 book, Tarzan Alive: A Definitive Biography of Lord Greystoke , author Philip Jose Farmer described how, in the original tales, Jane was written as a young woman who had joined her father on various scientific expeditions and therefore was "tough and strong-minded." Yet while Robbie's Jane in Legend of Tarzan definitely features those qualities, how the film unfolds undermines their presence in her personality.

Spoilers ahead. Through a series of schemes, Tarzan and Jane are lured back to the Congo early in the film. Their reunion with local villagers and the animals Tarzan grew up with is sweet, but short. It's not long after that both are kidnapped, with Tarzan managing to escape and Jane remaining captive. To lure Tarzan to her rescue, Christoph Waltz's villain, Leon Rom, tells Jane to scream so that Tarzan will be alerted to her presence. Jane snaps back, "Like a damsel?" and spits in Rom's face. It's a bold, feisty move, but it's one of the only times in the film that Jane truly makes it clear that she can, and will, assert herself.

After the kidnapping, Jane spends most of the rest of the movie chained to the side of Rom's riverboat. They have a creepy captor/prisoner faux fancy dinner, in which Rom exerts his dominance. Jane has the opportunity to talk back to him, but doesn't. "A normal man can do the impossible to save the woman he loves," she says, for instance. "My husband is no normal man." She threatens Rom with her husband's power, not with her own, and it seems as if she's resigned herself to the fact that Tarzan rescuing her is the only way she's going to get out of this mess.

Several times, Jane attempts to escape, but none of her tries are successful, or even that promising — is she not capable of being her own heroine? No matter how bold her personality, or how vicious her vitriol against Rom, Jane still spends the majority of the movie in captivity, waiting for her husband to come to her rescue.

Even though Jane is physically strong and fiercely brave, even her own husband treats her like damaged goods. Early on, it's revealed that this is because Jane had a miscarriage. When Tarzan is first invited back to the Congo, Jane jumps at the opportunity to join him, but Tarzan tells her, "We just lost a baby," as if she needed reminding, and as if the tragic event somehow transformed her from a confident and powerful woman to something fragile and in need of protection.

As her personality occasionally shows, Robbie's Jane is not weak, but the scenarios in which she's placed don't often let her show her strength. Featuring "strong" women who run their mouths and give a few kicks is great, but they should get real, empowering storylines, too.