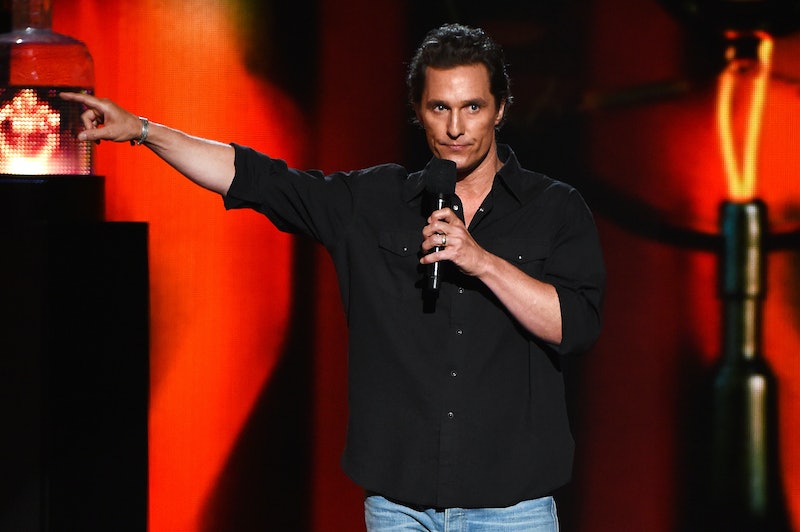 Here's a thing you probably didn't expect to happen: Matthew McConaughey will be teaching film at the University of Texas in Austin this coming fall. Well, alright, alright, alright, color me both surprised and excited. No, I'm not a student at UT, but I'm still pretty amped on the idea that McConaughey will be professor, even if I never get to take a class. Because, seriously, this is perfect. How has anyone not thought of this before?

The Texan celebrity's teaching gig was announced on UT's social media pages with a video titled "Meet Professor McConaughey." I can picture it now. McConaughey sauntering into the room probably without shoes, but absolutely with a grinning Academy Award winning smile. By the end of the term, it will be full on Dead Poets Society "O Captain! My Captain!" Someone buy the rights to this film, ASAP.

McConaughey and Gary Ross (Hunger Games director) will teach the filmmaking class at the Moody College of Communication. There will also be a higher-level class composed of 30 students who will get to watch clips of McConaughey and Ross's new movie Free State of Jones and learn all about how it was made. UT students, did you write that down? Write it down, you're not going to want to miss any of it, for these 13 (and honestly, probably more) reasons.

I can't even imagine how equally nonsensical and brilliant his lectures will be.

2. He Doesn't Care For Rules

3. He's Knowledgeable About The Subject

Who else would know film apart from one of the world's biggest film stars?

4. He Really Is An Incredible Actor

See, I don't know, all of his awards for reference.

5. He Has A Sweet Southern Accent

A drawl to make you weak in the knees, or at the very least, interested in what he has to say.

Want to know what it's like working with Jennifer Lopez or Kate Hudson or Sarah Jessica Parker? Just ask McConaughey.

Mostly on his bongos, but sometimes on his chest. Hopefully both will be incorporated in the classroom.

9. He Has A Catch Phrase

In case something were to happen in the classroom, he could rescue you with his muscular man muscles.

He's known to say things like "Life is a series of commas, not periods." DEEP.

Time and time again, McConaughey has shown us that dedication and perseverance will lead you in the right direction. He'll bring that same work ethic to teaching, no doubt.

How can you say "No, Professor McConaughey, I don't have my essay ready" to a smile like that? YOU CAN'T. It's a trick question.

Do they make Oscars for teachers? If so, McConaughey will probably win one.