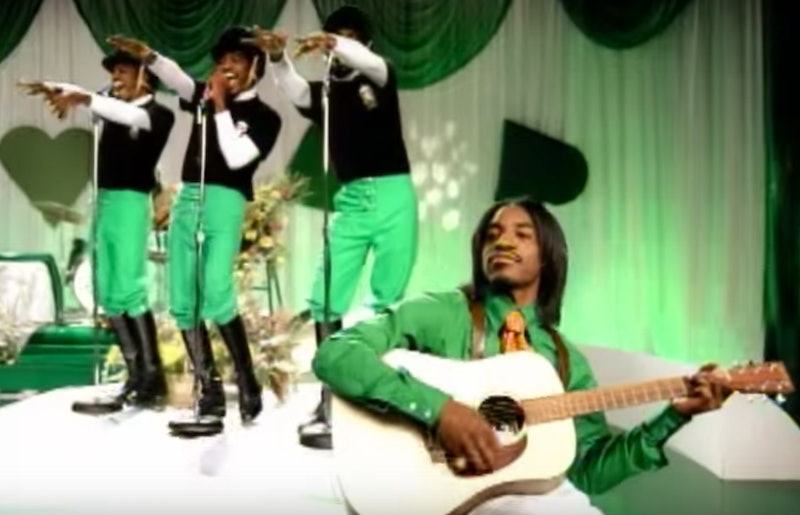 How many times have you — yes, you! — put the “Hey Ya” music video in your eyes? A bunch? Same here. (As someone who watched a ton of MTV in 2003, I'd estimate I've seen it somewhere between soooo many and a bajillion times.) (What can I say? I’m really good at coming up with a really reasonable and totally sound estimate on the fly.) Whether you’ve watched it once or 10,000 times, you’ve probably got the gist as to what happens in the vid: An all-André 3000 band performs on an Ed Sullivan Show-esque program, Big Boi plays the band’s manager, fans sitting in the audience scream in delight, fans watching the telecast on their home TV sets dance, at least one overwhelmed fan faints, and there are Polaroid cameras. And that’s that…Or is it? Just when you think you’ve got it (oh, you think you’ve got it), you get something new about the “Hey Ya!” video that you previously didn’t get at all-ah-all-ah-all-ah-all. On this fateful Thursday, Bustle editor Gaby Moss tweeted that she was surprised to see a certain famous person while casually revisiting the 13-year-old video for the universally loved OutKast track: The one and only Sebastian Valmont. Yes, Ryan Phillippe is in the “Hey Ya!” music video. And until Gaby tweeted that very important tweet, I was none the wiser.

(Maybe this “news” is old hat to you. If that’s the case, I tip my old hat and bow to you, you pop culture trivia savant, you.)

In the “Hey Ya!” video, the I Know What You Did Last Summer actor plays the host of an old-timey television program. Before all eight André 3000s take the stage and perform a rousing rendition of “Hey Ya!” for a caterwauling studio audience, Phillippe looks directly into the camera and introduces the band. You really can’t miss him.

And yet, I somehow missed him. And according to my research (read: I sent some text messages to friends), Gaby and I are not the only ones who missed him. But hey, 13 years late is better than never.