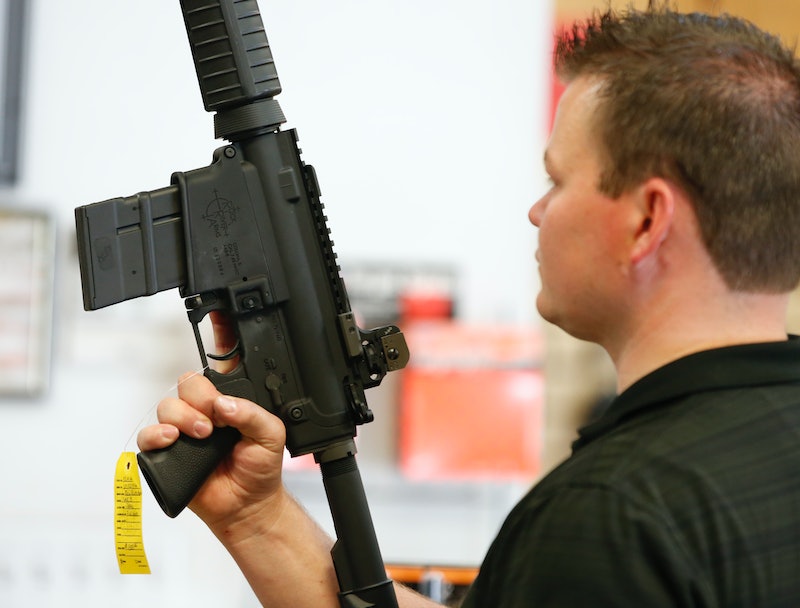 After last week's Democratic sit-in following the Orlando Pulse massacre, gun control advocates are working again to advance gun legislation once again. But what gun control bill is the House voting on now? The latest measure is attached to a larger anti-terrorism package and is meant to help keep guns out of the hands of people on terrorism watchlists. On a conference call earlier today, House Speaker Paul Ryan told Republicans that the House will vote next week on bipartisan "common sense" anti-terrorism measures to stifle radicalization and recruitment for terrorist activities, and make it more difficult for suspected or known terrorists to buy guns. But the actual bill Ryan was referring to remains unclear.

News of this latest bill came after Democrats caught wind of two Republican bills, brought to both the House and Senate floors, that focus on gun control but were allegedly written by the National Rifle Association, though the NRA denied participation.

The competing measures are different in both language and scope. While the bipartisan bill will reportedly focus on terrorism watchlists and the "No Fly" list to restrict gun purchases, the allegedly NRA-backed bill will still allow officials three days to determine if a person can purchase a gun.

Supporters of the bipartisan gun control measure could potentially be out of luck if Republicans vote on the suspected NRA bill, which would allow them to say they'd voted for gun control without actually changing anything.

While partisan feuds continue on Capitol Hill, one critic of recent gun control measures pointed out that the most recent spate of proposed gun legislation may not actually stop gun violence. Ramzi Kassem, a City University of New York law professor, said in a recent Washington Post op-ed that using terrorism watchlists as gun control criteria is heavily flawed and is more likely to further stigmatize Muslim-Americans (who are the majority of people known to be on secretive watchlists) than to actually prevent mass shootings and other gun-related carnage.

Kassem has the knowledge to back it up: He is the director of CUNY Law's Creating Law Enforcement Accountability and Responsibility (CLEAR) program, which helps get innocent people removed from these watchlists. According to Kassem's Washington Post op-ed, the only evidence required for someone to be named on these secretive watchlists is that of "reasonable suspicion," and many people who share (often Muslim) names are erroneously blocked from flying because someone with a similar name is on the list. Kassem urged readers to pay attention to gun violence data when considering the most recent gun control debate:

Although the number and frequency of mass shootings such as the one in Orlando seem to be growing, they still account for only a minuscule percentage of the approximately 11,000 yearly gun homicides in the United States. Perhaps needless to say, an even tinier percentage is the work of Muslim-identified shooters.

As gun control once again becomes a topic of national attention, it's important not only to know the language of the legislation, but its larger implications, too. While both sides of the aisle in Congress need desperately to take up the mantle of gun control, doing so under the guise of Islamophobia is unlikely to prevent as much violence as backers may hope.