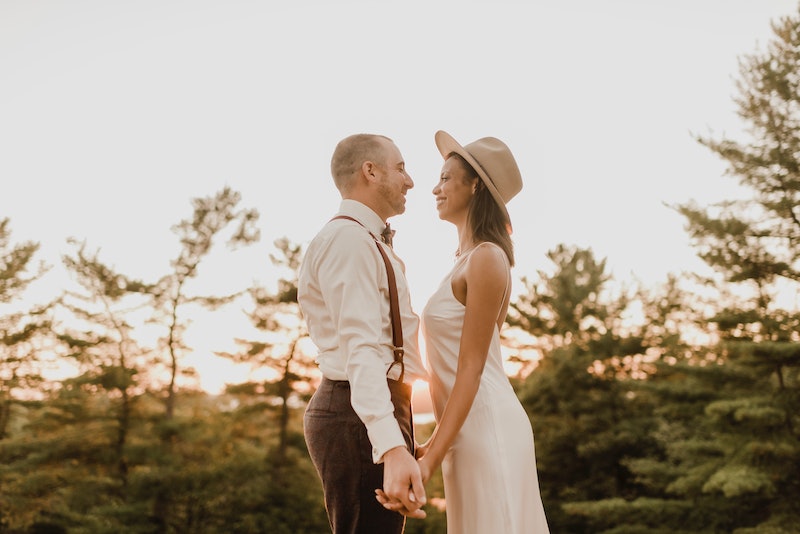 My now-spouse and I didn't have a proposal at all. We just had lots of serious discussions about whether marriage was a good idea, came to a consensus, and then bought a ring. And let me tell you, those discussions have saved our asses numerous times. Whether it's knowing what you're in for legally and financially post-marriage, comparing long-term goals and shared futures, or just figuring out whether you're skilled at partnership, a gentle set of interrogations is a damn sensible part of figuring out what's up before you go hunting for venues and mason jars.

Many guides to suitable thoughts before plunging into marriage tend to circle around the question of "compatibility," sexually, emotionally, and otherwise. However, the term is a bit looser and more problematic than it seems. Dr. Elliot Cohen writes for Psychology Today that simply lining up with a significant other in terms of interests, sex drive, and energy isn't the entire story. Compatibility is also about intellectual work, authentic relationships, basic values, and focusing on other people. Some of the questions suggested here are about investigating this conception of compatibility, but others are just about preparing you for what marriage actually means, beyond the wedding party itself.

Here are seven questions, from the practical to the emotional, to ask before making the decision to get hitched. Do you really know what you're getting into, and is your partner equipped with the skills to do it with you?

1. What Financial Benefits Lie In Getting Married?

Yes, yes, marriage is a unification of souls and a lovely romantic gesture, but you do actually need to think about the nuts and bolts of your situation. Is marriage a good idea for your taxes, your benefits, and any other financial considerations? This isn't a question designed to dissuade you from getting married; it's educating yourselves about the full value of your decision, legally and otherwise, and what benefits you'd like to gain from it. Talk to your accountant. If you don't have one, find an accountant and ask them about your situation.

It's also worth hashing out your beliefs about a prenuptial agreement. If neither party has any assets at all coming into the marriage and/or both agree to abide by the rules of the place where the marriage was legalized, this isn't particularly relevant. If, however, one party has significantly more assets or the laws where you live strike you as unfair, this is a conversation you need to have. And no, it's not unromantic. (Or even uncommon; the Wall Street Journal reported that in a survey of 1600 lawyers, 63 percent revealed an increase in prenups as their business.) Even if the possibility of your divorce seems utterly foreign, you have to recognize that the people who would divorce are likely fundamentally different from the people you are now, and they deserve to be protected and respected.

2. What Bureaucratic Changes Need To Be Made After Marriage?

Know what you're getting yourself into. Much of this depends on whether you decide to change your name and what that entails: shifting the names on identity documents, accounts, and other areas can be time-consuming, though definitely worth it in the end. Marriages may also alter your status with places like mortgage brokers and adoption agencies, so make sure you do your homework. It can even affect your credit rating, according to credit agency Experian, if you take out joint accounts together and combine credit histories. Again, this often isn't a bad thing. I just don't want you to be surprised.

If you've discussed marriage, you've likely contemplated your future together, but an in-depth confrontation of beliefs about the future and what it might involve is a necessary conversation before you put on rings. Solid shared goals, or at the very least a commitment to a future that looks vaguely the same, are necessary when it comes to certain fundamentals, like whether you'll have kids and where they'll be educated, what kind of share of domestic housework you should both do (if you don't already live together), what type of lifestyle you'd like, and what the Huffington Post calls "shared meaning," or combining future goals with emotional connection. Goals, according to Psychology Today, are one of the key ways in which long-term relationships and marriages succeed, as both partners work to create a certain vision (a big house with many kids, for example, or glamorous coupledom with lots of travel).

4. Are You Capable Of Arguing Effectively?

Effective arguments, as I've discussed previously, have many segments: they involve kindness and a separation of the person from the issue, they can be resolved without a return to the same identical argument later on, and nobody gets personal or passive-aggressive. If you don't argue properly, it's a sign that you have issues to sort out before heading down the aisle. Fixing your arguing style can be tricky, but luckily we've got your back: there are relationship argument "hacks" you can read about, or you can enter marriage counseling and use outside help to remold your interactions with one another.

5. Does Either Of You Demonstrate Contempt?

In one of the most famous studies on the future of relationships, Professor John Gottmann found that the key sign of demise in a marriage was the presence in interactions between spouses of a destructive emotion: contempt. If one spouse dismisses the opinions of the other, shows disgust or superiority towards them, or denigrates them in a way that clearly isn't based in fun, the relationship is likely not going to survive in the long run. Recognizing contempt can be difficult, but it needs to be identified and examined, either via counseling or through working as a couple, if the relationship is going to get past the honeymoon.

6. What Are Your Plans For A Shared Or Individual Crisis?

Life goes wrong. Marriage does not protect you from that. If something goes drastically, hideously awry, your concepts of shared responsibility or emotional burden will need to line up or at least be able to compromise. You should probably ask yourself: what will I do if my partner has a midlife crisis? What if they're diagnosed with a mental illness or a chronic disorder? If you become unemployed or commit one of Forbes's five marriage-destroying financial mistakes, what do you expect to happen?

A "focus on yourself" is recommended by Dr. Susan Heitler for Psychology Today in preparation for, or while experiencing marital issues; you don't need to have everything worked out, and many of your scenarios may not actually come to pass or will need to be flexible. But have your expectations about how to cope in your head; if you expect your spouse to do it on their own and they want help, this may be an issue in the future.

7. What Are Your Views On The Institution Of Marriage In General?

This may seem like an odd question, but what do you think marriage is for, and what does your partner think of the same question? The answers can be radically different. What one person sees as the logical "next step" in a long-term relationship can be another person's potentially hazardous entry into something they're not quite sure about; one spouse may believe it fundamentally changes the nature of the relationship, while the other may expect things to stay the same.

As a New York Times special on "views" of marriage found, there are many different perspectives on the institution itself, none of which are immediately obvious. Your beliefs, ideas, and predictions for married life are something to get into before you go down the aisle. If you're expecting lifestyle changes or evolutions in sex, commitment, or other areas, those expectations need to be explicit.