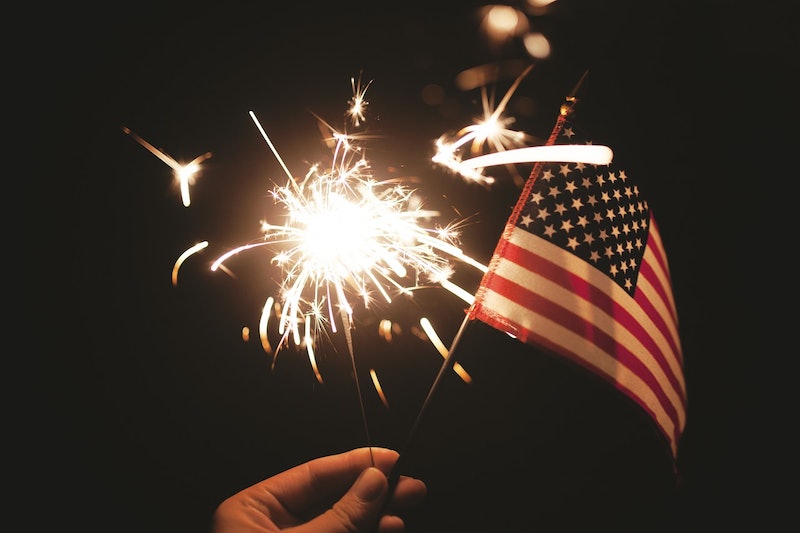 The Fourth of July is the perfect occasion to celebrate the fact that America is already pretty great, and has been since its birth in 1776. Since that very first July 4th, the history of the Fourth of July and how the celebration has evolved is interesting, and actually pretty funny. Nowadays, we honor our nation's birth with American flag tank tops, grilled meats, and patriotic speech GIFs featuring the forever sexy Bill Pullman. (No? Just me? OK fine.) But back in the day, we ate turtles, had to work, and some celebrated it on a completely different date. Yeah, all of that happened.

I wonder what the Founding Fathers would think about our current style of celebration? Would Tommy J. rock a red, white, and blue bro tank? Would Ben Franklin kick back in a beach chair with an adult beverage and debate the election with the neighbors? Someone should really make an animated series about that.

But as with everything else, before we can look ahead at where we're going to go as a free nation, we should take a moment to look back, and reflect on where we've been. So here's the wacky and wonderful history of July 4th, and some things you probably didn't know about it.

1. We Don't Even Celebrate It On The Right Day

Kenneth C. Davis, author of the Don't Know Much About book series, revealed on CBS This Morning that John Adams wrote home to his wife Abigail that "July 2nd will go down in history." But Congress didn't accept Thomas Jefferson's Declaration of Independence until two days later. So yes, the 4th is technically the official holiday, but it wasn't the intended date.

After Alaska and Hawaii became the last two official states of our country, President Eisenhower received a mass of submissions for the American flag's new design, and the winner was created by a 17-year-old high school student named Robert G. Heft from Ohio. The design was for a class project, and even though his design is still the one we use today, he only got a B- on the project in class.

3. It's Not Just An American Holiday

Amazingly, Americans consume 20 billion hot dogs per year, and 155 million of them are eaten on July 4th. So if you haven't yet planned your Fourth of July party food menu, just add hot dogs and everyone will be happy.

There's something beautiful and tragic about the fact that two of our Founding Fathers —Thomas Jefferson and John Adams — both died on July 4th, 1826. They helped make this country the strong and free nation that it is today, and their deaths cemented their legacies into our nation's history. They passed within five hours of each other.

6. It Was Not A Good Day For Turtles

While inhaling hot dogs in large quantities is part of our modern Fourth of July traditions, the Founding Fathers apparently chowed down on turtle soup. Thank goodness that tradition is no longer a thing.

7. It Took Almost 100 Years To Become A Federal Holiday

The first annual Fourth of July celebration took place in 1777, one year after the Declaration was signed. But it took Congress until 1870 to make it a federal holiday. Way to move slower than a tortoise trudging through molasses, Congress. Then in 1941, it became a paid holiday for all federal employees.

More like this
How To Protect Your Digital Privacy If You Need An Abortion Post Roe v. Wade
By Kaitlyn Wylde
How To Fight For Reproductive Rights, Based On How Much Time You Have
By Courtney Young
8 Saucy Swimsuit Trends That Are About To Take Over Summer 2022
By Allie Fasanella
Here’s What Sarah Jessica Parker’s Canned Cosmo *Actually* Tastes Like
By Emma Garza
Get Even More From Bustle — Sign Up For The Newsletter