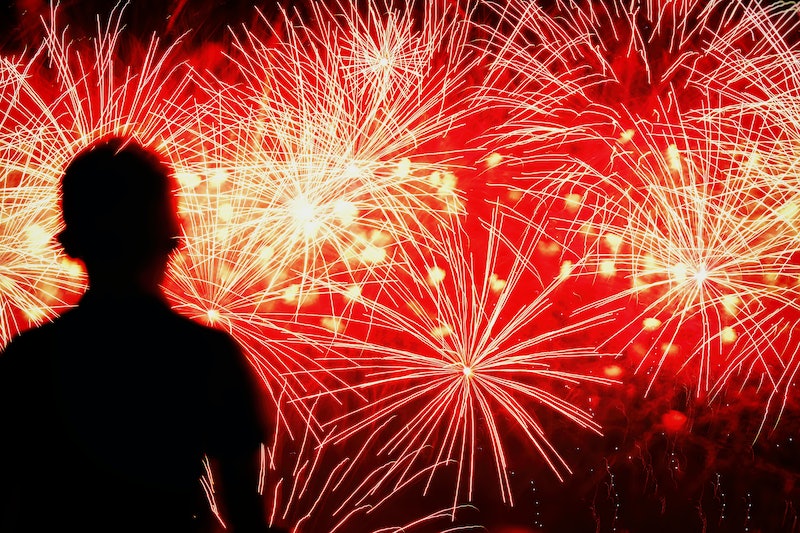 Three-day weekends in the summer often include three things: grilled foods, adult beverages, and people. But if you'd rather avoid the latter entirely (hello, my fellow introverts) then you should celebrate the Fourth of July alone. If you have the rare and amazing ability to keep yourself completely entertained on your own, what do you need other people for, anyway? They'll just eat food that you could be eating, drink adult beverages that you could be drinking, and worst of all, talk in your ear while you're trying to watch Independence Day in peace. Ugh. DO NOT SPEAK WHILE PRESIDENT PULLMAN IS SPEAKING.

So if you want to put yourself first on America's 240th birthday (and you absolutely should), skip the parties, shop online instead of in stores, avoid the beaches, and chill in your own spectacular company. Take the time to sleep as much as your body allows you to, relax, eat all the food, drink all the drinks, and do everything on your own schedule. Besides, she who has access to the internet is never truly alone. Is that how the saying goes? Anyway, here's how to celebrate the Fourth of July sans people, and still have the best time ever. It's what the Founding Fathers would've wanted. I'm sure of it.

1. Bake All Kinds Of Patriotic Goodies

Did you know you can make red, white, and blue whoopie pies, and tie-dyed fudge? I didn't either, until the internet exposed me to the prettiest desserts ever. So find treats that are on theme but also delish, and make 'em all. And then immediately eat them all without having to share with anyone.

Obviously, you have to start with Independence Day, because duh. Also, because Bill Pullman. Then get after it with other classic '90s summer movies like Now and Then, The Sandlot, and Twister.

No matter how much you sleep, most likely, your body could use some more. So take this long weekend and let yourself get all caught up. It's the American way to be overworked and overtired, but it's also the American way to do whatever the heck you want, so make sure sleep is in there somewhere.

What do you want to do this summer? Did you make a list? If you haven't yet, now's the perfect time. Everyone is doing something this weekend, so if you're looking to avoid people, plan your adventures instead, and then schedule them on the less chaotic weekends ahead.

Is there anyone on TV more American than Ron Swanson? The correct answer is no. He really embodies everything we stand for as a nation, so sip on some whiskey, enjoy a nice juicy steak, and keep everyone at a chilly distance. Because nothing is any of their business anyway.

Make sure whatever you choose to do, that you are constantly cloaked in red, white, and blue attire. It's a requirement of this weekend.

7. Read All The Books

The best Americans are the ones who choose to be the most informed. And if you're an introvert, then you've probably got a stack of books burning a hole through your nightstand, so open those pages and get crackin'.

8. Open A Bottle Of Wine

Once you're 21, this is your right, so embrace it. Especially if you don't plan on leaving the house, pop open that bottle and slip into a wonderful wine-induced chill sesh.

So you might not be down to hang with the girls this weekend, or maybe they aren't even around. But summer is made for BFF vacations, so make sure you get one on the calendar. You won't regret it.