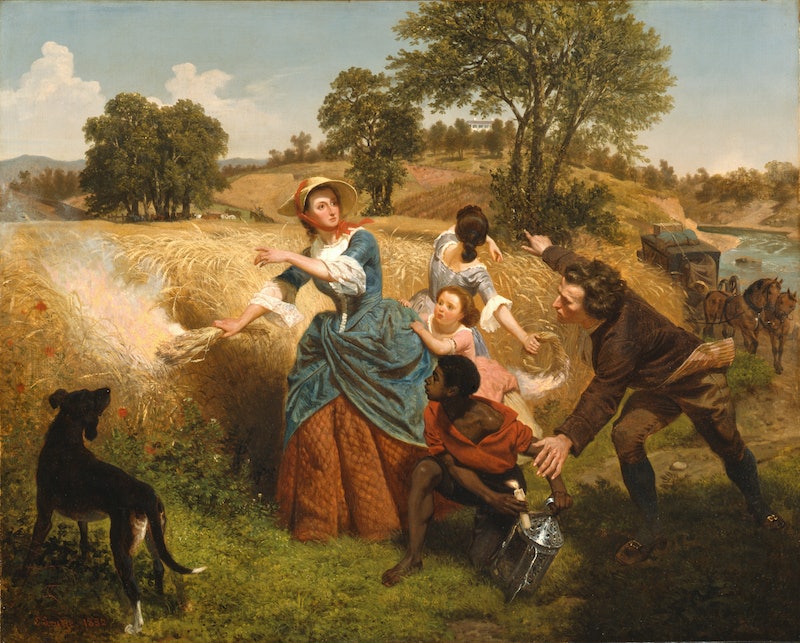 In March 1776, in a spirited correspondence with her husband over the possibility of declaring independence, future First Lady Abigail Adams implored her husband, “I desire you would remember the ladies.” Unfortunately, neither the Founding Fathers nor subsequent generations did a very good job of that. But revolutionary women made substantive, varied, and critical contributions to the cause of American independence. They raised funds, protected homes, nursed soldiers, sewed uniforms, ran farms and businesses, took up arms — sometimes even disguising themselves so they could serve— advised important men, opined on the philosophies of the day, and wrote some themselves.

Even Lin-Manuel Miranda’s Hamilton: An American Musical , the boisterous show that has taken the nation by storm and created an obsession with the country’s first treasury secretary, Alexander Hamilton, takes a jab at the reality of America’s forgotten women with the refrain of “…and Peggy!” during one of its signature songs, The Schuyler Sisters. But what works as a humorous narrative device on stage begs the question: who was Peggy Schuyler (Marguerite “Peggy” Schuyler Van Rensselaer)? She was the youngest daughter of a Continental Army general, and she married one of the wealthiest men in New York. Sadly, she died very young, but she still did more than the show’s throw-away line suggests.

So let’s take a moment this Independence Day to remember these colorful ladies who made important contributions to America’s past.

Patsy Jefferson was the eldest daughter and constant companion of U.S. third president, Thomas Jefferson. After being chased from her home by the British Army and forced into hiding with her father, then the governor of Virginia, she traveled to Paris with her father while he was Minister to France and managed Monticello during his many absences while serving as Secretary of State and President. She also served as hostess — a precursor to First Lady — during his presidency in Washington, DC. When her father died, Patsy was responsible for editing his papers and shaping his legacy. Much of what we know about Thomas Jefferson is what she allowed us to know, a story detailed in our America’s First Daughter .

Catherine Schuyler was the wife of General Philip Schuyler of Albany, New York. During the French and Indian and Revolutionary Wars, she ran the extensive Schuyler farms in her husband’s absence and fed and nursed British and Native American troops who encamped on their lands. During the 1777 Saratoga campaign, Catherine rode in the direction of the encroaching British Army and set fire to her family’s crops to keep them from falling into enemy hands. Catherine’s daughter, Eliza Schuyler, married Alexander Hamilton, who became Secretary of the Treasury under President Washington. Eliza served as a sounding board for Alexander’s ideas and writings, including the Federalists Papers and George Washington’s Farewell Address, and she copied some of the Federalists Papers for Alexander to distribute. After her husband’s death in an infamous duel, she engaged in charitable work, including founding orphanages in Washington, DC, and New York City.

Sybil Ludington, the daughter of Colonel Henry Ludington of Dutchess County, New York, is the female counterpart to the more famous Paul Revere. British troops attacked the nearby town of Danbury, Connecticut, in late April of 1777, and set about selectively burning houses in the town. A rider alerted Colonel Ludington, whose militia were disbanded for the planting season, but was too tired to continue and too unfamiliar with the area to sound the alarm. So 16-year-old Sybil set out alone for a 40-mile horseback ride to alert the militia and call them back to fight. Colonel Ludington’s men helped force the British retreat from Connecticut.

Esther de Berdt Reed was born in London but married an American and moved to Philadelphia, where she established a ladies organization that raised $300,000 dollars for the troops by going door-to-door for donations. At General Washington’s suggestion, The Ladies of Philadelphia bought linen to sew shirts for the American troops at a time when the Continental Army was always undersupplied.

Molly Pitcher was less an individual woman than a legend that encompassed the frontline participation stories of many women, like Mary Ludwig Hays, a Pennsylvanian who followed her husband in the army during the Philadelphia Campaign (1777-1778). While Ludwig fought at the Battle of Monmouth, Mary made countless trips to a nearby spring to fetch pitches of water for the soldiers to drink and to pour over their cannons to cool them down. When her husband collapsed, she dropped her pitcher and took his place, manning the cannon throughout the remainder of the battle. Another Molly Pitcher might’ve been Margaret Cochran Corbin, a wife and camp follower at Fort Washington in November of 1776. During the British assault on the fort, her husband John was killed in battle, and Margaret — known as Captain Molly — took his place as gunner until she was severely injured herself. Margaret was the first American woman to receive a pension as a soldier.

Mercy Otis Warren was a poet, playwright, and historian personally acquainted with most of the revolutionary leaders. After her brother was brutally beaten by colonial revenue officers in 1769, she was drawn to political activism and hosted protest meetings at her home that resulted in the organization of the Committees of Correspondence. Her earliest plays were scathingly critical histories and satires of British conduct during the revolutionary conflict. After the war, she continued to publish plays, poetry, and multi-volume histories, including the first history of the Revolutionary War by a man or a woman, and advocated on behalf of women’s rights.

Phillis Wheatley was the first African-American poet to be published. Forced into slavery in Africa, she was sold to a Boston merchant family who tutored her in reading and writing and, recognizing her talent, facilitated an advanced education and her efforts to become published. Boston publishers refused to publish her work, and many whites questioned her authorship, but in 1773, Phyllis traveled to London where interest in her and her work was high and she was able to publish her Poems on Various Subjects, Religious and Moral. In 1775, she sent a poem to George Washington, who praised her “poetical talents” and invited her to visit his headquarters in Cambridge, Massachusetts, which she did. As the revolution gained support, Wheatley’s poetry included themes that expressed the colonists’ rebelliousness and discontent. In 1778, she was freed upon her master’s death.

Mary Young Pickersgill was a Baltimore businesswoman and humanitarian who made the flag that became the inspiration for Francis Scott Key’s poem that became the U.S. national anthem. Born in Philadelphia in 1776, she learned her flag-making skills from her mother, who made flags and standards during the Revolutionary War. Just weeks before the September 1814 Battle of Baltimore, Major George Armistead, commander of the forces at Fort McHenry, commissioned Mary to sew a flag “so large that the British will have no difficulty seeing it from a distance.” In just six weeks, she worked with five other women to hand sew a 30’x42’ flag containing over 400 yards of fabric that could be seen for miles from the fort. You can visit the flag at the Smithsonian Institution’s Museum of American History.