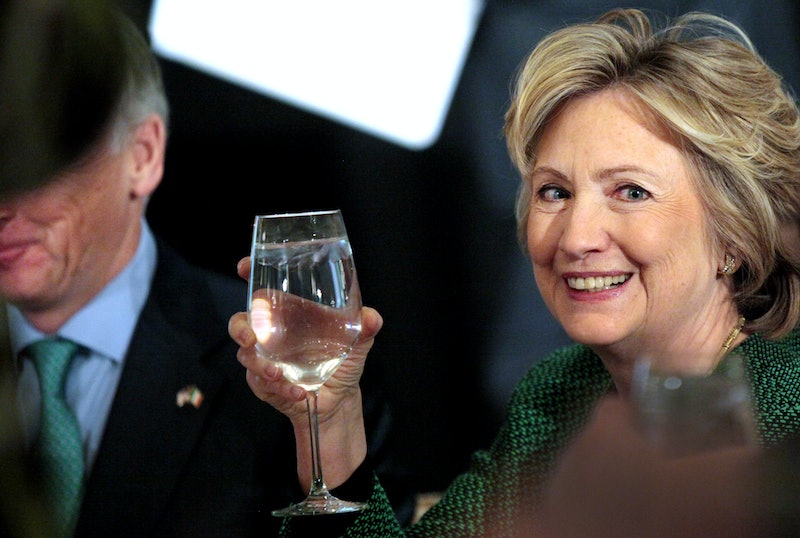 Presidential candidates, they're just like us. While snark-loving feminists around the internet braced themselves for the Toast's final day, so too, apparently, did the presumptive Democratic nominee. But while we were all busy wondering where we'll get our fix of culturally-minded droll humor come Saturday, Hillary Clinton was busy penning her own tributary goodbye to the Toast co-founders Nicole Cliffe and Mallory Ortberg. In a short but sweet farewell toast, Clinton thanks The Toast for making room for women and encourages others to "keep giving them hell."

Before you dismiss Clinton's guest appearance on The Toast — which notified readers in May that it would cease to produce new content with any regularity on July 1 — as some sort of last-day gimmick, Cliffe makes it clear it was Clinton who wanted to write something for the site, having become familiar with it through her staff. The presumptive Democratic nominee, who, as the first woman to head the presidential ticket of a major political party, is blazing a new road for women, praises The Toast for giving women a space to speak up in. "In nearly every industry, from publishing to scientific research, women have had to forge their own paths against overwhelming odds and less-than-friendly welcomes," Clinton writes.

She likens the community The Toast forged to dinner parties Sen. Barbara Mikulski would hold for female senators in the early 2000s. "I've always had great admiration for women like Barb who take it upon themselves to create spaces where women can speak their minds freely," Clinton writes. "With this site, Mallory, Nicole and Nikki did the same for so many women — and they made us laugh and think along the way."

In celebrating all that The Toast was, Clinton encourages its female readers to carry on the spirit of the publication and fearlessly continue to add their voices to the world's often male-dominated discourse. "As we look back at what this site has meant to so many of you, I hope you'll also look forward and consider how you might make your voice heard in whatever arenas matter most to you," she writes, asking women to boldly bridge the so-called confidence gap. "Speak your opinion more fervently in your classes if you're a student, or at meetings in your workplace. Proudly take credit for your ideas. Have confidence in the value of your contributions."

Clinton's final word of advice to Toast readers? If there's not room, make room. "If the space you're in doesn't have room for your voice, don't be afraid to carve out a space of your own," the presumptive nominee concludes. "You never know — you might just be the next Nicole Cliffe, Mallory Ortberg or Nikki Chung."