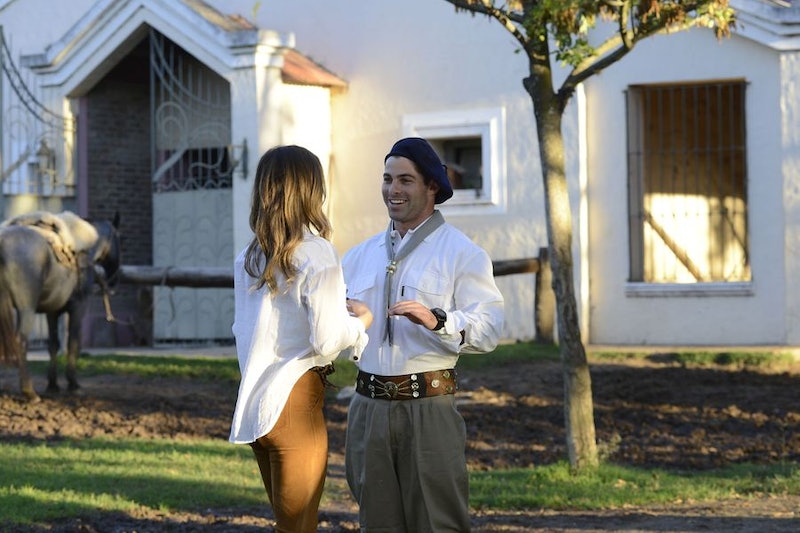 Now that the numbers are dwindling on The Bachelorette, I can finally get to know some of the guys on the show (though, let’s face, most are not long for The Bachelorette world). It’s just easier to follow five guys on Snapchat and Instagram than it is to follow 25, you know? Now that Alex Woytkiw has continued on the journey to becoming America’s next top Bachelorette choice, I’m curious about all of his social media channels. Snapchat is kind of a new thing for reality stars (and for all brands, frankly, though Bustle is ahead of the curve with their cool account @bustledotcom). So, if you’re following Alex just on Instagram or Twitter, you may have a question — What is Bachelorette star Alex's Snapchat name?

Alex’s last name is pronounced “why-kew,” so it’s pretty unsurprising that he uses “yq” in all of his social profiles. No one wants to learn how to spell Woytkiw the right way, dude. You can find Alex on Instagram at @alexander_yq, Twitter at @real_alexyq, and Snapchat at @hahayq. Snapchat is by far one of the most entertaining of the social mediums — you can’t stage a Snap like you would a ‘Gram.

On his account, Alex’s family plays a prominent role in his Snaps — remember his twin brother, Adam? Alex said the whole reason he went on The Bachelorette was so he could find a love like the one his brother has with his wife. Well, like all twins, they basically speak their own language with each other, and it’s hilarious to watch. I think that all of Alex’s Snaps should feature him and his brother as a buddy/brother duo. Here are a few adventures I think they should have on Snapchat.

Alex & Adam Have To Switch Places

Alex and Adam are identical twins, so I’d really like to see a sort-of Sweet Valley High/The Parent Trap swap in a restaurant bathroom with these two, and all on Snapchat.

So, they’ve kind of already done this in a Snap story, but I need to see more. The Snap story was just Alex and Adam screaming in a car, singing songs, talking about all the Sonic food they want to eat, and I was riveted, okay? I wanted more. The one thing I would change though is to have the person who is not driving doing the snapping. Unsafe if it’s the driver.

Alex Sends Adam To The Men Tell All

I mean, this would be fun to watch, wouldn’t it? We haven’t really met Adam so much, so I think letting him loose in the inevitable fight that Chad and Alex/Adam are bound to have on The Men Tell All (should he not make it to the finals) would be must-see Snapchat TV. Plus, I’m sure Alex is so sick of hearing about Chad that he needs a break from my favorite cold cut eater.

More like this
JoJo Fletcher & Jordan Rodgers Got Married In A “Playful & Fun” Wedding
By Grace Wehniainen
Becca Tilley Confirmed Her & Hayley Kiyoko’s 4-Year Romance With A Heartfelt Note
By Brad Witter
Twitter Is In Utter Meltdown After 'Derry Girls’ “Poignant” Finale
By Sam Ramsden
What’s New On Netflix: 'Stranger Things' & 'Somebody Feed Phil' Return
By Arya Roshanian
Get Even More From Bustle — Sign Up For The Newsletter