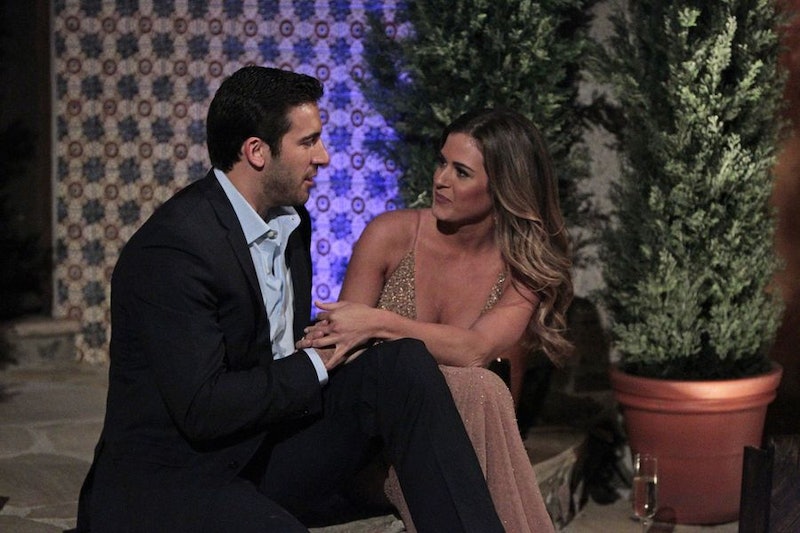 When every season of The Bachelor and The Bachelorette is billed as the most dramatic season in history, it's natural for some fans to wonder just how much of the reality series is, well, reality. How can each installment manage to top the last? However, those fans will be relived to hear that in an interview with Bustle, Derek Peth says The Bachelorette is so real, that's what surprised him most about his experience as a contestant. "I was very skeptical going into all of it," Derek admits, explaining that he had never watched the show before his younger sister, a longtime fan, sent in an application for him without even telling him.

But once JoJo's season actually started, Derek was surprised, "to actually have a real connection and realize how it was not some fake BS," he says. "If you haven’t been on the show you don't understand, there are only so many things that you can really say outside of just ... it was very real." In fact, the former contestant now finds himself defending the series to viewers. "People are instantly asking questions about the fakeness of it," Derek says about being approached by fans. "And it’s like, ‘woah woah woah … you're making me out to be an actor, and believe me, I’m not a good actor.'" However, that doesn't mean being on The Bachelorette is like dating in real life.

For example, Derek says that his one-on-one date with JoJo, her first of the season, actually lasted about 14 or 15 hours — not exactly the average length of an off-screen first date. But Derek agrees that unusual aspects of dating on The Bachelorette like this likely contribute to the emotions being so real. "The other thing is, you obviously — well, you don’t have to, but I chose to — make it what it was and open up in ways that you typically don’t on the first date, and talk about things that are normally like fourth, fifth date questions."

Not to mention that dates on The Bachelorette are designed to be as romantic as possible. The amount of work that goes into filming the series was actually another thing that surprised Derek. "I was a little awestruck by the amount of people involved," he says. "It’s really amazing how much they throw into making sure everything is done perfectly and done right. Every new location that we would go to ... they would have already been there for like a week, prepping for everything. I think that’s pretty awesome, to see how much they really put into it and that they’re not just kind of showing up somewhere, they really get things as perfect as possible."

That aforementioned one-on-one date, when Derek and JoJo made a series of choices that could lead them to different date scenarios, may have even seemed a little too perfect to those of us watching, but Derek assures me that they were really making those decisions as they went. "We really were and it comes across as a little bit fake," he says with a laugh. Of course, there were some moments we didn't get to see. "There was a lot more talking. They kind of just showed us making a decision, but we would kind of talk about it before that. Obviously, they had to compress it a little bit, to put it on TV."

Unfortunately, that need to "compress" things for time extends beyond dates, as Derek says that there were aspects of some contestants' personalities we didn't get to see on TV. "I don’t call it editing, really it’s like a compression," he says, before explaining:

"For myself, I wish that maybe some of my sarcastic side would have been shown a little bit more, my goofy sarcastic side. But is that relevant? No, it’s not that relevant, who cares? All that mattered really was in the moment, building the relationship with JoJo or attempting to. Some people were worse than they actually were portrayed, even though they were portrayed pretty poorly, and most of the rest of us, I think it’s a pretty straight-shoot, exactly our personalities, just in a compressed format."

So while the "compressed" versions of people and dates you see on The Bachelorette may be the result of an entire team working hard to make sure that every single detail is just right and can fit into an episode of television, the emotions that come out of those perfect moments, at least for Derek, are completely real.